This morning my sister, who is training to hike the Grand Canyon in May, and A., who is not training for anything but is nonetheless always up for hiking, set off to be all healthy and vigorous and hike in the mountains. I was invited, but decided yesterday that dragging myself up a rocky path in the Arizona sun didn't sound nearly as good as going shoe shopping with my mom. So that's what I'm doing today, because my black sandals are broken right across the sole and I have this feeling the sandal selection in Tucson may be just a tad more expansive than the sandal selection in upstate New York at this particular moment in time. And I'm on vacation, so I don't even feel guilty about punking out.

I love being on vacation.
Posted by Kristin @ Going Country at 9:33 AM 8 comments:

Labels: all about me, confessions, family, the A team, travelin'

A. arrived yesterday, on time and mostly unscathed by his air travel, except for his irritation at the trio of obnoxious assholes behind him on their way to a sprinkler convention or something who spent the whole three hours talking about strip clubs, massage parlors, and Awesome Times They Got Wasted. Nice.

But! He did arrive. And fell into bed at 6:30 local time last night, so yesterday was not much of an exciting day. Today, however, we had big plans. Museums! Farmers market! Visiting my grandmother! We missed the farmers market, my grandmother was asleep when we arrived, and the museums were interesting, but the real highlight of the day? Bookman's.

I LOVE Bookman's. I had totally forgotten it existed, but now that I'm reminded of its existence, I really, really wish we had such a thing in New York near our house. Bookman's is a local business with a couple of locations in Tucson. It's a bookstore mostly, though they have other media there, too. But the best thing about Bookman's is that it's all used books. AND, you can bring in your old books, CD's, movies, etc. and exchange them for new (used) ones. I love this concept. AND AND, it's huge. It's like a used book superstore. They also have those cushy arm chairs and don't care how long you sit to read. Plus, the employees are all bearded dudes in tie-dye and Birkenstocks, or girls in long, flowy hippie skirts and lots of piercings. Bob Marley is played heavily in the store. It's got a good vibe, man.

And books. So many, many books. For cheap. A. got an old textbook entitled "Sheep Science" and one of the multiple "Dune" books, and I found a few frothy paperbacks for the plane. Six books for $30. We could have stayed there all day browsing, but we had museums to get to, culture to absorb. So we reluctantly moved on.

I would totally open a Bookman's franchise near Blackrock, except where would my employees come from? No one back home wears tie-dye and Birkenstocks. Work boots and Carhartt apparel just wouldn't do it. I guess I'll have to keep coming to Tucson for my Bookman's fix.
Posted by Kristin @ Going Country at 4:00 PM 6 comments:

Labels: all about me, randomness, the A team, travelin'

File This Under: Things I Do Not Miss

I love coming to Tucson to visit my family. The sun is always shining, the air is always dry, the gin and tonic flows like water. What does NOT flow, however, is the traffic. Traffic in Tucson is Not Good. The roads weren't built to hold the volume of traffic that has come with the influx of people to the area. In the time is takes me to drive from Blackrock to The Small City, a distance of 25 miles, I can go about 10 miles here. I had forgotten about sitting through three traffic light changes to get through the light. I had forgotten about multiple lanes. I had forgotten about having to be in the correct lane at least a mile before turning, or else there's no way you'll make it to the side of the road you need to be on.

I didn't miss any of this. But that's the price to be paid for 65 degrees and sunny in March.
Posted by Kristin @ Going Country at 8:23 AM 2 comments:

Labels: all about me, family, travelin'

Meanwhile, Back at Blackrock 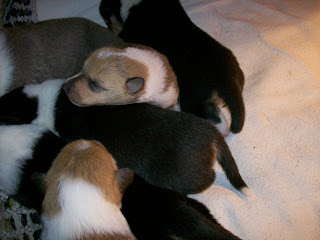 I'm told they look less like guinea pigs by the day. Everyone say thank you to the MiL for figuring out how to take and send photos to me to post.

Here in my own private desert paradise it was 65 degrees and sunny yesterday. My sister, brother, niece, and I went for a hike. Well, my niece did not so much hike as dangle from a backpack carrier, seeing as how she's only 9 months old and still in the Frankenstein lurching phase of walking. She did pretty well on the hike. She didn't reach the total meltdown point until about an hour in. Then we pretty much ran back to the car, because hiking with a screaming baby sort of defeats the purpose of relaxing in nature. It was fun anyway, though.

A. arrives tomorrow to begin Phase Four of my trip (Phase 1=New Orleans, Phase 2=Driving, Phase 3=Tucson, Phase 4=Driving around Arizona with A.). Who knows what exciting, madcap adventures we'll have? Stay tuned for Going Country: The Desert Adventures!
Posted by Kristin @ Going Country at 7:19 AM 6 comments:

Labels: all about me, animals, Blackrock, cuddly things, dogs, family, MiL, the A team, travelin', weather

Back In the High Life Again

I marked a momentous occasion last night: The First Gin and Tonic(s) of 2009.

I don't drink gin and tonic in the winter. It's a summertime and the livin' is easy kind of drink. I have to wait for warm weather to get back to the G&T. Warm weather is slow in coming at Blackrock, but here in Tucson? Feels like gin and tonic weather to me!

So my G&T and I climbed the spiffy spiral staircase to my parents' roof at happy hour yesterday and took in the view. 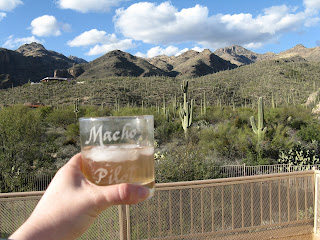 No, it does NOT get any better than this.
As you can see by my glass, I was a Macho Fighter Pilot last night. And those are saguaro cactus (cacti, really, but that just sounds stupid) back there. Nice view, right?

It was also a very nice gin and tonic. My vacation has officially begun.
Posted by Kristin @ Going Country at 9:57 AM 12 comments:

I Know This Much Is True

I would be a terrible long-distance trucker. Not that I didn't already suspect that perhaps cross-country transport would be an inappropriate career choice for me, but this trip has confirmed that suspicion.

My dad and I drove from San Antonio to Tucson yesterday. That would be 928 miles. Let me repeat that: 928 miles. We were in the truck for 13 hours, and we were stopped to get gas and pee for a total of 27 minutes of that whole 13 hours. Yes, we kept track. I'm surprised we were able to get out of the truck without assistance by the time we got to my parents' house in Tucson.

But! The odyssey is complete, all persons and items have survived the trek intact (if a tiny bit stiff and sore--that would be us, not the items in the truck), and we didn't have to sleep in another hotel last night, which is why we pushed on all the way to Tucson instead of stopping in El Paso as per the original plan. We'll unload the truck today and return it. I will not give ita fond farewell.

I can now put all of that behind me and concentrate on more fun things. Like the birthday cake for my dad that is in the oven at this very moment and the birthday celebration with my family tonight that will include dorky hats and noisemakers, because it's a family tradition.

It's good to be with my kinfolk.
Posted by Kristin @ Going Country at 8:40 AM 8 comments: