Friday Food: In Which I Can't Take the Heat


Unfortunately, I couldn't entirely get out of the kitchen, but I sure did my best to stay out of it as much as I could.

Long version: We got back to Blackrock at 5:30 p.m. after our arduous moving experience at our rental house to find that the MiL had prepared dinner. She had marinated country-style pork ribs in soy sauce and fresh ginger, then baked them with chopped garlic scapes.

The rice was plain, the broccoli was steamed, and that meal pretty much saved me and A. Both of us needed some strengthening after a whole lot of physical labor and not a lot of food in a 36-hour period.

Long version: Yes, we had winter squash in June, and no, I do not live in the southern hemisphere.

See, what happened was, the kids went into the Secret Stair as soon as we got to Blackrock, as children will always do with a secret stair. In the Secret Stair, Charlie discovered a Jarrahdale pumpkin the MiL had stored there last fall and then forgotten about.

That tends to happen on the Secret Stair, as I well know myself.

It looked remarkably good, so the MiL halved it and cooked it in the oven before we entered our Hell Week of temperatures over 90 degrees every day. Unfortunately, she was gone in the evening when it was done, so I took it out and apparently it was slightly underdone. And then we didn't want to run the oven for a long time again, because Hell Week had begun. Oops.

So I put some of it in a Pyrex dish with a lid and microwaved it with a little added water and bunch of butter. It was fine.

I ate the leftovers cold on Sunday morning, which sounds like it would be gross but was actually very satisfying on a hot, steamy morning when hot food is very unappealing.

Long version: It was hot. Tuna salad is not. Neither are tortilla chips, salad, and the rolls from the communion bread the MiL had baked for church the day before. The perfect meal for imperfect weather. 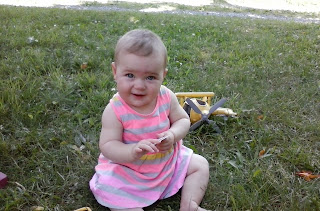 And here we have the perfect baby. Well, except for that whole "teething and not sleeping" thing. I could do without that.

Short version: Too hot. Much, much too hot.

Long version: My plan was for Italian sausage and fried potatoes, but it was 98 degrees that day and it rained right before dinner, which only caused the kitchen to feel as if it had been transplanted to the tropics. And not in a good way. I refused to stand over a skillet that was spitting grease for half an hour.

I made scrambled eggs, microwaved some tortillas with cheese, cut up some of the white carrots* Charlie had picked out at the farmers market, and called it dinner. No one complained. 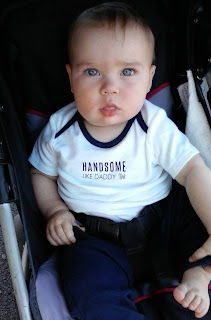 This one might have some complaints about her shirt. Luckily, she can't talk yet.

Long version: It was really still too hot to be frying things, but the sausage needed to be cooked and it was at least not as hot and humid as the day before. The vegetables were all bits of things I found in the refrigerator. Not a lot of any one thing, but taken together they all made a satisfying dinner.

The peas were starchy because they were the last pods the MiL gathered before pulling the plants in anticipation of the heatwave. They were fine stir-fried with the scapes, though. I guess that cooking method is better than steaming or boiling for overly mature peas.

One benefit of the excessive heat is that I don't have to worry about under-salting my food, as the sweat dripping down my face at every meal provides plenty of seasoning right there at the table. So convenient.

Long version: Jack and I were the only ones eating, as the MiL was going to a party, Charlie was sick, Poppy still refuses anything but Mother's Milk, and A. and Cubby were in New Mexico.

I had considered making pasta, but thought better of boiling a big pot of water in an already-steamy kitchen.  Eggs again it is, then!

I let Jack help me stir around the potatoes in the skillet and also cut the eggs on his plate with a butter knife, so he didn't notice that this was a total cop-out dinner. The Klondike bar he had for dessert helped, too. 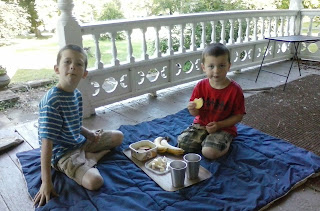 A festive Fourth of July porch picnic for breakfast, before Charlie wilted and the rest of the day kind of sucked.

Long version: Once again, Jack and I were the only ones eating. I had taken a ham steak out of the freezer, but when the moment of truth came, I just couldn't make myself turn on a burner and start cooking. So we ate crackers, and summer sausage, and bread and butter, and yogurt with black caps, and it was fine.

Today is the first day in a week that we don't have a heat advisory. It's going to be a chilly 74 degrees. Maybe I'll actually manage to produce something worthwhile in the kitchen. Here's hoping.

* Which never fail to make me think of Bunnicula, and thus always amuse me.

Scenes from a Blackrock Summer 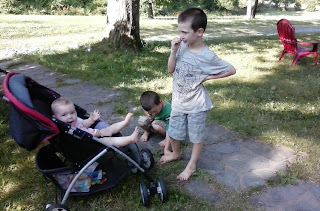 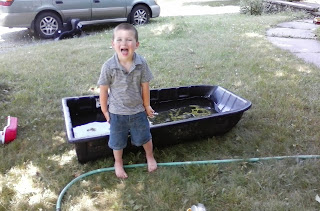 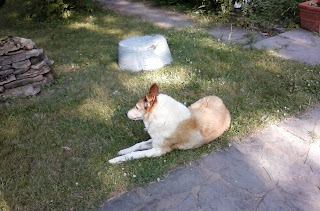 And trying desperately to stay cool.


Man, yesterday was a challenge. After the last-minute rush of getting A. and Cubby on the road by 9 a.m., the MiL and I took the remaining kids with us to the dump and then to the farmers market.

I was so exhausted from the previous two days of moving and not sleeping that I kept just dozing at random times throughout the day in whatever chair I was sitting in at the time. Also, yesterday was the first day of hot weather, and I sweated all damn day, often with one or more children on my body who were also sweating.

I turned on the upstairs air conditioner in the afternoon and took a shower after I (fiiiinally) got the children to bed. Poppy was up a few times last night, but because I was able to get to bed before 11 p.m.--unlike the previous two nights--and stay in bed until 6 a.m., I actually got some sleep.

The MiL took Charlie and Jack to church with her this morning. Poppy fell asleep about half an hour after they left. I made some yogurt, hung up my laundry on the clothesline, and am now sitting in the air conditioned parlor eating a stir fry I made entirely of leftovers I found in the fridge (pork, garlic scapes, broccoli, rice, and the sauce from the pork).

I am cool. I am clean. I am somewhat rested. I am eating an uninterrupted and delicious meal. And it is quiet.

A balm for the soul. Amen.