Last night when I was relating to A. how I stopped Jack from pounding on the bare wood floor downstairs with a toy, I noted that the floors seem to be pretty indestructible. He told me that they're made of maple, like a bowling alley.

YES. EXACTLY. That's what they reminded me of. 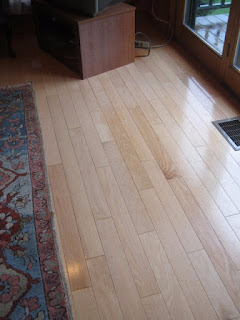 All we're missing is the gutter.

And now, because I know you (where you=my mother) want to see more photos of the house . . .

This is a very blurry photo of the upstairs living area, kitchen, and front door. I was standing near the door leading to the elevated porch. 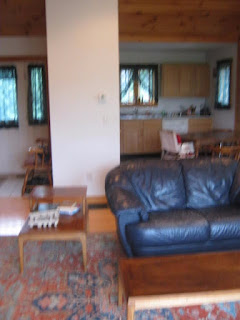 This was the first place we put a rug. It made everyone much happier immediately, including Mia, who was wondering where the hell she was supposed to lie down in this godforsaken hard place.

Standing by the front door looking into the living room. To the right, you can see the Toddler Safety Nightmare Stairs descending to the lower floor. 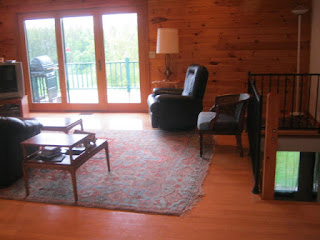 Someone will fall down these stairs eventually. I can only hope he doesn't fall too far.

Maybe I'll take some photos of the lower level later to share with you. Try to contain your excitement.

* This song has been in my head ever since the conversation with A., but I really shouldn't be going around singing "We're gonna scooore tonight." Though I suppose the children are too young for the innuendo.
Posted by Kristin @ Going Country at 6:12 AM 3 comments:

Labels: the A team, the great white north


I've never considered my children to be particularly dependent on technology for entertainment. They aren't really, but I sure am. Specifically, I am dependent on the occasional cartoon to get them out of my face for 25 minutes. But since coming to our cabin in the woods, I have not had that luxury and it is driving me mad.

I ordered a Blu-Ray/DVD player, but the TV at this house is so old that I can't connect the fancy new machine to it. There's a really old DVD/VCR combo machine here, but the DVD tray won't open. My Chromebook has no CD/DVD player on it. So that rules out DVDs.

We had the landlady cancel the TV service, because we never watch it. Because the kids always watch DVDs or something online. We had no internet service until yesterday.

We had nothing. NOTHING. A. has been gone since Tuesday night and the kids have been CONSTANTLY in my face since then.

I've been able to distract them for a little while here and there with some fun stuff. 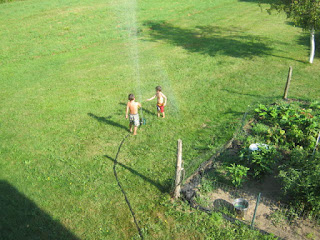 Hooray for the sprinkler! 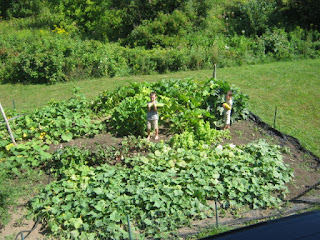 Can you see how big this zucchini is? About as big as Jack. They found several enormous zucchini and summer squash and spent a significant amount of time pounding on them with rocks, chucking them into a cooler full of water, and throwing them at each other.

They also spent quite a bit of time pretending they were camping under a group of big pine trees by the porch. We've been to the library in the village. We're going to the pool in the village today. And I made some bread. 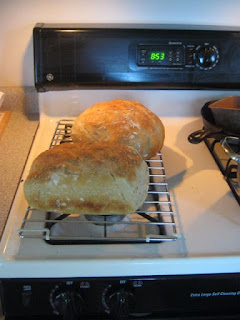 But there has also been a lot of squabbling, whining, crying, screaming, shrieking, running in and out of the doors, and general unpleasantness when I would have given ANYTHING for half an hour of Curious George.

The satellite internet was installed yesterday. I've never had satellite internet before, so I'm kind of paranoid about using up all the data, but I went ahead today and put on a YouTube video (on the lowest resolution to use the least amount of data, because like they care if the picture is kind of fuzzy) of Rescue Rangers. And it was GLORIOUS. Twenty-five minutes when I didn't have to talk to them once.

Alleluia, all hail the power of the screen.

Labels: all about me, Charlie, Cubby, the great white north

In Which It Gets Real

After  an unnecessarily long trip back to the new house in the north woods on Saturday (it is road construction season, after all), we arrived home just in time to set up the kids' beds and have dinner before there was a knock on our door. It was our nearest neighbor.

Hooray for the Welcome Wagon!

Except instead of a plate of cookies or the take-out menus for nearby restaurants*, she came bearing her phone, on which she showed us a picture of the bear that was in her backyard the day before.

Oh. Welcome to the north woods.

She lives only about a quarter mile down the road, and the photo was taken by their motion-activated wildlife camera at 12:10 in the afternoon the day before. It was a really big black bear, presumably there to eat the berries. She said she knew we had small children and she wanted to make sure we knew about the bear so we could be careful with them. And maybe keep the dog inside.

Righty-o. Guess I shouldn't be letting the kids out by themselves to pick berries, then.

We haven't seen any sign of the bear since then, so we can only hope it's moved on.

I'm mostly unpacked; I've been to the grocery store and the village library twice already; and I am preparing to go to the cheese factory store right now to stock up on all my dairy needs, so we're settling in nicely. Assuming the (flaky) dude actually shows up to install our internet tomorrow, I may actually be able to use a computer at my house instead of driving ten miles to the library.

If you don't hear from me tomorrow, the guy either didn't show up, or I got eaten by a bear. Anything's possible here on the frontier.

* "Nearby restaurants." HAHAHAHAHAAAAA. There are none.
Posted by Kristin @ Going Country at 8:16 AM 5 comments: