Long version: My parents arrived for a two-day visit this day, so I guess this is what I consider company food now. Or maybe I'll just say all company is family when they come to our house, so they eat what we usually eat. Or whatever.

I made the meatballs earlier in the day, along with some of Finny's tomato sauce and some extra marinara sauce for the meatballs. Since I didn't make pasta and the meatballs had enough sauce, I didn't end up needing Finny's sauce.

The squash was a particularly good one from the garden. You know we saved the seeds.

Long version: I punked out on making tortillas in the tortilla press my dad made me, so I just went with the meat by itself, fried in the rendered lard with salt, paprika, and garlic powder. Way better than it should be. Must be the lard.

Long version: Since my parents were leaving right around noon, we had an early big Sunday dinner in the old-fashioned sense of the word: a roast chicken and onions, baked carrots, pasta with Finny's sauce, cucumbers with ranch dressing.

That's why we essentially had our lunch for dinner, i.e., tuna salad sandwiches.

And now, since I no longer have my phone handy and therefore don't have any current photos, here's an old one of Poppy double-spooning some buckwheat cereal: 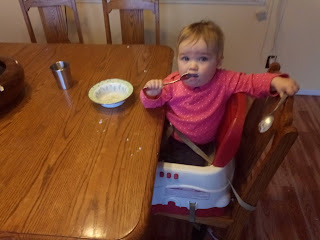 My, what round cheeks you have.

Long version: These "ribs" are cut more or less from pork shoulder, which means they do well cooked slowly until tender. So that's what I did in the morning. Then at dinnertime, I just stuck them under the broiler with barbecue sauce.

The tomato salad had asadero cheese in it, which always makes it better. It also had fresh basil in it. I thought the basil was dead after our cold spell, but it turned out it was just very dehydrated. After a flooding, it perked right up and I have fresh basil again. Yay!

Short version: Leftover pork and rice for the adults, chicken patties and leftover mashed potatoes with cheese for the children, cucumbers with ranch dressing

Long version: Another work day, another opportunity to clear out the refrigerator.

Long version: Charlie's teacher is moving at the end of the semester, and until then, she is solo parenting her three kids while teaching, coaching volleyball, and living in a mostly-packed-up house. My immediate response to such a stressful situation is to feed the person. So the four of them came for dinner.

One nice thing about not having easy access to a grocery store is that there's never really any question about what I might serve guests, because I can only cook what I have already. The only meat I had in enough quantity for ten people was chicken. I was out of bread and potatoes, which left me with either pasta or rice for a starch. My vegetable choices were frozen peas, tomatoes, or carrots.

Makes it easy to plan a menu.

It was far from fancy, but it was tasty, everyone ate it and took seconds, and that poor, exhausted woman did not have to get home at 6:30 p.m. after working all day and be faced with cooking and cleaning up dinner.

The cookies I actually baked for school the next day. This is the only five-day week we have all year, because it's the week that the traveling Missoula theater people come to rehearse and perform a play with the kids. Obviously, that is not happening this year, but we still have to have the Friday school day because it's built into our required number of days in the school year.

Charlie's teacher (the same one who came for dinner) decided to have her class do a very short and simple play of "The Three Pigs" for the other two elementary classes. And I decided that since there was to be a play, however simple, there must be a treat. The Missoula play always involves cookies and punch after the play, so I figured I could at least provide the cookies.

Poppy and I made oatmeal chocolate chip cookies, and I forgot to add the salt.

I remembered I hadn't added it after I took the first batch out of the oven, so I just sprinkled the hot cookies with a bit of salt, and then sprinkled salt over the rest of the cookies after they were in the oven and had spread out, but hadn't set yet. They came out very well, actually. I let our guests preview them for me before I brought them to school. No complaints.

* Well, to be precise, I always use salted butter, so there was a minor amount of salt, but definitely not enough.

It's a Going Country Book Club!

Okay, not really. Unless any of you are currently reading the same book I am reading. But it's possible! And it's more possible than it normally would be, because I am currently in the middle of three books.

This is very unusual for me. I don't like reading more than one book at a time; it makes me feel too scattered. However, I was given a book by a friend who was interested to hear my reaction to it. That book is The Winner Stands Alone, by Paulo Coelho. He also wrote The Alchemist, which I have not read.

I'm about a quarter of the way through, and so far, my reaction is that I don't love it. It's readable, but the first part of the book definitely reads to me as the author standing on his soapbox (thinly veiled as a fiction novel) and lecturing the reader about the Evils of the Modern World. However, I feel compelled to finish it so I can discuss it with her, and so I plow ahead.

Because I don't really love that book, I am not really too motivated to pick it up consistently. Which is why I'm also reading another book at home. That one is the sixth Anne of Green Gables book, Anne of Ingleside. I think the last time I read the entire series I was about eleven years old, so I don't really remember them. They are relaxing to read. Occasionally boring, but definitely soothing. And that is much appreciated at this particular crazy point in history.

And lastly, I borrowed a book from the library at school to read on my lunch break: A Prayer for Owen Meany, by John Irving. I remember this one being very popular several years back, and so far I'm enjoying it well enough to continue. I'm just getting to the Big Event of the book for the narrator--or rather, the first Big Event--so it's so far been all lead-up, but I'm more of a captive audience at work, so I'll read things I wouldn't necessarily choose to read at home.

Also, I tend to have more of a solid, uninterrupted block of time to read at work, so I can read things that require a bit more concentration. Forty-five minutes to read with no interruptions at home doesn't happen very often.

So tell me! What are you reading these days? Any recommendations?