Okay, who knows what all of these acronyms stand for?

So how'd you do? If you knew them all, then you are more qualified to answer questions from a three-year-old than I am. Or maybe you were like me: a little hazy on the full phrasing for some of those. ( "Scuba! I know this one! Submersible . . . c-something . . . underwater breathing apparatus? Maybe? Wait, lemme Google it.*") If that was you, allow me to save you some Googling.

Answers after a totally unrelated photo of Charlie wrecking the joint: 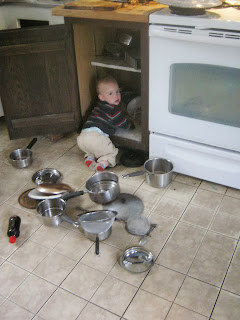 1) AM and PM=ante meridiem and post meridiem. I thought it was meridian, but that's just the line of longitude on a globe. Meridiem is a Latin word for midday. Good to know.

2) B.C.E. and C.E.=Before Common Era and Common Era. I did know this one, although this is the more recent way of referring to years and I still sometimes expect to see the old B.C. and A.D. I learned as a kid. Because I am ancient, apparently.

4) Scuba=Self-contained underwater breathing apparatus. I got three of the five words there. Is that a passing grade?

Thank God for the Internet. It allows me to appear a lot smarter to my preschooler than I apparently am.

* Or if A. is handy, just ask him, since he knows the answer to everything. This is simultaneously helpful and very irritating.
Posted by Kristin @ Going Country at 8:02 AM 7 comments:

Labels: all about me, confessions, country wisdom, Cubby

Anyone else remember those "No Fear" t-shirts that were so popular in the nineties? I had one for soccer. The slogan on it was supposed to convey how bad-ass and balls-out that activity was.

Kind of lame now that I think of it, but I could use one for cleaning.

The mildew smell was not eliminated by my efforts with the fireplace. Reduced, but not eliminated. Since even a hint of mildew is way too much, I decided a full-on assault was the only answer. This meant scrubbing down every wood surface in the dining room.

So the three feet of wainscoting that runs around the entire room, especially behind enormous pieces of furniture that are never moved? Yup, mildew everywhere. Wood floors? Mildew in the corners. Every curve and embellishment on our ornate Chippendale-style chairs? Yuh huh. Mildew. Door frames, window frames, tables, EVERYTHING in this damn room is wood and therefore susceptible to mildewing.

I did some of it last week. I got about half of the rest done in the hour and a half I had during Charlie's nap today. I'll probably be mostly crippled for the rest of the day. All you people who like to get all fit at the gym? Come scrub my house instead. The hours of repetitive motion and awkward bending are just as challenging to the body, and they can't be any more boring than a treadmill.

Only a little bit left to do in the dining room, and then I get to start on the bedroom attached to the dining room, which is so damp it might as well be a cave. And then there's the library. And the living room. And . . .

You know what? Just send me a case of Murphy's Oil Soap and a back brace, okay? I'm gonna need 'em.
Posted by Kristin @ Going Country at 11:05 AM 3 comments:

Labels: all about me, Blackrock

The Future Is Now

We used to get the Lehman's catalog. It's the ultimate in wishful catalog shopping for people that live our kind of lifestyle.

One of the things I always used to see in the catalog was this extra-extra-large cast iron skillet.  I always thought to myself, "Who in the world needs a skillet that can fit a dozen eggs?"

When I fry eggs for my family, I have to cook nine--two for me, two for Cubby, two for Charlie, and three for A. And that's not even with any for the MiL, who usually isn't home when we eat. A. would probably prefer four for himself, but even nine eggs don't really fit in my biggest skillet. I could use that XXL skillet I used to scoff at.

It won't be long before Cubby and Charlie will be eating as much as A., and at some point they'll be eating more than him. Of course, at that point they can also cook their own damn eggs, so I won't be trying to cook, like, two dozen eggs at a time myself.

I'm going to have to start making bacon in the oven, because I just can't fit all the pieces we eat in one pan on the stovetop.

I made custard the other day, a recipe which requires a two-quart baking dish for cooking, and I got about half a serving after A., Cubby, and Charlie had all had a go at it.

A. made omelets for dinner a couple of nights ago. He used a dozen eggs total, plus cheese and ham, to feed the four of us. Each of the children ate as much as I did. If not more.

I made an enormous apple crisp in a 13x9 pan a few weeks ago--the one that the cookbook calls "Apple Crisp for a Crowd"-- that was gone within two days.

I used to joke when Charlie was a wee baby and Cubby still a toddler and not really the honest-to-God little boy he most certainly is now that in the future I would have a hard time keeping up with the demand for food.

The future is now. Start your stoves, folks--the feeding frenzy is on.
Posted by Kristin @ Going Country at 9:26 AM 8 comments: