And What Have We Here?

I just love these mystery posts where I pick out a random, mysterious old photo from my unorganized archives and throw it up here to take the place of actual thought and effort.

So! What will we cull from the past (specifically, from June of '09) today? 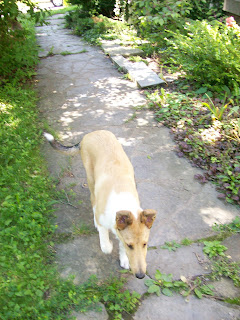 Awwww.
It's Rita the No Longer Homeless Puppy! And speaking of Rita, I don't think I told you that she got kicked out of the doggy daycare her doting new owners enrolled her in so she wouldn't be lonely while they were working. Apparently, she was too aggressive with one of the other dogs. It's hard being a rough and tumble country dog in the midst of a bunch of timid city dogs. Those people that run that daycare should come and observe the group dynamics of our little wolf pack here, and then they'd see what aggressive REALLY is. You don't get scars like Mia's by being polite. Polite dogs don't tree raccoons and kill woodchucks. We prefer our dogs to be a little aggressive--they're more useful that way.

Okay, that's about all I got today. Have a fantastic Saturday, poppets. Until tomorrow . . .
Posted by Kristin @ Going Country at 6:16 AM 4 comments:

Childbirth class number five last night, but no gory birth video I had to ignore OR irritating mandated breathing that I had to pretend to do. YAY! I guess maybe now they figure we can be trusted to breathe on our own.

Instead, we got to play with some creepy-looking baby dolls, putting on diapers and learning how to swaddle. While I was taking my turn dressing the dead-eyed plastic child on the table, I asked the nurse about temperature while the baby is sleeping. As in, does it really need to be all that warm in the room? She, having no idea where this was leading, told me that if it's comfortable for me, then it's comfortable for the baby. Whereupon I had to break it to her that my bedroom is 45 degrees, and that IS comfortable for me, but I don't think a newborn is going to really enjoy that so much. Since I'm not allowed to put him under flannel sheets, two wool blankets, and a down comforter. That might just be a slight risk of suffocation there.

Then she said that most people's bedrooms are around 60-65 degrees, and that's about right for a baby. And some people in the class chimed in to say their bedrooms are more like 70-75 degrees. I was amazed that anyone would choose to sleep in a room that warm. That would be a risk of suffocation for me.

So let's take a poll: What temperature is your bedroom while you're sleeping?
Posted by Kristin @ Going Country at 5:44 AM 37 comments:

The antenna on my old and crappy car is broken, and has been for some time. This means that I get exactly four radio stations in my car: classic rock (heavy on the Led Zeppelin), light rock (heavy on the Eagles), and two country stations. Luckily, I like country music. But it's not really dancing music, you know? I love to dance. Although, I should probably make that "loved," past tense, as my gravidity has made it somewhat difficult to dance* in any energetic fashion. Thanks, man-cub!

But there is one form of dancing that even I can still do, as I discovered when I was driving along listening to the light rock station and they took a break from the Eagles to play a song that IMMEDIATELY made me start bouncing around in my seat.

I realize that probably most of you have heard this song about four million times on the radio already, but it was new to me. And I immediately loved it. It's such a happy, joyous song. And it made me dance in the car.

So if by some chance you haven't heard it yet, or even if you have and want to hear it again, click on that link to YouTube and be prepared to bounce.

* Right there I was going to use some kind of cool slang phrase for dancing, but then I realized how cringe-inducingly LAME they all are. Consider: Get your groove on; gettin' down; rockin' out. Or even, if we really want to date ourselves: gettin' jiggy with it. GOD NO.
Posted by Kristin @ Going Country at 6:20 AM 11 comments:

I don't really have anything particularly entertaining to say today, so . . . look! Over there! It's bunny booties! 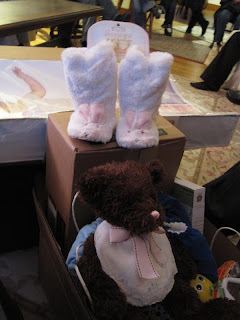 These were a shower gift from the MiL's cousin, and they're so soft I want to just curl up inside of them and take a nap. They may tie with the bear suit for Most Adorable Item of Clothing on the Planet.

Below the booties is a teddy bear with a bib around its neck. This was courtesy of the MiL's sister, who may have forgotten what day the shower was on and so didn't actually have time to go shopping and instead grabbed one of her own teddy bears and put on it this bib she had found at her mother's house. It's a hand-sewn, hand-embroidered bib that was used for at least one of the MiL's siblings, and probably more of them. It's, like, a family heirloom. And as such, is way better than anything she could have bought at Target.

Also as such, is not something I will be actually USING for man-cub, since I think a bib made by his great-grandmother has more sentimental value than drool-catching value. Especially since the bib is this really, really thin material that I do not think would be very helpful in catching drool.

But those booties? Oh yes, they will be used. And there will be photos. Between the bunny booties and the bear suit, I think we'll have more than enough embarrassing ammunition for the teen years, don't you?
Posted by Kristin @ Going Country at 5:43 AM 9 comments:

Last night, after a filling but nonetheless not entirely satisfying meal*, I wanted something for dessert. But there really wasn't anything dessertish (look! a new word!) around. Oh, there were canned peaches and pears, but I don't consider fruit a real dessert. Because I am not cosmopolitan (or healthy) enough for that. Sometimes I'll have A. make cocoa and that will be my dessert, since he makes it with whole milk and a LOT of cocoa powder so it's pretty rich. But I didn't want that, either. So I went with my fall-back, there's-nothing-for-dessert dessert: A spoonful of peanut butter with chocolate chips smushed into the top.

It ain't pretty, but it does satisfy the desire.

Please tell me I'm not the only one out there with such a craze for dessert that I will resort to this sort of thing. Some of you MUST have desperation desserts of your own, right? RIGHT?

* A weirdly tasty concoction from my Spain cookbook of basically cornmeal mush with ham, bacon, garlic, paprika, and caraway, of all things. Best of all, though, was the note that it's often "garnished" with fried pork loin or chorizo. Because it's always good to squeeze in yet ANOTHER form of pork. This is one reason we really loved our trip to Spain.
Posted by Kristin @ Going Country at 6:20 AM 16 comments:

Labels: all about me, confessions, fun with food

Today is the first of February. By the end of this very month, I will almost certainly have a baby in my arms instead of in my torso.

I think I just blew my own mind.
Posted by Kristin @ Going Country at 5:56 AM 18 comments:

Labels: all about me, baby stuff, randomness

The Beasts of Blackrock

First things first: The lake did not freeze. It was about two degrees all night, but there was just enough of a breeze to ripple the water and keep it from freezing. Bummer. Foiled again.

And on a related note, allow me to share with you a conversation A. and I had as we were getting ready for bed last night. A. had just checked the weather station in the back bedroom and discovered it was five degrees outside.

Me: Is it cold in the back bedroom?

Me: Oh, that's not too bad. It feels pretty warm in here (our bedroom).

I checked the thermometer on A.'s nightstand. Then . . .

A.: And that feels warm to us.