I may have mentioned a time or two this summer how sad the garden has been.  Sad for me, that is.  Those goddamn rabbits seem to have been pretty happy in there.  But me?  Not so happy.

I haven't even posted any photos.  If I had, what you would have seen was almost the entire garden space (and that is a REALLY BIG space) covered in weeds literally as high as my head.  Sometimes higher.  Plus that evil ground cover weed with the little white flowers that just takes over.  Really.  It was a garden of gigantic weeds.  It was awful.

After some good rain a couple of weeks ago, I started the long process of reclaiming the garden by yanking out the tall weeds.  Mostly pigweed, with . . . some others I can't identify.  I pulled them out by the roots, sometimes digging them up with a shovel if they were really enormous and too big to yank up by hand.  I spent HOURS pulling weeds, cramping my hands and crippling my already-taxed back.  They were so big and numerous that I just pulled them and threw them into a pile, figuring I would dispose of them later.

Then A. tilled where the potatoes had been and I raked the weeds left behind into yet more piles.

The piles grew and grew and I started to wonder how the hell I was going to get all those weeds into the gully.  Many of them had already set seeds before I pulled them, so there was basically a huge pile of weed seeds in the middle of the garden.  I didn't want to pick them up and have all those dried seeds get scattered all over.

And then I had my inspiration: fire.

Yes.  Cleansing, purifying flames.  Burn those bastards to the ground.  So yesterday afternoon, A. lit the piles of weeds on fire.  It was a beautiful sight.  Let the smoke take away the failures of 2012 and leave us with a brand new garden for next year.

There's lots left to do, more weeds to pull and burn, tilling to be done, cover crops to be sown.  But we've started the process and that makes me feel much, MUCH better.
Posted by Kristin @ Going Country at 6:04 PM 7 comments:

Labels: all about me, country livin', fun with food, gardens, manual labor

Despite the general suckage of the garden this year, it is still time to start harvesting things.  Things like tomatoes, potatoes, and two random volunteer butternut squashes, which Cubby and I gathered up this morning.

Also things like the Seckel pears from the tree in the paddock.  But first, A. had to get rid of the possum the dogs killed last night that was lying next to the pear tree.

No, that is not a joke.  And yes, it did freak me out, because you know how possums will play, uh, possum?  I'm always convinced they're not really dead, but rather pretending so I can get close enough so they can leap up and attach themselves to my face.

After A. disposed of the definitely-dead possum, the whole happy family commenced pear harvesting. 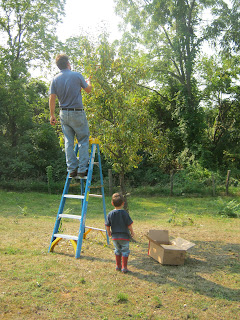 Okay, so A. actually did most of it.  But the rest of us were there for moral support.

Cubby, while enthused by the idea, was not really so much a help with the actual harvesting, due to his insistence that he eat all the pears.  Even though I kept telling him they were too hard (pears actually finish ripening off the tree), he kept pulling pears out, gnawing on them for a couple of minutes, then tossing them away because--SURPRISE!--they were too hard. 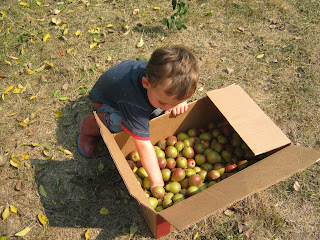 Luckily, there were still plenty of pears left despite this annoying habit.

Oh, and there was a ladybug. 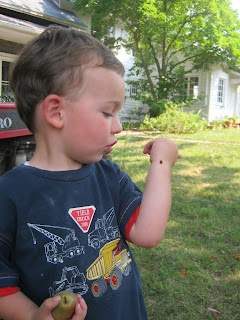 Charlie was also not much help, since he was busy doing . . . well, what Charlie does. 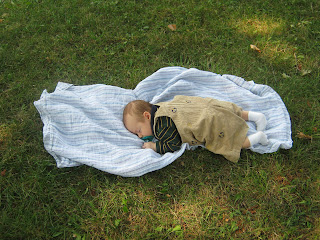 When the pears are actually soft in a couple of weeks, I'll probably end up making them into pear sauce and freezing it.  And giving them to Cubby to eat, of course.  But only WHEN THEY'RE SOFT, CHILD.

The Best Hostess Gift Ever

You will forgive my silence here, I am sure, when I tell you that my sister and her family arrived on Sunday for a brief visit that ended today. My sister is a frequent visitor to Blackrock--although, considering her activities during previous visits, I really can't imagine why--but her husband and daughter have never had the dubious pleasure of a visit to our lakeside estate*.

They made themselves immediately popular, however, by showing up with a cooler of food.  Specifically, three pounds of carne asada, a dozen green corn tamales, and salsa from their favorite Mexican restaurant.  Well then!  Come on in!  And come back anytime!

In return, I sent them home with three quarts of pears (for my sister), a quart of pickled jalapenos (for my brother-in-law), a pint of strawberry-rhubarb jam (for my niece), and about a quart of pesto (for all three of them and fifty of their closest friends), the last of which they helped me make.

I'm not sure it was a fair trade on my end, but all parties seemed pleased with the arrangement.

* The only labor I required of them was harvesting tomatoes and stripping basil branches for me.  So maybe they'll actually come back.  My niece also spent much of her time playing with Cubby, which was just about the best thing ever.  He already misses his fun cousin.  Adults are so boring.
Posted by Kristin @ Going Country at 6:22 PM 1 comment: