All the Elements for Fun

I had to cancel Jack's admittedly lame birthday celebration with other children yesterday due to the fact that the birthday boy is currently dripping grossness from his nose, coughing like a three-pack-a-day smoker, and generally in no shape for revelry.

But that doesn't mean we didn't celebrate! Of course not! 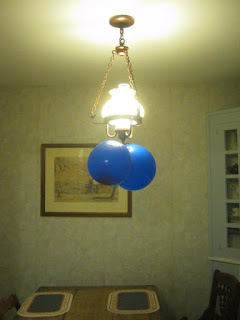 I am not on Pinterest. You are shocked by this, I know. 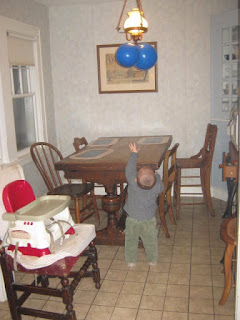 What kind of mean person hangs the balloons out of the guest of honor's reach? 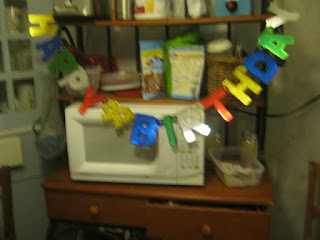 Now you see why I'm not on Pinterest? Yup. 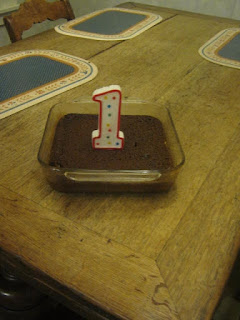 No, there is no frosting. I made whipped cream for it instead. (That's the same candle I used for both Cubby's and Charlie's first birthdays. Even Jack's cake decorations are hand-me-downs.) 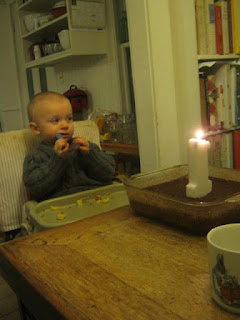 You might think this is the face of a child who is underwhelmed by his frosting-less cake. You would be right. 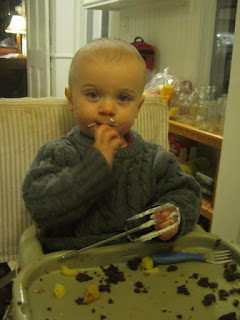 This, however, is the face of a child who is digging the whipped-cream-covered beater. 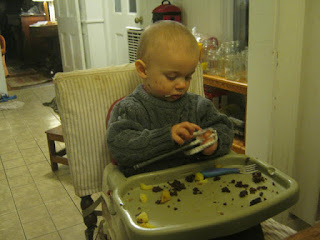 Maybe next year I'll skip the cake and just give him a beater.

We had a seriously exhausted and snotty baby who was ready for bed at 6 p.m. 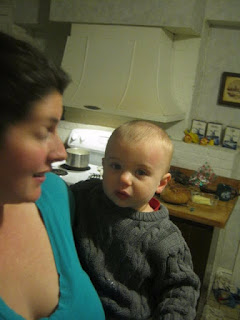 Party on, Wayne. Some other time.

We'll make up for it next year. Maybe. 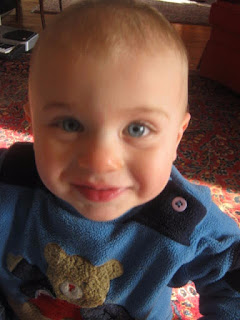 Happy first birthday to the incredible Jack. Long may you prosper.

Oh, hey. I feel like shit today. Yesterday, too. The expected holiday pestilence has landed on me and Jack this time, and the days have been a challenge to get through.

It's pissing down cold rain outside and my house is totally filthy and not at all presentable for the pseudo-birthday party I'm supposed to be hosting tomorrow for nine small children and two other adults.

But. And this is the big, happy, deeply grateful "but".

Cubby and Charlie are at school. And Jack is asleep. So I can sit by the woodstove in peace, blowing my nose and ignoring the clearly visible dust on every surface.

Today more than most days, I definitely believe in the value of education.
Posted by Kristin @ Going Country at 7:35 AM 1 comment:

Labels: all about me, Charlie, Cubby, Jack, school

The Lighting of the Tree: A Comedy in Two Acts

We got our Christmas tree on Sunday at the woodchuck tree farm. And then I had to put the lights on.

Nonetheless, there can be no Christmas tree without lights. So during Jack's morning nap, I began.

Charlie was in there with me, contributing to the efficiency of the whole project by getting under my feet and tripping me up as I wound my way around the tree.

I plugged each strand in before I put it on the tree to make sure it worked. All went well with the top of the tree, but then two strands in, I remembered that we have two strands with smaller bulbs and two strands with bigger bulbs. And I had put the two with the smaller bulbs at the top of the tree. It would have been better to alternate the sizes, so it wasn't tiny bulbs on top and bigger bulbs on bottom, but too late for that. Onward.

After about fifteen prickly, sticky minutes, I had four strands of lights on the tree. I ended on the side opposite the electric outlet, so I had to pull the power strip and its cord across the front of the tree to plug the lights in, but eh. Good enough.

So I turned them on for the big finish and . . . one of the strands was only half working. Actually, it was about a third working. The bulbs on either end of it were working, but a section in the middle wasn't. And of course--OF COURSE--that section was smack in the middle front of the tree.

I got out some extra bulbs and tried replacing some of the malfunctioning ones. The bottom half of the strand started inexplicably blinking, but the unlit ones stayed unlit.

"I don't like the blinking ones, Mommy," said Charlie.

Me neither, Charlie. Migraine-inducing, for sure.

So I pulled the whole strand off, thinking I would replace it with a random strand of all-white lights we had in the box. Except that the all-white strand only had a plug to plug in on one side; it didn't have the receiver plug thing on the other to hook it with the rest of the lights. Ooookay.

So then I thought I could just plug it in by itself in the power strip and kind of zig-zag it across the front of the tree to fill in some of the empty spots and blend in with the multi-colored lights.

This all sounds much more calm and reasonable than I was feeling at the time, by the way. My internal monologue was much more profane and stressed out. Especially when I got halfway through putting the white strand on the tree and it suddenly stopped working.

I pulled off the white ones, pulled the already-draped strands of multi-colored lights around until they mostly covered the tree, and gave up.

But I was not entirely defeated yet! No!

At around 4 p.m., it was pretty dark so I told Charlie we could turn the Christmas tree lights on. Jack was with us, so he came into the parlor too. I turned them on and then had the brilliant idea of using the partially-working strand to fill in a little, making sure that the non-working lights were in the back by the wall.

So I started re-stringing lights, this time with both Charlie and Jack crawling around my feet.

The whole strand stopped working. I replaced a random bulb and it was back to partially working. I kept on stringing it around and it miraculously ALL STARTED WORKING.

Perhaps our lights are possessed? I do not know. But they're on the tree. And when Cubby came home and saw the lit-up tree, he got all open-mouthed with wonder and said in a hushed voice, "Oh Mama. It's beautiful." 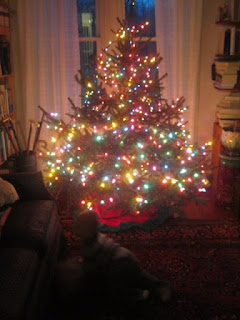 Yeah, it is. Wonky lights and all.
Posted by Kristin @ Going Country at 2:30 AM 1 comment:

Labels: all about me, Blackrock, Charlie, Cubby, family, Jack, randomness

Are your voices limbered up and ready for another rendition of "The Woodchuck Man Can" in honor of A.'s 35th birthday today?  Click for versions one, two, three, and four.

On with the singing!

Who can shoot a big buck way out in the woods?
Then make it into sausage when I said I never would?

Who can build a lean-to for winter camping fun?
Who can coach a little boy in his very first fun run?

Who can take two small boys camping overnight?
Who can shoot a mean raccoon after a damaging dog fight?

Happy birthday to A., the best Daddy Woodchuck that three small Woodchucks-in-Training could hope for.

Labels: family, the A team

The past six years or so of erratic sleep schedules have taught me one important thing: I should never voluntarily get up before 5 a.m.*

Perhaps this sounds like an obvious thing to you. Perhaps you do not have as many small children as I do.

See, what happens is, the current baby will awaken me at something like 4 a.m., right? So I go in to nurse him, and I get back to my bed at 4:15 a.m. But then I'm pretty awake, because that's close to my wake-up time, and my brain starts running, thinking about the things I have to do and how long until the older kids are awake and if I need to shower before they get up and on and on and on . . . and then it's 4:45 a.m.

At a time like that, I think, "Well, hell. I should just get up and get going. At least I'll have some time before other kids get up."

This is what I tell myself. Even if I can't get back to sleep, I should not physically haul myself out of bed. It inevitably results in exhaustion by about 5:30 a.m. Staying in bed, if not actually sleeping, until at least 5 a.m. is the right thing to do.

A. got up at 4:30 this morning to go check his traps before work. The warning bells in my head rang and I prepared to stay in bed, but then I was hearing this faint mechanical noise from the cellar and I started worrying it was the water pump not shutting off (which can happen if something like a toilet is continuously running water and that can burn the water pump right up if it continues running too long), so I got up to check. And stayed up.

* The only exception to this is if I've had a fully uninterrupted night of sleep and have actually slept straight through from 9 p.m. until 4:30 a.m. or something. But since this happens literally never lately, the rule always applies.
Posted by Kristin @ Going Country at 3:56 AM 2 comments: