Lettuce sprouting in the hotbed.

Tomatoes sprouting in the house.

Laundry on the line.

Children asleep at the same time.

I had a lot of things I wanted to say about this. Things like how my perspective has changed in those five years, from that of an outsider viewing the rural life to that of . . . well, a liver of the rural life. A proponent, even.

Things like how I've changed beyond all recognition. My own recognition, that is. I've become a gardener in those five years. Also a meat processor, a canner, a firewood stacker, an assistant shepherd, a maker of laundry detergent and hand soap, and too many other things to mention.

Most importantly, of course, I've become a mother. Twice.

My life is nothing like I could ever have envisioned it, even in any of my most startling flights of imagination (which can be very startling, frankly). It's so much more. And it's all here, on this site.

Thanks for coming along for the ride. Let's carry on, shall we?
Posted by Kristin @ Going Country at 10:28 AM 9 comments:

I'm Looking at the Baby in the Mirror

I'm not asking him to change his ways, though. Except maybe his nighttime waking ways. That can change immediately. But everything else? I love you just the way you are, Charlie*. 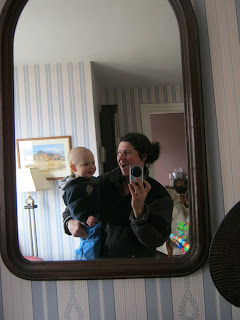 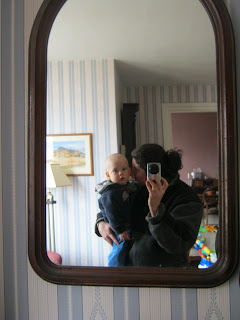 * It was not my intention at the outset to quote multiple easy-listening songs, but there you are.
Posted by Kristin @ Going Country at 5:41 PM 1 comment:

When I corned and subsequently cooked the biggest brisket ever, I had to put it in our most capacious stockpot and then fill it with a LOT water to cover the meat. This resulted in about two gallons of broth.

Now. I don't know about you, but in the past when I've cooked store-bought corned beef, I've just thrown away the salty, nitrate-laden cooking water. It's too salty even for the dogs. But with the home-brined beef, the water it was cooked in wasn't too salty. It was . . . tasty.

The MiL used half the broth to make a potato, onion, and beef soup. I used the other half to make an Asian beef and noodle soup. These two soups not only used up the broth, but also put a small dent in our enormous supply of beef soup bones.

The thing about buying beef a half or whole cow at a time is that you end up with a lot of random, time-consuming pieces. Like shank soup bones. They have quite a bit of meat on them, but they also have quite a bit of bone. Obviously. And they have to be cooked a long time to make the meat tender and easily released from the accompanying fat and cartilage.

And then, of course, I have to strip the meat. You know how much I love that.

The other seemingly inexhaustible cow product that we end up with far too much of is suet. We hang some outside for birds in the winter. I make some into tallow for cooking. We still have far, FAR too much suet.

We won't even speak of the quantities of liver. It's alarming.

The reason I've been dealing with soup bones and suet (and studiously ignoring the liver) lately is that I inventoried and reorganized our two big chest freezers yesterday. I found we don't have much beef left, except the soup bones and a ton of ribs. Plus, of course, the never ending boxes of suet and liver.

I also found a lake trout and a salmon that I thawed and presented to A. for filleting and eventual smoking. Fish that have been frozen never taste very good to me upon thawing and cooking, so I figured smoking would be the best way to use them up.

Oh! AND I found half a gallon of sweet cider that was hiding at the bottom of one of the freezers, which made Cubby happy. He does love cider.

I just never know what prizes might be found as a result of freezer organization. But I can always count on finding suet. And liver. Gross.
Posted by Kristin @ Going Country at 6:02 PM 5 comments: