I feel this particular revulsion regarding lamprey eels. I mean, EVERYONE feels revulsion at the sight of a lamprey eel--at least, anyone who has ever seen an image of their gaping, teeth-ringed sucking maw*--but I just can't seem to get away from the disgusting sumbitches.

First there was the original pickled lamprey in a canning jar--a particularly gross memento of A.'s childhood--that hangs out in the crawlspace in the back bedroom. At least that's out of sight.

Then there was the live lamprey that appeared on our beach and then in my living room before being pickled in its turn and put in place of pride on Cubby's dresser. That one is still there, sloshing around most disturbingly every time I open the drawer to get out a pair of socks for him.

And then there were the multitudes of live lampreys that Cubby got to play with yesterday.

Mr. Jason has been working this spring trapping lampreys for the state conservation department, for various purposes including studying and decreasing their numbers. Of course when A. found out about this, he just had to bring Cubby to see the traps.

I had zero interest in going, both because I'm so repelled by lampreys and because I really didn't want to deal with Charlie around a mess of sucking nightmare creatures. So I let A. take Cubby by himself. This meant that Cubby actually got to handle the lampreys (while wearing gloves). The photos were enough to make me shudder; I can't imagine actually being there and watching him hold one of these writhing monsters. 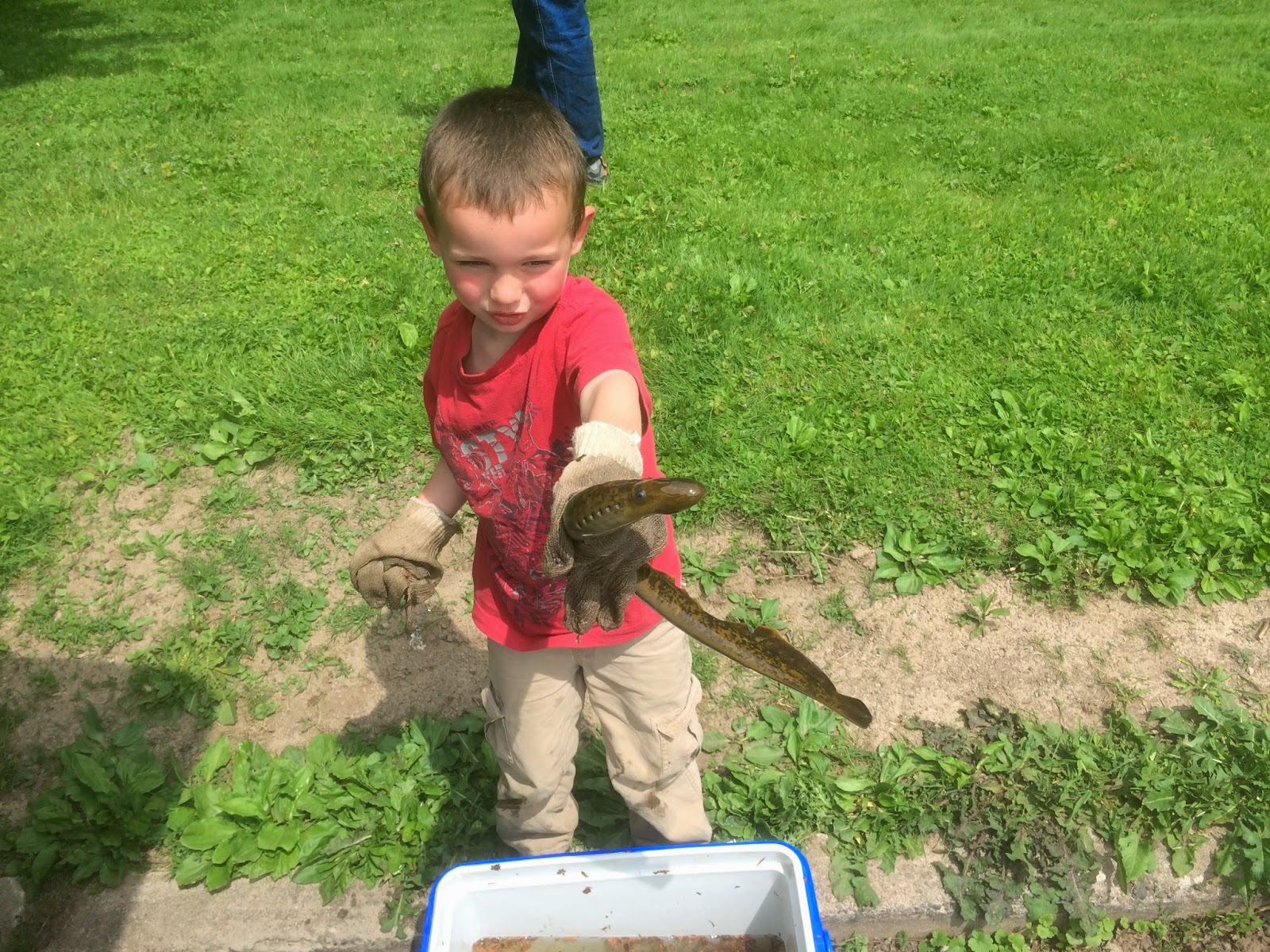 There was a video too, but it made me too faint and I can't bear to post it.

Cubby, however, had a wonderful time and has told anyone who will listen how he got to hold a lamprey eel.

And then I have to explain to a largely incredulous audience why he was holding them. Though really I have no real reason. Why anyone would voluntarily hold one of those things is so far beyond my comprehension that I'm just giving up on understanding my son right now and turning him over to his father for the really fun stuff.

At least they didn't bring any home and ask me to cook them. That probably would've finished me off for good.

* Which now includes everyone who just clicked on that link. You're welcome!
Posted by Kristin @ Going Country at 6:16 PM 7 comments:

Labels: all about me, confessions, Cubby, friends, wildlife

This morning at 4:45, Charlie woke up and started piteously repeating "Down, down, down," which I ignored, obviously, because, uh, because it was 4:45 IN THE MORNING YOU CRAZY CHILD, GO BACK TO SLEEP.

Instead, after thirty seconds of "down"ing, he decided to "down" on his own.

Yup, I got another jumper.

Although both my children seem to be the take-charge types when it comes to leaving the crib behind, I have a terrible feeling that Charlie is going to be a hell of a lot harder to keep in a non-cage bed. He's never been as good of a sleeper as Cubby was. He will never lie down with me to sleep, which it appears is how I first got Cubby used to sleeping in his own regular bed.

Charlie is also a few months younger than Cubby was when he got to this point, and a few months makes a LOT of difference at this age in terms of cognition and reasoning. In that there really is no reasoning with Charlie yet. Or rather, I can attempt to reason with him in the form of consequences, but he'll just listen carefully and then do what he wants anyway. Usually while grinning in a distinctly naughty way*.

Maybe he'll surprise me. Maybe he'll take to the bed with no trouble and start sleeping past 5:30 a.m. for a change. But I wouldn't bet on it.

* Example from yesterday: "If you throw one more stick at Mia, who is trying to sleep peacefully in the sun, we will go inside. Do you understand?" "Ah," says Charlie in agreement. Then comes the naughty smile and there goes the stick at Mia (who doesn't even move, because she is the best dog ever). And then we go inside amid much screaming and outrage. Why hello, Terrible Twos! You're early!
Posted by Kristin @ Going Country at 3:56 AM 6 comments: