Friday Food: Where the Antelope Roam


This has been quite a week. A saddening, frightening, and confusing week for everyone who has followed the news. Food seems to be a silly thing to be talking about when there are so many other conversations to be had that are so much more important, but still, we eat.

Long version: Thanks to a neighbor, we unexpectedly find ourselves with quite a few pounds of antelope, which we have only eaten once. I'm always a little wary of game meat until I taste it, because it varies so much based on the animal and the conditions in which it died and was processed.

When it doubt, though, marinade is my friend.

So I marinated a couple of small roasts in yogurt, lemon juice, salt, and garlic powder, then seared them, sliced them, and returned them to the pan to finish cooking.

Verdict: Very good. Not gamy. Jack, who is not generally a meat-eater, even had three servings. Hooray for palatable meat!

Long version: This was the backstrap, which I didn't marinate because I was now confident it wouldn't taste gamy. Instead I just seared the two pieces of backstrap, then sliced them and added them back to the pan with some garlic scape pesto to finish cooking.

Long version: Due to a confluence of milk sources, I found myself with seven and a half gallons of milk in the refrigerator on Thursday. It seemed advisable to use six cups of it for pudding.

I have never made butterscotch pudding, but I was kind of low on cocoa powder, so I thought I'd try it instead of the chocolate I would normally make. Every time I make pudding, I am surprised at how long it takes to make pudding. The heating of the milk really can't be hurried, lest it scorch, so it's kind of like making risotto or a roux: Long periods of contemplative stirring.

Or, in my case, impatient stirring, because it takes even longer to heat up the milk for the double batches I'm always making. Like more than half an hour.

I used this recipe and it was very good, except only A. and Cubby really liked it. Boo. Guess I'd better get more cocoa powder, because there is no point in spending all that time making pudding only half the family will eat. I need to make sure to cook the pesto a little more when I'm using it for a pasta sauce, though, because just putting it straight on the hot pasta doesn't tame the spiciness of the raw garlic scapes enough for the smaller children. Microwaving it for a few seconds is enough.

I was reading something about garlic scapes just the other day, and the author claimed they had a "mellow sweetness." I had to wonder what kind of garlic he had, because ours have no mellowness at all. Sweetness, either. You try eating one of our scapes raw and it will punch you in the mouth with the garlic burn. But after a few seconds of cooking, no problem.

Long version: One nice thing about having a continuous stream of toddlers in the house for the past decade is that we can continue with the broccoli tree game. "It's a broccoli tree!" They take a bite. "The tree is losing its leaves! It must be fall!" Another bite. "More leaves gone! Winter is coming!" And so on until the tree is felled and used for firewood.

The fun we have at the dinner table is just never-ending.

Long version: I can't decide if these should be called Italian sliders or flattened meatballs, but I think the former sounds more appetizing. It's just ground beef seasoned like meatballs, but without the bread crumbs and egg, and then cooked as very small hamburgers before being covered in marinara sauce and melted asadero cheese (our--much cheaper--substitute for mozzarella).

Whatever you call them, they're very good, and much less time-consuming than meatballs.

It was 81 degrees in my kitchen when we sat down to eat. That does not make me happy.

Okay, your turn! What'd you eat this week? And more importantly, how are you feeling these days?


Did you know knock-knock jokes are a two-year-old's joke of choice? At least, they're Poppy's. She can even tell one all on her own.

Here is her favorite joke, just in case you need to entertain a two-year-old in your life:

Okay, so it's funnier when she tells it and then laughs hysterically at her own wit. Twelve times in a row.

The repetition can get a little tedious, but I'll take all the laughter I can get these days.

What I Hold On To

There are many things I could say. Many thoughts I have, and far too many emotions to go into here.

So instead, I focus on the things I can hold close to me.

The potatoes that we planted over two months ago are coming up. Finally. They need lots of water, as does everything else, because it's going to be almost a hundred degrees every day this week. But I'm grateful to have so many things to water, because that means food for my family is right here, in my soil.

I have three tiny tomatoes on one of the plants. The day of the First Tomato draws nigh, and there will be much rejoicing.

There are more eggs in the incubator, so I hope to have another round of chicks hatching in a few weeks. The chicks that hatched out several weeks ago are outside and growing well.

And of course, there are these goobers. I hold them closest of all. 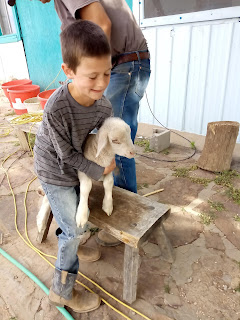 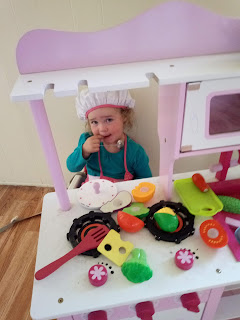 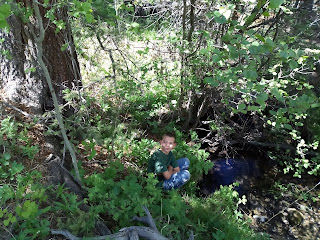 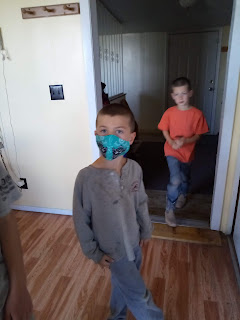 I hope you have something grounding to hold on to, too. Be well.