Hey, At Least It's Friday!

Isn't it just the greatest relief to get to the end of a really shitty week at work and have two whole days of not going to that shitty job?

Yeah.  That's the downfall of this parenting gig.

I have had a shitty week.  It is mostly due, I am afraid, to my adorable, incredibly intelligent, and most definitely headstrong firstborn.  I have never heard such screaming as has assaulted my ears this week.  Wordless, high-pitched, full-volume screaming, that goes on for minutes at a time and is triggered by something as heinous as my announcement that it's time for dinner.

It's bad, y'all.  I know why he's doing it (a need for attention, an inability to communicate frustrations and fears brought on by a new baby, etc., etc.) and I know why it's mostly aimed at me, but that doesn't really make it easier to endure.  A. and the MiL are trying to give me a break when they can, but there's only so much they can do, because what Cubby really needs is me and the assurance that I will still always be here and still love him.  Taking him away from me doesn't really accomplish that (although it does give my eardrums a rest).

Unlike a regular job, there are no weekends and no vacations.  There will be no break.  At least, not until Cubby grants me one by returning to his previous charming self.  That will happen, I know, and in the grand scheme of things it will happen in a relatively short amount of time.  It'll just feel like forever.
Posted by Kristin @ Going Country at 5:57 PM 6 comments:

It's common knowledge that you should never marry a person expecting him or her to change.  Case in point:  Nine years ago today, I married a man who spent the night before our wedding carp fishing on our beach.  And guess what he did yesterday? 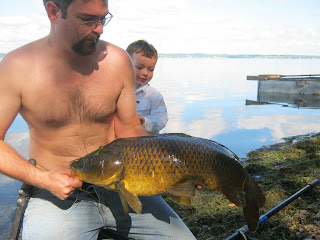 Some things never change.  Except for that boy in the background.  That's a pretty big change from nine years ago.

Yes, yesterday was a grand carp derby on our beach.  Cubby was very much involved.  Especially in the baiting.  He really enjoyed the baiting needle for threading the corn on the line. 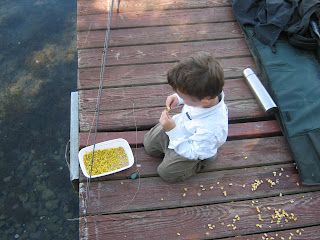 And miracle of miracles, A. managed to not lose Mr. Jason's two-inch baiting needle on the beach, despite repeated attempts by Cubby to do just that.

Cubby's buddy Mr. Jason arrived around 6 a.m. with a truckload of professional carp fishing equipment lent to him by a friend.  Did you know there are professional carp fishermen?  Oh yes.  It's apparently a big sport in Europe particularly.  And here we are with our own carp swim (that's pro-talk for a place to catch carp).  So we had a gathering of boys large and small, all intent on catching big-ass, ugly fish. 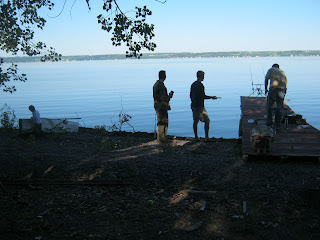 That's a lot of boys.

They had perfect weather for it.  They caught four huge fish, the biggest of which actually pulled the entire pole set-up into the water, requiring A. to make a dramatic running dive off the dock to save the borrowed equipment.  The resulting fish weighed 25 pounds.  That's a really big fish.

A. also slaughtered a lamb this weekend and grilled half of it for lunch on the beach.  Cubby, as always, enjoyed gnawing on the bones. 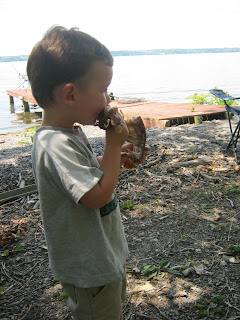 He has a history, you know.

Charlie put in an appearance, but wasn't much use when it came to reeling in the big ones. 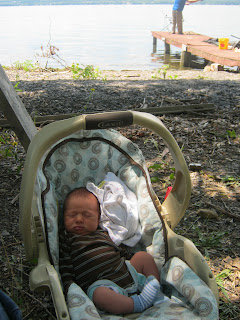 Considering they outweigh him by fifteen pounds or so, it's probably for the best.

They all had a marvelous, absolutely testosterone-fueled good time.  Because they are all small boys at heart, no matter how old they are.

Happy anniversary to A.  I landed a pretty good one myself.  (Sorry for the fishing pun.  I couldn't resist.)

P.S.  They ate some of the carp fillets for dinner, because, as I have mentioned, the white meat on carp is really good.  Not that anyone believed me.  Bunch of Doubting Thomases, the lot of you.
Posted by Kristin @ Going Country at 6:09 AM 7 comments:

Yesterday was not a good day.  Without dwelling on the details--since I'm already trying to forget it all as quickly as possible--I'll just say that there was not enough sleep and way too many toddler tantrums and screaming.

By the time the acceptable cocktail hour rolled around, I was more than ready for this: 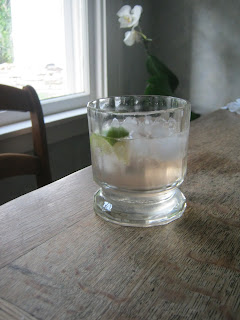 Due to the whole nursing thing, there was nowhere near enough gin in that gin and tonic.  But it had a good psychological effect, anyway.
Posted by Kristin @ Going Country at 5:06 AM 2 comments:

Know what's the opposite of fun?  Loading the whole family up into the Awesome Subaru for baby's first pediatrician's visit in the Small City, where the air conditioning in the No-Longer-So-Awesome Subaru dies.  And it's 93 degrees.  AND, I just spent almost four hundred dollars a couple of months ago repairing that very same air conditioning just so I would NOT end up sweating my ass off in the burning hot wind of open car windows while also dealing with two small children.

That's what I did yesterday.  It made me unhappy.  At least A. was with me to share the misery.

However.  Charlie has been given two thumbs up by the doctor and has officially gained an entire pound in a week.  I will take some credit for that, yes.  Thank you.

I guess that's all that matters.  Still pissed about the A/C though.
Posted by Kristin @ Going Country at 9:57 AM 2 comments:

The Return of Sunday Family Fun

Last Sunday was not such a fun time for the family, as half the members were incarcerated in a hospital room.  But this Sunday, reunited and ready for some fun, our newly expanded family struck out to create lasting memories.

Or at least just get off the property, which is really the only goal.

We didn't go very far.  Just to the village to get some ice cream.  A. and I got most excellent milkshakes and Cubby was totally enthralled with his scoop of vanilla ice cream, which he got to eat sitting on a high stool at the counter.  He didn't fall off his stool OR dump his ice cream out all over himself or the floor.  It was quite impressive.

Charlie--who A. has compared to a pet rock, in the most complimentary way possible, of course--slept the entire time in his car seat.  In the ice cream shop, obviously, not in the car.  He slept right through all the inevitable cooing by total strangers.  And then he slept right through our totally unplanned play date with our friends Jodi and Alyssa and their two boys, all of whom happened to be on their family's lake shore right next to the ice cream shop as we were walking back to the car.  Cubby, however, was wide awake and thrilled to play with all the lovely toys available in the sand box.

He was not so thrilled to have to leave behind the water gun he had discovered, though he was placated by a lollipop thoughtfully presented to him by the oldest of the boys.  And then Charlie woke up just as we were getting in the car and let us all know that he was STARVING and needed milk RIGHT NOW, and that was the end of Sunday Family Fun: New Baby Edition.

When a boy is a week old, he does this: 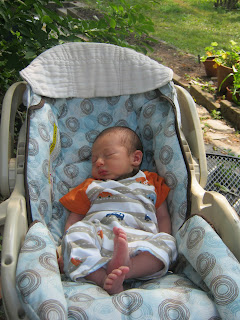 When a boy is two and a half years old, he does this: 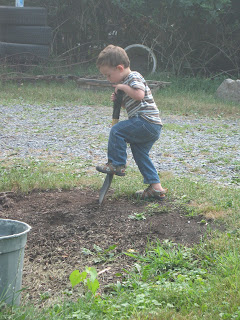 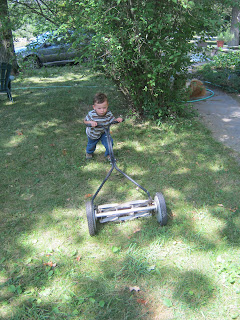 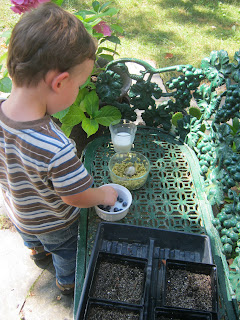 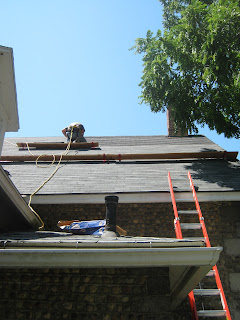 So who's got the best deal here?
Posted by Kristin @ Going Country at 3:15 AM 3 comments: