We ate seven meals this week from just three packages of meat I purchased. That may be a record. Also, I'm trying to use up the bits of things in the pantry and freezer before we move. I'm doing pretty well with it.

Long version: One of the best things about cooking large hunks of pork is that you then inevitably have enough left over for another meal. I always either shred the pork and simmer it with barbecue sauce for pulled pork sandwiches, or chunk it up and fry it in lard for carnitas.

I went with the latter this time, frying it in the rendered fat that had solidified on top of the juices I poured off from cooking the pork butt earlier in the week. So thrifty. And tasty.

Long version: I cooked the rice in the de-fatted juices from the pork butt. Doubly thrifty.

I sure did punk out on vegetables for this meal. Carrot sticks are what I consider a "grudging vegetable," meaning I know I need to serve some kind of vegetable, but I'm feeling sulky about having to make yet another thing, so I just peel some carrots and cut them up. Cucumbers also fall into this category.

Long version: A. and Jack were gone and the remaining children and I were due at baseball practice at 6 p.m., so simple was the objective here. I had some uncooked ground beef left from Saturday, which I cooked with a chopped onion, some barbecue sauce, and the remainder of two almost-empty bottles of ketchup that needed shaking with water to get the last bit of ketchup out. Waste not, want not!

Another thrifty thing about sloppy joes is that they are one of the only times you actually want to use the heels of the bread. The heels don't get soaked with sauce and fall apart like regular bread slices do.

The cucumbers this time don't count as grudging, because I made at least some effort with them. I made a dressing for the cucumber chunks with sour cream, red wine vinegar, salt, onion powder, and a little sugar. Okay, so it wasn't a lot of effort, but Cubby and Charlie seemed to like it.

Long version: Still just me, Cubby, and Charlie eating, so I heated up leftover sloppy joe meat with leftover rice and added some shredded cheese.

No one could ever accuse me of being a foodie.

Take note: Meal three with the ground beef I de-frosted on Saturday. But only because A. wasn't here.

And now! A break for a photo of the baby who still wants nothing to do with food except for greasy bones. 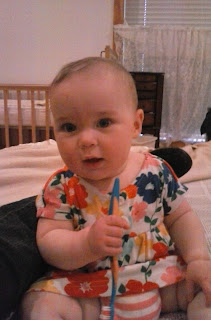 (New) toothbrushes are good to gnaw on, too, but much less tasty.

Long version: The pork chops were these boneless center cut things in odd shapes. Basically the leftovers from cutting more-standard pork chops, I suspect. Whatever, they were on sale and they were fine when grilled.

I made the cornbread to use up a bag of cornmeal that's been languishing in the freezer. While the oven was on to cook the cornbread, I roasted the broccoli and asparagus and made the apples. The apples were grocery store ones that were disappointingly soft. As they almost always are from the grocery store.

The boys ate the radishes, which A. picked up at the awesome produce store. They love them--and most other vegetables--raw. Man, I really need a garden.

Long version: The MiL sent A. home with several extra chicken breasts she had poached when she was making chicken salad for a party. So I cooked some diced bacon, then some diced onion, then added the diced chicken, deglazed it all with a little milk, then added some rice I had cooked in chicken broth earlier, then a couple of spoonfuls of mayonnaise, a little vinegar, and topped it all with shredded cheese before broiling it to melt and brown the cheese.

Got all that? Yeah, I don't know exactly what I did, either.

This was one of those sleeper hits where I wasn't sure anyone would eat it, and then they all ended up fighting over seconds and there wasn't enough.

Long version: The chili I made from a large bottom London broil roast (plus onion, garlic, tomato, cumin, chili powder, and a little vinegar).

The carrots were eaten whole by the children before dinner.

The tortilla chips I made because I found a few packages of the inferior tortillas in the freezer and a bottle of canola oil in the pantry with just a tiny bit of oil still in it. Plus, the pan from roasting the sweet potatoes was still all oily. So I just smeared the tortillas on both sides with the canola oil, cut them into triangles, spread them out, salted them, and baked them for awhile at 350. They were a hit. Unsurprisingly.

This About Sums It Up


So what's life with a pack of small boys like?

That turns into a grass fight with the cut grass left behind by the highway department mower . . .

And a boy with a clump of cut grass on his head who announces himself as "Captain Bird's Nest" (the next generation of Masked Morons* has arrived for sure) . . .

Which then devolves into three half-naked boys running around shrieking outside the house for an hour (or all-naked in one case) . . .

Because they've been locked out of the house until they submit to a freezing hose-down to remove the worst of the grass sticking to them . . .

And holding them down and hosing them while they cry and try to get away . . .

Then cycling all three in and out of the shower/bath . . .

And then cleaning about half a cup of cut grass out of the tub and wiping down mud on every wall of the shower stall.

In a word: exhausting. 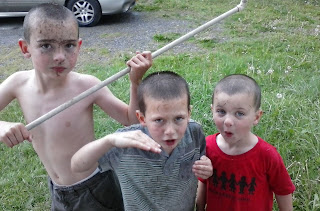 Though, yes, also sometimes amusing. Except I reached the end of my amusement right about hose-down time last night.


* I had the brilliant idea of writing a graphic novel about the Masked Moron and Captain Bird's Nest. It would be a surefire bestseller with eight-year-old boys. If only I could draw.