(Not at all chubby)

How does your garden grow?

And everything all in a row.

A few weeks ago, when A. and I were planting peas, carrots (successful), sprouting broccoli, and collard greens (not so much), Cubby asked if he could have some seeds for a fall garden.

A. showed him where he could plant, I gave him lettuce, snowpea, and cabbage seeds, and he dug out some trenches and made himself a garden.

I suggested to him today that perhaps he needed to thin his lettuce and gave him a bowl for the thinnings. This is what he brought in: 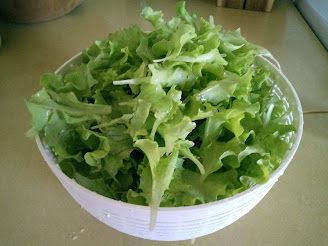 Boom.
If a green thumb is real, then Cubby has it. On both hands.
Not that this is totally unexpected. I mean, he did start successfully solo gardening when he was five years old. And he was the reserve champion for vegetables at the county fair last year.
Maybe by the time he's fifteen he'll have a market garden and I can buy all my produce from him. I wouldn't be surprised.
Posted by Kristin @ Going Country at 1:18 PM 7 comments:

Long version: Fridays are apparently for scrambled eggs now. But this time I had a couple of pieces of bacon to chop and cook first, and eggs cooked in bacon grease are definitely the best kind of eggs.

So Charlie and I stayed home and made some brownies. He doesn't care much about cooking, and Cubby tends to commandeer all the patience I have to help a kid in the kitchen, so Charlie never cooks anything. I do want him to learn, too, though, so we made some brownies together. He got to have one, of course, but then I froze the rest for our Sunday dessert.

Long version: I put a pork sirloin roast in the oven at 5:30 a.m. and left it there until about 10:30 a.m. Then I pulled it apart and used some of the chunks in the stir-fry, which also had onions, carrots, green beans, and banana peppers from the garden. I've never used slow-cooked pork in stir-fry before. It was good, although the texture was a little surprising. Softer than usual.

Long version: I had just enough ground beef left from Saturday to cook with some onion and barbecue sauce when I got home from work so all the kids could have a sandwich. A. and I had some of the leftover pork fried, carnitas style. I had mine with leftover calabacita/tomato/onion/garlic, and it was really good.

Long version: The only reason I made the potatoes was because I really needed to finish up the rest of the box of Sysco potatoes. Some were starting to liquefy, which is really disgusting. I also had some Velveeta cheese that was in the one of the many boxes of foodstuffs given to us by neighbors, plus a gallon of milk that was at its "sell by" date. So I figured cheese sauce was called for.

I made the potatoes in the morning and put the casserole in the refrigerator. Then, at dinnertime, I just microwaved the casserole until it was hot and stuck it under the broiler to get it a bit brown on top. It's really better baked for 45 minutes or so, but that is not happening when it's still over 90 degrees every day.

I used half Velveeta and half cheddar, and as soon as he tasted it, Cubby said, "This isn't cheddar." No, not entirely.

They all ate it without further comment, though, so I guess it was okay. Velveeta is definitely a weird cheese product, though.

A. has our shared cell phone in the school bus now, so I haven't been taking any pictures. So, to avoid a completely photo-less post, here's an old one. 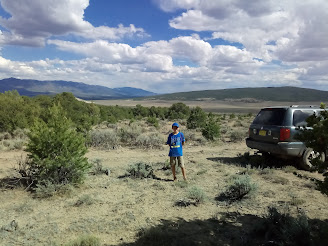 Cubby in the great emptiness on their elk scouting expedition.

Long version: The maintenance guy at school came to find me at work this day to ask if I wanted a dairy box and some chicken patties.

The dairy box is a USDA program box that has a gallon of milk, a quart of half and half, two containers of cottage cheese, and a large container of sour cream. They're part of the commodities program here, which provides food to most of the elderly residents in our county. There were two extra boxes left at the school a few weeks ago, and the same guy happened to see us at the track after church that Sunday and asked us to take them so they wouldn't go to waste.

So we got another of those boxes, and then this huge bag of chicken patties, complete with fake grill marks on the outside. I guess those were also part of the commodities delivery. I fried four of those for the kids in a pan with butter and they had them as sandwiches. They were all very happy with them. Perhaps not the most wholesome of foods, but a nice treat for them occasionally, and certainly convenient, as the patties cook from frozen.

Long version: I put the beef pot roast in the oven in the morning. I like to cook pot roasts with something tomato-y, so I used a small can of generic low-sodium tomato soup that one of our neighbors gave us in a box of commodities food. It was low in flavor as well as sodium, so when I re-heated the meat for dinner, I added salt, along with a cube of the garlic scape pesto I had in the freezer. It turned out well.

The meat cooked for several hours, and while it was in there, I also cooked one of the big winter squash from a plant in the front that the horse had accidentally separated from the vine. I don't think it was quite done maturing, but it was okay.

I also stuck a head of garlic in the oven to roast, and used some of that with the green beans and tomatoes. Yum.

Masks Are the New Mittens

One of the most annoying things for me about winter weather is making sure all of my children have two mittens (or gloves) before we leave the house. So many hours of my life have been wasted searching backpacks, pockets, and cars, or throwing every hat and mitten out of the box by the door looking for a matched pair. Or at least a left and right of something, anything to cover hands.

I do this a lot less now that we don't live in the far north, and I am still grateful for it.

But now! Now each child needs a face covering every time we leave the house! And those face coverings are small masks that are liable to get left behind wherever they go. The boys are pretty good about hanging theirs up by the door or keeping them in their backpacks. If the masks make it home.

Right now I have one for her on the bus, one in my purse, one presumably lost in the car, and one I think got lost in the house. I'm running out of masks for her and might eventually resort to duct taping her masks onto her ears so she can't just take them off and fling them any old where.

It is annoying, though.