I just found this on my kitchen floor: A disgusting old deer antler with a rubber band on it? Nope. It's a bow.

And this outside the dining room door: 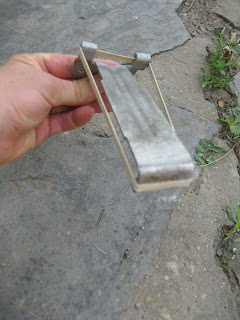 A random old piece of metal with a rubber band on it? Of course not. It's a crossbow.

The crossbow, incidentally, works pretty well. I shot one of Cubby's twig arrows a good ten feet with it. 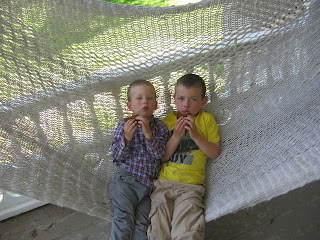 Not sure which is supposed to be Robin Hood and which is Little John, but they're both merry (little) men. Especially when they're eating pumpkin bread in the hammock. Beats tough venison in Sherwood Forest.

If you've spent any time around the mother of small boys, you will no doubt have heard her complain that her male children can turn anything into a weapon.

And I do mean anything.

To me (and to my mother, who gave it to us), this looks like two pieces to a foam boat that can all be pegged together and floated in the bath. 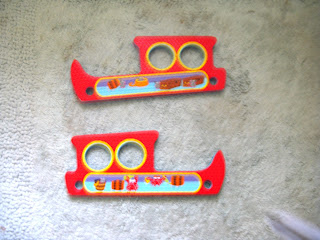 To my boy children, it looks like "bills," an imaginary animal that uses their hooked ends to battle each other. If that makes perfect sense to you, you are probably a man.

To me (and again to my mother, who again gave this to us), this looks like a pretty cool wooden rattlesnake. 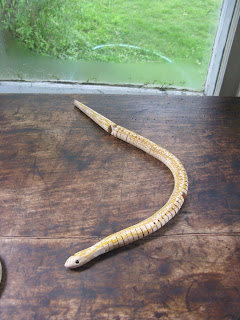 To my boy children, it looks like a whip for whacking your brother. Obviously.

We also have this electronic toy guitar that my sister gave us that just recently has been discovered to be a perfect rifle. It even has this lever on it that when flicked makes an electric guitar noise OR, if you are my sons, the exact noise the laser guns make on He-Man. It's about the most annoying thing ever.

I could go on, but I'm sure you get the idea. It doesn't matter what you give them, they will find a way to weaponize it.

At least they're creative. I guess.
Posted by Kristin @ Going Country at 8:21 AM 4 comments:

So basically, I started out picky about eggs and haven't really changed.

The problem with only really liking eggs cooked in bacon fat is that you have to have the bacon first. And I don't really dig bacon all that much. I mean, I'll eat a piece if it's there (and it's worthwhile bacon, which is not the case with most bacon), but I don't want to eat bacon every time I want to eat eggs.

On the occasions when I did cook bacon, I would have a happy couple of days following when I would have bacon fat to cook my eggs in. But the bacon just didn't make that much fat, so it didn't last that long.

You know what bacon does make a lot of bacon fat, though? The bacon from a Large Black Hog. This breed was one of the breeds of so-called "lard pigs," which means they were raised for their nice layer of fat.

We picked up the bacon from the MiL's pig this weekend and I cooked five pieces of it on Sunday morning. From those five pieces of bacon, I got enough fat to cook our eggs that morning, plus an extra half cup of fat.

That's a lot of fried eggs.

So now I anticipate always having a nice big bowl of bacon fat for cooking my eggs. And that makes me happier than I ever would have thought possible.
Posted by Kristin @ Going Country at 6:23 AM 2 comments:

Labels: all about me, fun with food
Newer Posts Older Posts Home
Subscribe to: Posts (Atom)