Friday Food: And Then There Was Mutton

Long version: I thought I was conquering the excess egg situation in my refrigerator when I was down to only five dozen eggs. Then our neighbor brought us three dozen more, and here I am, with ridiculous quantities of eggs in my refrigerator.

Not that I am complaining, given the difficulty some people seem to be having getting eggs at all and here they are just appearing at my door. Luck of the Irish, I guess.

It's been awhile since I've made the curry dip, which is simply mayonnaise and sweet curry powder, and it really is very good. Good with the carrot sticks, of course, but particularly good with the roasted potatoes.

I made chocolate chip cookies as a reward for the children. They really did remarkably well during their first week of Mom School. I know, you're not supposed to use food as a reward. I did anyway. So there.

Long version: This was the day A. slaughtered the wether. He always removes the tenderloin while he's skinning the carcasses, because those are the pieces of meat that run on the outside of the animal, on either side of the backbone. They're easy to take off without cutting the whole animal up, so we almost always eat those first.

The tenderloins were pretty small on this sheep, so I added some elk to the marinade too and cooked them both together, just pan-frying them. I set up a taste-test with some elk and some mutton on everyone's plate and had them all guess which was which. They all guessed right. That wether made some good meat.

Cracklins are the bits left from rendering fat. They're traditionally used to flavor cornbread. I didn't have any stone ground cornmeal left, so I made these muffins instead, but in pans because I loathe cleaning muffin tins. I made one pan plain and one pan with finely diced cracklins. A. loved the cracklin cornbread, though it wasn't so popular with the children.

Long version: Nothing to see here. Just the last of the bag of elk marinated and put into stir-fry. Jack was very happy.

The two older boys have been spending a lot of time riding Samson around our ghost village and letting him graze, so we don't have to feed him so much hay. 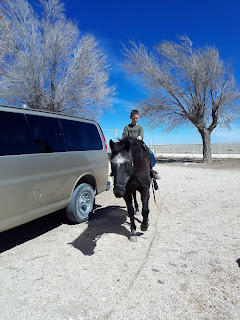 Good for the horse, good for the boys. And good for Mom to have two of the four children out of the house for awhile.

Long version: One package of chicken drumsticks simmered until the meat could be stripped, and there was good stock. Then onion, garlic, green chili, juice from a can of tomatoes, diced carrots and potatoes, and a can of corn Miss Amelia gave us added to the stock and chicken. Sour cream at the end to make it creamy and tame the green chili a bit.

This was one of those stews where I just kept adding things until I somehow ended up with a totally full pot. That's cool, though, because I purposely made a lot so I could bring some to Rafael and his wife. I would've brought some to Miss Amelia, but I think she's staying with her daughter in Santa Fe right now.

When the MiL came to visit, she brought the ancestral popsicle molds. These were the popsicle molds she used when A. was a boy. She has no further use for them, and I certainly do, so she passed them on to the next generation. I still have that flat root beer in the refrigerator, so we made the same popsicles as before, with the root beer, cream, and vanilla. 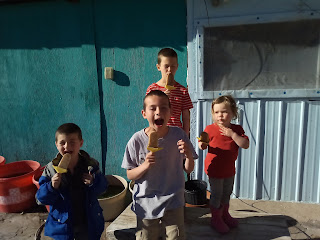 Long version: The pork was simply one of A.'s chunks o' butt (heh) cooked slowly in the oven, then shredded and mixed with barbecue sauce.

While that was in the oven, I also put in the beans. That was just some already-cooked pinto beans that I had frozen, which I put in a casserole dish with diced onion, ketchup, mustard, barbecue sauce, vinegar, and maple syrup. I don't have a real baked bean pot, but then, these aren't real baked beans. So I can bake them in this cool Art Deco casserole dish the MiL got me from our very elderly neighbors' estate sale when they moved. 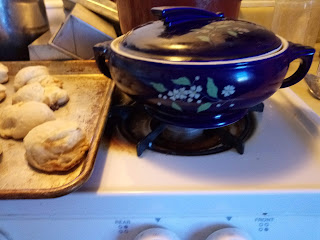 Much prettier than a bean pot.

The biscuits peeking coyly into that photo are these biscuits. I made them because I was already in the process of making bread, so I just took some of the dough out in the morning to serve as the starter for the biscuits. Hard to beat hot biscuits.

Long version: This was the day we butchered the wether (it hangs a few days to tenderize and improve the flavor), which is why I had planned on leftover meat. The last thing I want to do after handling raw meat all day is cook any.

While A. was doing the initial cutting, he set Jack up with his own cutting board and a paring knife to work on a small piece of meat. What Jack did was cut that one piece into many very small pieces. So I cooked those for him, because he was very proud of his end product. I just fried the pieces with paprika, garlic powder, and salt, and he ate them with ketchup. He was very happy with this.

Long version: This time I roasted the Italian sausage, which is a much better way to cook it than spattering grease all over my stove top.

For the pasta, I just mixed in butter, cream cheese, garlic powder, and pepper. So good.

Okay, your turn! What'd you eat this week? And a bonus Bizarro World question: If you've been to a store lately, what's the situation there? I haven't been in about four weeks, but I've heard from others that our regular stores are pretty depleted.


The peas are planted! A single Very Fancy Tulip survived the voracious gophers last year and is coming up near the driveway! I'm eating (a small amount of) arugula!

And the apricot tree by the door is in full and very impressive bloom. 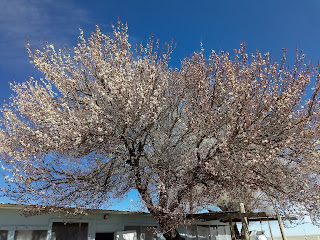 Hello, Spring. We're so happy to see you again.