Yesterday was as bad a weather day as anything else we'd had all week, which is saying something. It wasn't quite as hot, but OH MY GOD THE HUMIDITY. I literally spent the entire day damp with sweat (yum!) and chugging down water to keep hydrated.

But then, around 5 p.m., it started to rain. I was in the middle of making dinner, and the second we were done eating*, I made a break for the front porch with A. and Cubby in tow. We sat there for at least an hour, with the dogs keeping us company, watching the lightning and listening to the thunder as storm after storm moved through, bringing with it sheets of rain for the parched plants and a cool breeze that was such a blessed relief I was tempted to do a dance of thanksgiving to the rain gods.

I didn't, though. Do a dance, I mean. Instead I just sat out on my porch with my husband and my son (and the dogs), savoring the relief that Mother Nature had finally sent our way after a week of suffering.

* We could have eaten on the porch, but I try to avoid ferrying cutlery, plates, napkins, food, and baby any farther from the kitchen than is necessary.
Posted by Kristin @ Going Country at 8:13 AM 8 comments:

Labels: all about me, country livin', country wisdom, weather

If there is anything more masochistic than working in the garden in long pants and a long-sleeved shirt when it's 500 degrees* and the sun is still beating down, then I don't want to know what it is. And I REALLY don't want to do it.

So! Yes! Welcome to another garden post, in which I go outside to sweat out every last drop of fluid in my body because I SO MUCH ENJOY my "hobby" of vegetable gardening.

When does it cross the line from hobby to crazy?

Yesterday afternoon I ran outside for a quick turn around the garden while Cubby was sleeping. Just to check in, you know, since it had been several days since I had been out there. By some miracle, I did not actually do any work while I was just looking. That miracle may have had something to do with the fact that even that five minutes spent out there in the sun drenched me in sweat and made my face redder than a ripe tomato. Of which I still have none.

That's not the point. The point is that those five minutes convinced me that I really had to get out to work that night after Cubby was asleep. Even though it was so damned hot I considered parking my ass in the lake and not moving until the temperature dipped below 70. But no! Duty calls!

So after Cubby went down, I dutifully donned my long pants and long-sleeved shirt, in preparation for a blackberry battle. Blackberries, as you may know, have wicked thorns. And one of the things that needed doing was clearing some space around them so we could harvest the starting-to-ripen berries. We had very cleverly planted all around the blackberries with huge plants like potatoes that left very little access to the blackberries. Smartness, yes.

But the garlic patch was also next to the berries. And it was past time to dig the garlic up (early harvest this year, though), so I did that first, spreading it all out in the shed to cure. Then I pulled weeds taller than I am from around the berries, except for those evil pigweed plants that would not relinquish the hold their roots had taken in the hard, dried out soil.

I hate those bastards.

But then I moved on to the fun part of the evening: squishing Colorado potato bug larvae. WHEEE! Have you ever seen these things? They're obscene--all fat and orange and grub-like. They also squish quite readily, as they have not yet developed the hard shell of a mature potato bug. So I patrolled the many rows of potatoes, squishing the larvae with my fingers. My gloved fingers, thankyouverymuch. I am not generally squeamish, but I do draw the line at getting beetle larvae slime all over my fingers. As it was, some of the bigger ones exploded with such force that the slime landed on my sleeve.

But not as gross as I was by the time I finished all of this and made it back into the house for a cold shower. No matter. The most pressing of the garden duties have been taken care of, and I can now wait until next week to do more, when it will be a positively chilly 82 degrees.

More Fun with the Thermometer

Anybody remember the thermometer that we have in our bedroom so we know exactly how ridiculously, ludicrously, incredibly cold it is where we sleep in the winter? (Forty-seven degrees, to be precise.) Well, did you know thermometers are also fun so you can see exactly how ridiculously, ludicrously, incredibly hot it is too? Yes! Fun!

So how hot was it in our bedroom last night? Well, hot enough that I didn't even bother trying to sleep until 10:30 p.m. And then we were still lying there, wide awake and sweating, an hour later. Hot enough that I was draping a wet washcloth over my face. Hot enough that I got up out of bed and stood next to the bed to announce that I couldn't stand for any part of my body to touch anything anymore and OH MY GOD I WILL NEVER STOP SWEATING. Hot enough for A. to go all the way downstairs and get the floor fan from the living room so he wouldn't have to listen to me whine anymore.

To be specific, it was 85 degrees*. Which, OKAY, is not exactly surface-of-the-sun hot, but it's plenty hot enough to preclude sleep. The floor fan helped, even if the combination of it AND the window fan made it sound as if we were sleeping inside the engine of a particularly large airplane.

Incidentally, for those of you who were wondering, Cubby doesn't seem to mind the heat in the least. He appears to thrive in tropical conditions. Too bad our house is only tropical for about three weeks a year. Three long, long, hellish weeks. Boo.

* It was still 81 degrees when we woke up this morning. Refreshing.
Posted by Kristin @ Going Country at 6:20 AM 9 comments:

Labels: Cubby, the A team, weather

I got a call yesterday from a company requesting some clarification on an online order for a bicycle, paid for with my Visa card.

One small problem: I did not order a bicycle online with my Visa card.

Someone did, though. That same someone also bought $240 worth of something else from that company, as well as a $245 pair of sunglasses.

Expensive tastes, this thief has.

I mean, I'm not required to pay for those crazy sunglasses, of course, but I would like to speak to this person and ask them why those sunglasses were so very important that he or she felt the need to buy them with my credit card. Does the thief have a special medical condition requiring expensive wrap-around sunglasses to block all harmful UV rays? As well as doctor's orders to buy a bicycle and exercise?

I would like to give this person the benefit of the doubt, because I am a nice person that way, but in this case, I think I am justified in saying: I hate you, person who used my credit card. And I hope those stupid-ass sunglasses get stolen when you put them down somewhere.

Hi! Did you know it's hot? And did you know we have no air conditioning? And did you know that our bedroom is upstairs--you know, where heat rises to--and has heat-absorbing stone walls and west-facing windows that allow all that fabulous (HOT) afternoon sun to stream in?

Yeah. Not so much with the sleeping this week.

But this is not about MY misery*! Oh no! Today, we shall have a reasoned and carefully considered discussion regarding heat. Specifically, humid heat vs. dry heat.

Now. I feel I have some valid arguments for both sides in this matter. I have personally experienced both REALLY HOT dry heat in the form of the hellish heat island that is Phoenix, Arizona, and not-so-hot heat with the bonus of stifling humidity both here and in New Orleans. There is no doubt that even a dry 115 degrees is just too hot, and truthfully, nothing except glorious energy-sucking air conditioning will make it better. But you know what would make it worse? Humidity. ANY humidity. And so I always come down on the side of hotter-but-drier, personally.

When it's hot AND humid, your body tries desperately to cool you down via the sweat evaporation method. Except the sweat doesn't evaporate. Which just leaves your clothes damp, your face dripping, and your general disposition less than sweet.

Also, damp towels don't dry when it's humid, they molder. And let us not even SPEAK of the horror that is my hair.

So! Now that I have inflicted my own opinions on you, tell me, poppets: Would you rather deal with a dry 115 degrees, or a humid 95 degrees? And why?

* Of course it is. Lemme just lay it out for you all succinct-like: THIS SUCKS AND I AM MISERABLE. Okay, all done now. Thank you for your attention to my whining.
Posted by Kristin @ Going Country at 5:46 AM 16 comments:

Labels: all about me, confessions, weather

Lettuce, Prepare To Meet Your Maker

I was just out in the garden harvesting the absolute last lettuce of the season. I've thought a couple of times in the past week or so that surely the lettuce would bolt and be done for, but then it got weirdly cool and the lettuce kept soldiering on. But I KNOW this is the absolute last lettuce we'll be able to eat until fall. And the reason I know this is because our weather forecast looks like this:

HAHA! Just kidding on that last one! Death Valley doesn't have crippling humidity to add to the fun.

The lettuce might not be the only casualty here.
Posted by Kristin @ Going Country at 7:27 AM 7 comments:

A Green Fourth of July

Green as in recycling. As in, recycling a photo. As in, I was too feckless to take a new photo and so am just re-posting this one of Cubby in his patriotic outfit. But recycling is now hip and cool! And so, I am hip and cool instead of feckless and lazy. 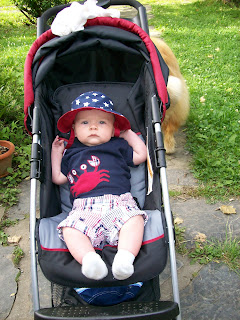 Patriotic sunhats are good, too.
Posted by Kristin @ Going Country at 7:30 AM 4 comments: