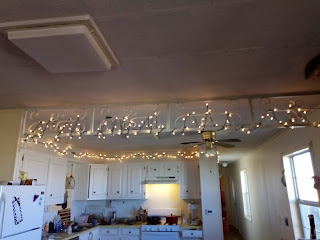 These are not Christmas lights. They are Thanksgiving lights, because they're only white and only in the kitchen, which is the center of all Thanksgiving festivities. 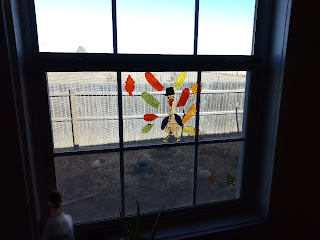 Window decals courtesy of my sister and applied by my very careful children. 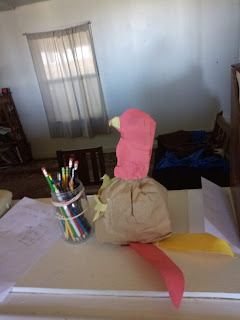 Preschool art from one of the children. Maybe Charlie? There's no name on it, and I have now had three children go through preschool, so who knows. 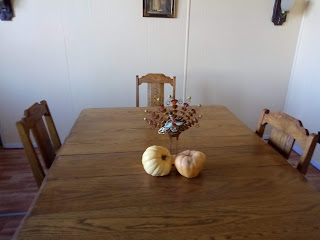 Turkey centerpiece given to me by my mom seventeen years ago (yikes), with the further embellishment of two malformed squash that never matured before the frost. Festive!
We also have lots of meat on hand: 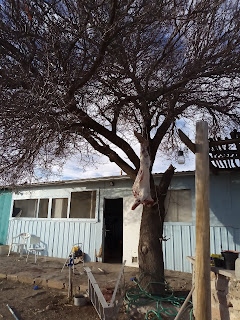 Conveniently located in the apricot tree right outside our front door.
A. killed the ram yesterday--for reasons mostly to do with wanting to avoid inbreeding with his incoming group of offspring--and it is currently aging for a few days before we butcher it. So that, along with the bull, will ensure we have a very full meat freezer.
How are your Thanksgiving preparations coming along (if you're American, of course)? Any big plans?
Posted by Kristin @ Going Country at 11:33 AM 4 comments:

Long version: I decided I really should use the beef stock that was in a cracked jar in the freezer. I don't know why glass jars ALWAYS crack in my freezer, but they do. I don't freeze things in glass jars anymore, mostly, but this was a jar that had been sitting in the refrigerator and I just popped it into the freezer when I was afraid it was about to go bad.

And then, of course, it cracked. Annoying.

Still usable, though. I just let it thaw in a big bowl and lifted out the big pieces of glass.

So I used that for the soup, which also had half a can of tomatoes that had been in the refrigerator for awhile, onion, garlic, quite a bit of roasted green chilis, carrots, and potatoes. Plus the bull beef, of course, which this time was a package of "steaks" that I cut up small.

I simmered the meat for about four hours, but I should have done it for another couple of hours. It was still pretty chewy, though the soup was tasty.

Long version: Cubby and I had some of the leftover soup, and everyone else had some leftover taco meat with rice and cheese.

Random photo that is not at all timely. 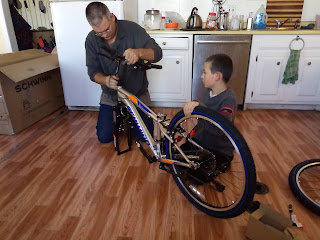 Cubby got a new bike a couple of weeks ago--an early Christmas present from my parents--and had a great time putting it together with A. That boy still loves his tools.

Long version: Okay, I didn't burn everything, just several things. Charlie helped me make peanut butter cookies for dessert, and I charred those. I spent about ten minutes scraping the black bottoms off, and they were eaten, but definitely tasted pretty, uh, barbecued.

Incidentally, I was not going to make a dessert this Sunday, because we have a huge bag of candy from Halloween still, of course. But then Cubby asked what I was making, and when I informed him of my plan, he said, "But candy doesn't feel like a dessert. It isn't baked."

I also charred on one side the squash cubes I was roasting, and allllmost burned the calabaza I was steaming in a pot when the water boiled off and the calabaza started sticking to the bottom of the pot.

And, as a fun bonus, I burned my mouth when I tasted the peppers I had randomly put in the pan with the chicken. Apparently, immature Alma paprika peppers are spicy.

Long version: Actually, the same leftovers as Saturday, but no garlic bread. The kids all ate rice, taco meat, cheese, and sour cream. A. ate the last of the bull soup, with some of the hot peppers from the roasting chicken added. I had a salad.

Long version: Miss Amelia gave us a couple of pounds of real ground beef from her son's ranch last weekend, and Cubby wistfully asked me if I could make meatloaf with it. I don't make meatloaf from the cheap Sysco ground beef, because it's too mushy and wet, so I haven't made meatloaf in awhile. There wasn't quite enough of Miss Amelia's ground beef to make all the meatloaf for this family, but I mixed it with some of the cheap stuff, and it was good.

Long version: Just some more of the Sysco ground beef I had left in the refrigerator, knowing I would need something I could make quickly after work. Cheeseburgers and rice are it. 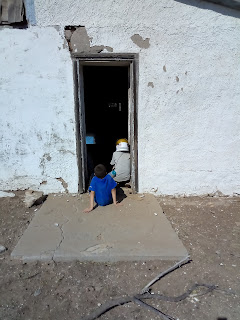 Long version: I don't really know what this cut of meat was. It was labeled "London broil," but it was labeled by us and we don't know anything. It was very thick. I marinated it in vinegar and oil, plus spices, to hopefully tenderize it a bit. Then I just seared it, then sliced it as thin as I could against the grain. It was still basically raw inside. I put the slices back in the hot pan--now off the heat--and mixed in some of Finny's sauce and finely grated Romano cheese. It tasted really good, but it was still pretty chewy.

I think that's going to be the continuing theme with this bull meat.

So! When we last left our intrepid house-rehabber, he had pulled down the ceilings and was slowly and arduously wheelbarrowing the detritus into the dumpster parked outside the house. He also continued removing paneling from the walls to expose the original stone or plaster, revealing all the many colors the house was painted inside at one point.

He definitely filled that dumpster, which was picked up last week, but he did not quite finish the clean-up. Even absent that handy dumpster, however, the work must go on, so he started filling trash cans and old feed tubs for transport to the dump. 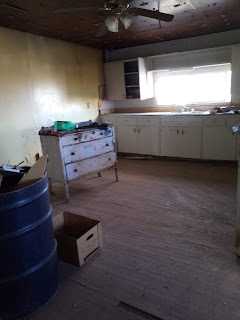 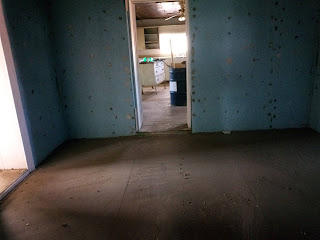 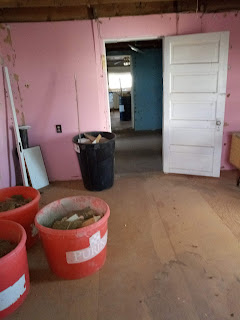 There are still a couple of rooms that need to be cleaned up, but it's beginning to look more like a house that can be worked on, rather than a house that should just be razed.

It's a long time before we will be inhabiting this house, but we've moved in some new tenants in the meantime. 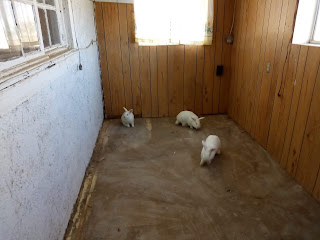 Hasenpfeffer!
We have, in the past, discussed getting meat rabbits, but I'm always reluctant to add yet more animals to our menagerie. Unlike A. and the children, who want allll the animals.
However, when our neighbor asked us if we would like to take his granddaughter's 4-H meat rabbits--she's no longer doing 4-H, and he's a cattle rancher, not a rabbit-fancier--I couldn't really say no. He wouldn't even take any money for the rabbits. Or the home-built hutch he insisted we take, as well. Or the half-full bag of rabbit food he likewise bestowed upon us.
So now we have six meat rabbits. Two bucks, and four does.
Our neighbor had them all in the hutch, but we felt bad having them in such a small enclosure. 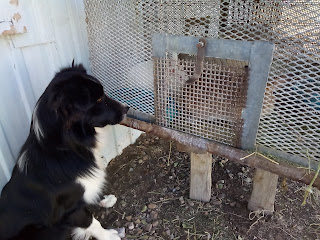 Jasper sat here by the hutch for HOURS the day we brought the rabbits home. He wasn't the least aggressive, interestingly, he just appeared fascinated. Maybe he thought they needed herding.
Rabbits can actually be somewhat difficult to keep in, due to their habits of digging and gnawing. That's why we put them on the concrete porch of the casita next door. No rabbit is gnawing or digging out of a concrete-floored room with concrete walls.
We were originally going to separate the bucks with two does each by having the white ones in the casita and the brown ones in the hutch, but we decided instead to put a divider down the center of the casita porch so the brown ones have more room, too. A. is going to do that today.
We might have to use the hutch to separate the bucks after the does have babies, because we're not sure how aggressive and problematic the bucks might become with the young. To be honest, we're not sure about anything, because we've never had rabbits before.
We'll learn, though. And isn't that what life is all about? Growing and learning every day?
Right. Or something.
Posted by Kristin @ Going Country at 5:41 AM 6 comments: