It sure is handy to live in the perpetually frozen north when it's time to defrost the freezer. Just load all the freezer stuff up into bags and throw it out the door. 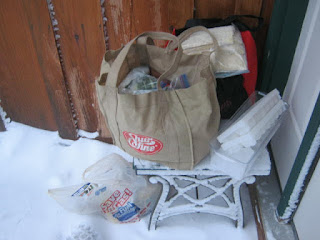 No worries about thawing here.

Still keeping on the sunny side. Or on the frozen, winter-y side, as it were.

My Good Deed for the Decade

We had an incident of the woodchuck variety last weekend wherein A. got the minivan stuck on ice and I had to ride to the rescue with the Awesome Subaru to pull the van up the icy incline. This required A. to search through the back of the Subaru to find rope and a knife to cut the rope.

This is how I became aware of the absolutely appalling state of the Subaru. Empty beer bottles and cans galore, traps, bits of rusty wire tangled up in everything, jumper cables twining all over the place, a logging chain . . . it was horrendous*.

The flotsam did yield the required rope and knife, and we did get the minivan off the ice. But the mess in the back of the Subaru continued to haunt me.

So today, when Jack and I were outside for a little airing*, I decided I would at least get the beer bottles and cans out of there. So I did. Then I put all the loose traps and pieces of wire in a bucket, untangled and coiled up the rope, put the logging chain in a box, stowed away the jumper cables, sorted through various bits of trash and empty bags . . .

And then I found it. In an innocuous-looking, opaque plastic bag, which seemed kind of heavy and when I peeked in to see what was in there . . .

OH MY GOD, SO GROSS.

It was a deer heart. Yes, the heart of a deer.

A. had saved it for trapping bait when he shot a deer. He shot the deer two months ago. That deer heart has been sitting in the back of his car for TWO MONTHS. Of course, it was frozen much of the time. But still. That is so, so wrong.

Because I have been married to A. for almost 14 years now, I wasn't all that surprised to find such a thing in his car. And it didn't occur to me to throw away the ancient deer heart. Instead I left it in his car and mentioned it to him when he was about to go check a trap. He was very pleased that I had discovered some bait that he had forgotten about, as he's almost out.

I'm glad he's so pleased with his tainted deer heart. But I don't think I'll be clearing out his car for him any time soon.

* It was 35 degrees and blowing wet snow, so it wasn't so much an airing as an endurance, I suppose. Jack seemed happy enough to be out, though.

Labels: all about me, confessions, country livin', the A team


So how did today's snow/ice day off from school go with me home with all three kids and A. gone?

Well, at one point, there were about five of these signs around the house: 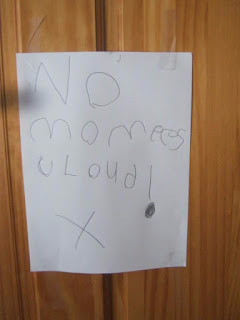 I give points for the proper use of an exclamation point, though the spelling is abysmal. It does get the point across, however.

That particular sign was retaliation for the fact that I wouldn't give Cubby a second bowl of yogurt. OH, THE INJUSTICE.

Freedom of assembly comes in many forms*.

There were various other unpleasant parts to the day, culminating in Cubby putting himself down on the couch with a blanket at 5:30 p.m. while Charlie squirmed around my feet complaining of a stomach ache and Jack threw things at him.

Tomorrow is a new day, full of fresh promise. And school. Alleluia.

* I couldn't help but think, with some amusement, that he was basically doing what pretty much all those protesters on Saturday were doing. They should have just used his chant. There's something to be said for a simple message like that.


This morning at 5:43, the phone rang with the announcement that school is closed today due to weather. Our forecast was calling for 5-8 inches of snow, all falling during school hours, so I was anticipating this.

I thought how excited Cubby and Charlie would be to not only get to stay home from school, but play out in the snow, too.

Then I went outside to let Mia out and almost went ass over teakettle on the quarter inch of solid ice coating the porch.

Not so much a snow day as an ice day, then. Super.
Posted by Kristin @ Going Country at 4:06 AM No comments: