Grandparental Spoiling Is the Connecting Theme

I had a bunch of photos on my camera that I finally uploaded to my computer and I realized that in every one of them, the children were wearing or playing with something given to them by a grandparent.

Because apparently, if it were left up to their parents, they would be naked and playing with nothing but sticks.*

Good thing they have doting grandparents. 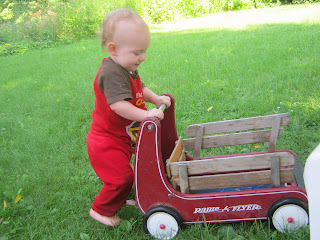 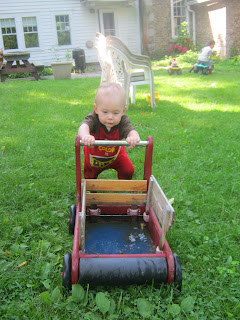 Also courtesy of the big brother in the background, since it was technically given to him for his first Christmas. 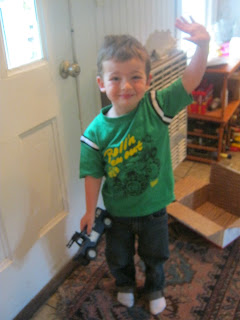 Monster truck shirt and jeans generously donated by my parents. The truck there came from his aunt. The truck's name is Gordon. Why Gordon? Why not? 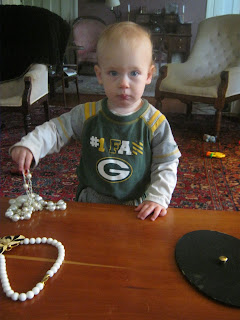 Packers outfit from my dad the Wisconsin native, also a Cubby hand-me-down. The plastic bling originally belonged to my grandmother, Duchess (she did love her costume jewelry--the gaudier, the better), and was passed along to my children by my mother.

Hey, at least I buy their underwear and socks.

* Though it must be said that they do really love nudity and playing with sticks. Maybe we're on to something here.
Posted by Kristin @ Going Country at 11:02 AM 2 comments:

Every few weeks, I hand off the Cubby bedtime duties to A. and run away after I put Charlie to bed around 6 p.m. I don't run very far--just to the Small City. And I certainly don't do anything very exciting. My usual reason for going (other than to get the hell out of the house without any kids in tow, which is of course the real reason) is to buy some item of necessary clothing for the children.

This is why I was shopping for underwear, socks, and shoes last night. None of which were for me. And all of which are quite shockingly expensive if you're used to buying everything at the low prices charged for thrift store clothing. But I draw the line at buying used underwear, socks, and shoes for my kids, so I hand over my credit card with a silent whimper for the new stuff.

I also always stop at the grocery store on my way home, which is kind of thrilling. I miss going to the grocery store. A. usually goes for me since he's in the Small City almost every day for work anyway. He's very good about buying everything I put on the list, but when I go, I always remember things I might forget to put on a list, or things that we don't need right now but are three-for-one, or something.

I also always stop for ice cream on the way out there. Because I'm all about the wild personal indulgence.

It's not exactly a week at the spa or something, but it is a break from parenting. And really, a break of any kind is all I need sometimes.
Posted by Kristin @ Going Country at 6:51 AM 5 comments:

Just another Wednesday: Up at 5:30 a.m. with Cubby, to story hour at the village library at nine, home for lunch and naps.

Then A. hit me with a shocker: How about we go to the Pageant of Steam with the kids after their naps?

Internally, I was one big, "NOOOOO." But all I said was sure.

The Pageant of Steam is an ENORMOUS steam engine show that's a little over an hour away from us. It covers a hundred acres, all filled with old machines in various states of restoration, many of which are in operation for the show. Also a giant flea market featuring such scintillating items as rusty old tools and spark plugs and so forth.

Not really my scene. Plus, over two hours in the car with both kids? I could see the future, and it did not look promising for our ear drums.

A. has wanted to go for years. He was so determined to make it this year with Cubby that he actually wrote it on his work calendar. We were planning to go on Saturday, but since that's the last day of it and it would be kind of winding down, A. wanted to go today, which is opening day.

So we did. It was just as I expected. That is, large and loud and chaotic and smelly from all the engines running. Charlie did okay in his stroller, but Cubby was ROYALLY PISSED that he wasn't allowed to climb on all the machines. Not a single machine did he get to play with, since the old dudes that restored them were not keen to see a three-year-old yanking on the levers and playing with the buttons.

We got him an ice cream sandwich and a tiny monster truck toy at the flea market as condolence prizes, but he was still displeased.

Charlie only screamed the last half hour in the car on the way home, because it was pretty much his bedtime and he was so far from done with the sitting in straps.

A. was awed by the scope of the event, and I know a little disappointed that we could only spend two hours (only, yes) looking around, thanks to the children and their tolerance for such things.

Their tolerance is better than mine. My condolence prize was a peck of peaches we bought at a local orchard on our way home. It doesn't quite compensate for the Pageant of Steam trauma, but maybe by next year I'll have recovered so we can do it all again.

I was in the kitchen late this afternoon absorbed in the consuming task of cleaning out my already-used skillet sufficiently so that the frittata I was making would come out of the skillet cleanly at the end for a show-stopping dinner. Or at least not a fallen-apart mess. It was a very important thing I was doing, obviously.

So important that I left Charlie to his own devices in the dining room while I attended to my skillet. When I checked on him, he was busy with the laundry basket on the floor. It was a plastic laundry basket filled with clean sheets. I figured pulling the sheets out would occupy him for at least a few minutes. Long enough for me to get my pan in frittata-ready shape.

As I was wiping the pan out and putting it back on the stove to fill with the egg mixture, I heard a loud thunk from the dining room, followed by a baby wail of the "OWWWWW" variety.

I ran in to find the laundry basket on its side and Charlie screaming next to it. When I picked him up, I saw the blood in his mouth.

It was ALL OVER his mouth. I couldn't even figure out how he had hurt himself. I brought him outside into the sunlight so I could investigate more closely while he cried all over my shoulder and dripped blood and spit on my shirt. I figured he had probably just bitten his lip somewhere, but I wanted to be sure he hadn't bitten right through it or bitten the end of his tongue off or something equally horrifying.

After a couple of minutes of dabbing with a paper towel, I ascertained that there was no really awful damage. Which left me with a still-crying child. How was I supposed to explain to a year-old baby that it's no big deal? You'll just have a swollen lip! Nothing to cry about!

Except he's a baby, and crying is sort of their thing. So I went inside and grabbed a big ice cube from my gin and tonic for him to suck on.

That's right. I was drinking a gin and tonic when my son injured himself. This just gets better and better. At least I rinsed the ice cube off before giving it to him, so he wasn't drinking gin too. Though that might have helped with the numbing effect.

In the end, the only visible signs of his accident were a slightly swollen upper lip and one perfect frittata. Seriously. Lovely brown crust, came out of the pan completely intact, tasted great. Charlie loved it.

P.S. I'm sure you can guess that despite my flippant tone, NO parent EVER wants to see blood dripping from any part of his or her child's body. It's terrifying even if you know it's minor. Thank the god of frittatas that this was minor.
Posted by Kristin @ Going Country at 5:56 PM 8 comments:

There are a lot of things swirling around in my head with little organization or coherence. Here you go:

Anyone else automatically picture that awful hazing trick of sticking someone's head in the toilet and flushing it when the word "swirly" is mentioned? And why do I automatically think of that? I've never been on either side of that particular gross activity.

We've had a lot of apricots to make into jam this year. We LOVE apricot jam in yogurt. This year I tried a flavor combination suggested in this book I got for Christmas a couple of years ago and haven't actually used thanks to that second baby I had. There was a recipe for apricot preserves with white wine or lemon juice and vanilla beans. I used lemon juice and some vanilla extract because I don't have the beans. DAMN, THAT'S GOOD.  I ate an entire pint pretty much by myself last week.

A., of course, prefers the straight-up apricot jam with no vanilla, because we don't agree on anything (taste-wise, that is). Luckily, we have about a dozen pints of it to keep him happy.

I'm making stew for dinner today. Hooray for cool-enough weather to simmer stew! In that stew is the meat from three different kinds of animals: deer, elk, and lamb. The deer and elk meat came from Mr. Jason. The lamb came from this. I used onions, garlic, potatoes, carrots, and thyme from the garden, and a basswood spoon carved by A. to stir it. Who is this weird locavore with hand-carved wooden tools? Oh right. That's me.

You know what?  I never want to use the word "locavore" again. How faddish and pretentious can a word get? Forget it. Do not describe me as a locavore. I'd rather just be called a gardener. The implication of that is that a gardener eats his or her own food, anyway. So yeah. I'm a gardener.

I think that's enough swirl for now. Over and out.