I've been trying to find a time to vacuum out my van for, oh, about four months now. The interior of vehicles here takes a severe hit in the winter and spring, what with all the mud and salty snow from boots, plus leaves, small rocks, twigs, and God knows what else. Basically, the outdoors ends up inside my car.

I had to do it when it wasn't raining. And when Jack was asleep. And when either Cubby or Charlie was absent, so there wouldn't be a death-fight cage match over the vacuum cleaner.

This combination of factors was very difficult to achieve. But finally today it was sunny and dry, Jack was taking a nap, and Cubby was at the last day of his foreign language camp. Hooray! Vacuum ahoy!

What a sad life I lead.

It took longer than I thought, thanks to the sheer size of the minivan and all the innumerable cracks and creases and places for filth to accumulate. But eventually, I got it done.

When we left an hour later for Cubby's end-of-camp picnic, I reveled in my (relatively) clean vehicle. So tidy! So satisfying! 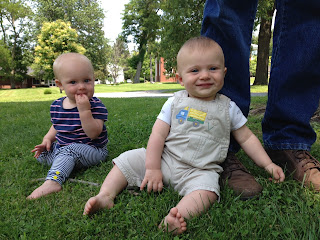 Apropros of nothing, here's a picture of Jack and my friend Alyssa's daughter at the picnic. She's exactly one month older than him, somewhat smaller, and a lot more mobile. Both adorable, though, without doubt.

When we got back in the van two hours later, the older children were covered with sand from the water play in the sandbox at the playground. Cubby announced from the way back* of my nice clean van, "Look at all the sand coming out of my sandals!"

They were also clutching popsicles, which I took from them with the promise that they could have them back in two minutes when we got home. I was trying to salvage some small bit of cleanliness from my labors, you see.

Then, when we were almost home, I turned around to talk to Charlie (A. was driving, never fear) and saw what I thought was a chunk of dirt on the floor of van. So I reached over to pick it up, and literally as my hand closed over it, I identified it.

It was poop. Excrement. Shit. Probably of the dog variety. And I had picked it up with my hand.

Luckily, it was dry. I threw it out the window and then sat there in my formerly clean minivan with shit on one hand, popsicles clutched in the other, and did the only thing I could do. I laughed until I cried.

* This is what my siblings and I always called the last row of seats. As in, "I got the way back!" as we raced toward the car, throwing elbows and scrimmaging for the most coveted seats.

P.S. For those who were wondering, my mother's surgery went well. There was actually less damage to ligaments and so forth than was anticipated, so that's a positive. She's in the pain management stage of recovery now, which is to say her leg hurts like hell and probably will for awhile. But she is, as ever, her very pleasant and optimistic self.
Posted by Kristin @ Going Country at 5:13 PM 3 comments:

Labels: all about me, Cubby, family, Jack, manual labor

To Nana, With Love

My parents were supposed to come for a visit this Saturday. The children were very excited to see Nana and Baca and play with them down on the beach and in the gully and wherever else the children wanted to play, because Nana and Baca are down with anything when it comes to the grandkids.

But then a stupid rock ruined everything.

Specifically, a rock on a hiking trail my parents were on last week. The rock was in the mud. The rock slipped in the mud when my mother stepped on it. Her foot turned under her and two bones at the bottom of her leg broke in a most spectacular fashion.

"Spectacular" in this case meaning very badly. She is not traveling anywhere in the near future. Like, not until October, which is the best guess for a full recovery. Serious, serious bummer.

Before the recovery can even begin, however, she has to have surgery. This surgery is quite involved and will feature plates and pins and OWOWOW. It's at 1 p.m. today. I really, really wish I could be there to lend moral support, if nothing else.

Alas, distance and small children mean that this is the best I can do: 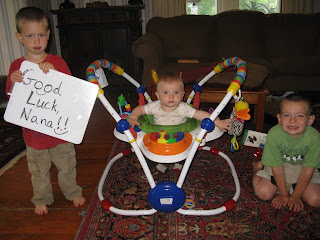 These goobers do love their Nana.

And one more for good measure, because Jack is smiling in this one. 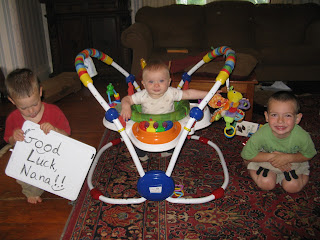 Smiling babies can't heal broken bones, but they're good for keeping your spirits up.

We love you, Nana, and we're sending all good vibes across the country to you today. And, more importantly, to your surgeon.
Posted by Kristin @ Going Country at 8:48 AM 4 comments:

Poor Jack. Being the third of three boys is going to be a challenge, for sure. It already is. Mostly because of Charlie.

Jack wants to play on the floor with a toy? Nope, Charlie's there hovering over his head, grabbing the toy, precariously balancing on one foot over Jack's face.

Jack wants to eat his yogurt and prunes? Nope, Charlie's all up in his face, patting his head, poking his legs, kissing his hand.

Mom wants to get a photo of Jack in his special Father's Day "My Daddy Rocks" shirt? 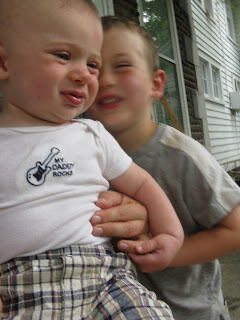 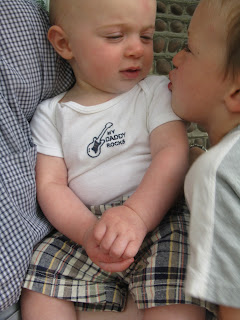 There he is. In Jack's face.

At least Jack gets lots of attention. I guess.
Posted by Kristin @ Going Country at 9:17 AM 3 comments: