Long version: The lamb was a front leg roast I pulled from the top of the meat freezer. The front legs can be a bit tough, so I put it in a covered casserole in the oven for a few hours, with apple cider vinegar, garlic powder, and salt, until it was tender. Then, at dinnertime, I sliced it and put it in a pan with minced garlic, three lonely whole tomatoes left in a can, mashed, and asadero cheese.

I had a pint jar of navy beans in the pantry that have been sitting there for quite awhile. I think I got the original bag several months ago from one of the neighbors' excess commodities food. I also had a ham bone that had been in the freezer for, um, so long I don't even know how long. So I cooked the beans with the ham bone, then added sauteed onion, garlic, and bell pepper, plus a few tomatoes from the same random can the lamb tomatoes came from.

I had originally planned to cook it down to a drier consistency, but in the end, I basically made it into a thick soup. It was good, in any case.

Long version: The sliders are just very small hamburgers seasoned like meatballs, then fried and covered with Finny's sauce and asadero cheese. I love these. Easier than meatballs, but almost as tasty.

Long version: The time had come to address our excess rooster situation. We had three roosters, which is two roosters too many. So at sunset on Saturday--chickens become quiescent when it's dark--A. pulled out two of the roosters and removed their heads. He hung them overnight and gutted them and de-feathered them the next day after church.

One of the roosters was the small white one that came with Rafael's flock he gave us. 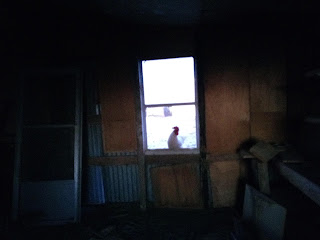 He spent a lot of time hiding here in the barn, away from the other two bigger roosters that beat him up all the time.

The other rooster was the one we got from the school almost three years ago, named, by Charlie I believe, Little Man. 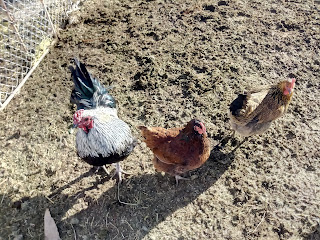 Little Man with his original harem, also from the school chicks.

Little Man was definitely no longer little, and he was most definitely mean. Every single member of the family had been spurred by him. So when A. carried Little Man out of the coop to meet his destiny with a cleaver, the children all cheered.

You reap what you sow, chicken.

Anyway. Given the advanced age of these roosters, I figured pressure cooking was the best bet. Also given their size. Little Man in particular was HUGE.

So I pressure cooked them. I got about six cups of meat and three gallons of stock from those roosters. I used mostly the white meat to make dinner, mixing the shredded meat with stock, green chilis, garlic, and cream cheese, and then topping it with shredded cheese and broiling it to melt the cheese.

It was good, but I think it needed more flavor. Maybe more cream cheese. I only used about a quarter cup, because that was what was left of a package.

I made the cobbler to use up some of the large quantity of Sysco frozen strawberries that I'm trying to get out of the freezer. I didn't use a recipe. It was just the strawberries, sugar, and vanilla topped with slightly sweetened baking powder biscuits.

Long version: A work day, and another opportunity for kitchen creativity. Otherwise known as, "Everyone just needs to be fed in the most expeditious manner possible."

So! For the children: Leftover rooster meat, some of the stock, leftover rice, leftover cooked onion (remember: Just Cook the Onion), leftover corn, half a can of leftover tomato sauce we got from a neighbor (the other half was in a soup I made the day before), grated cheese, sour cream, cumin, chili powder, all combined in a skillet.

For A.: About a cup of the chicken mixture mixed with some ground beef and vegetable soup I had made on Sunday to use up some leftover ground beef that didn't get cooked when I made the sliders. I put some extra sour cream in his bowl, too, to make it creamy.

For me: The last bit of cleaned and chopped lettuce that needed to be used up, leftover roasted bell pepper and onion, some shredded cheese, and one egg I fried and chopped up, topped with the very last of the vinaigrette that I needed to get off the counter.

And thus was everyone fed quickly and many leftovers were disposed of in a tasty manner. Success.

Long version: A. bought actual pork chops this time, rather than the gnarlier pork steaks. It was very exciting, and they were very good. I just browned them and then cooked them in a covered skillet with the sauerkraut in the oven for an hour or so.

Also exciting: I had the brilliant idea of substituting sour cream for the yogurt I usually use in my ranch dressing, because I wanted it to be less drippy for dipping. It worked, and it was good, although the texture was a little more grainy. Maybe next time I'll try half yogurt and half sour cream with the mayonnaise.

Long version: Another workday, another opportunity to clear out the refrigerator.

Charlie, Jack, and Poppy had corn tortillas with cheese and the remainder of the chicken/rice skillet from earlier in the week, plus carrot sticks with ranch dip

Cubby had the last serving of a ground beef and green chili vegetable soup I had made on Sunday, mixed with the last bit of the white bean soup, and some rice added.

A. had leftover pork and sauerkraut, plus some leftover cooked carrots.

I had a salad with leftover cooked carrots, leftover roasted bell pepper and onion, cheese, and deli ham with some of the ranch dressing.

Everyone had food and many containers were removed from the refrigerator. Yay.

Long version: More random pork thrown in the oven and cooked, then chunked up and fried in fat with spices.

I am not what anyone would call an adventurous cook.

Charlie came lurching blearily out of his room at 5 o'clock this morning, and I sent him right back to bed. That's just not enough sleep on which to manage a long school day.

He went back to bed without protest, but at 5:30 he was back, saying he just couldn't sleep any more.

The furnace happened to be running, so he shuffled off to the bathroom to assume his favorite morning position. 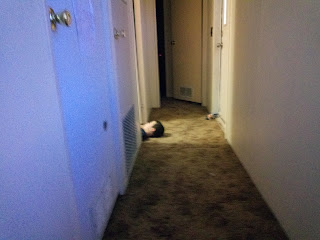 Reading with his body on the heating vent in the bathroom, and his head cushioned by the carpet in the hall.
Just as he got settled, though, the furnace turned off. He shuffled back through the kitchen with a resigned expression and announced on his way through, "The day is fighting back."
Some days are like that. Even in Australia.
* If you have no idea what the title and last line of this post are referring to, you have probably not read Alexander and the Terrible, Horrible, No Good, Very Bad Day as many times as I have.
Posted by Kristin @ Going Country at 5:37 AM 5 comments:

Today's tip is brought to you courtesy of Kay, who left a comment on Sunday to the effect that her clothespins have to be replaced periodically, due to the high winds on the prairie where she lives.

And I have a solution to this! Well, something that worked for me, anyway.

See, we also have very high winds here on our mesa. And I don't have a dryer, which means all my clothes get hung outside on my clotheslines. That means that my clothespins are very, very important. And also very, very well-used.

When we moved to this house and A. put up my clothesline, I had to buy clothespins. So to the Internet I went, confident that I would just find some good old wooden clothespins to order and be on my laundry-hanging merry way.

Which is when I discovered that most wooden clothespins are garbage.

They appear to have mostly fallen into the category of craft supplies. Like for the cute little Christmas tree ornament made out of a clothespin and painted like a snowman that Charlie brought home from preschool a few years ago.

Those might be great for Christmas ornaments, but they would be nothing but trouble on a frequently-used clothesline. They are cheap. And they are flimsy.

But! While I was poking around online and researching my clothespins--for far longer than I ever thought I would do such a thing--I discovered the existence of metal clothespins. I did not know that was an option.

There are different styles, but the ones I got are kind of short and chunky, with a rubber grip part on the inside to hold clothes. 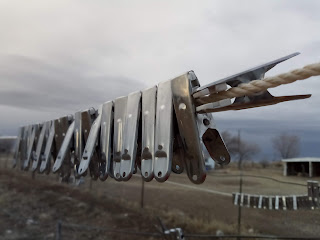 Close-up of my clothespins in the wild.

And they most assuredly do hold clothes. I have had laundry out in 30-mile-an-hour winds that hasn't come off the line. In more than two years of constant use, not one clothespin has broken.

The only downside to these might be that if you live in a wet place, they might rust, but here in the almost-arid West, rust is not an issue I deal with.

I hardly ever link to actual products, and I am certainly not getting any payment for this, but if you want to try these, these are the ones I got.

Happy line drying. May the sun always shine on your laundry and the birds never perch above your line. 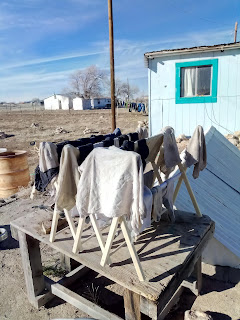 Finally using the small drying rack the MiL sent for my birthday. Friday was pretty much the only day I wasn't working that featured good clothes-drying weather without terrible winds, so I did ALL the laundry. And ran out of clothespins. And that is why all the cloth napkins are on the drying rack. Thanks, MiL! 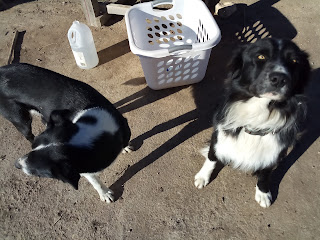 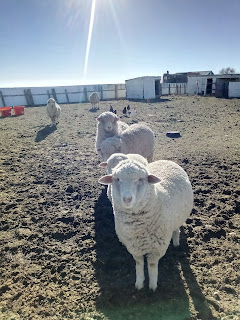 Celestial sheep. That's not all wool bulking up those ladies. Some of them are very, very gravid. We expect a lamb any day now. 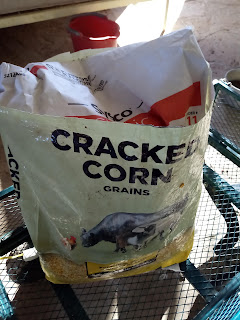 Is it corn? Is it flour? After dealing with two consecutive 50-pound bags of flour from Sysco that have ripped in my chest freezer (where I store it, because it's out of the way and rodent-proof), I decided to encase the paper flour bag in an empty feed corn bag. The corn bag is plastic. It won't rip. So there. 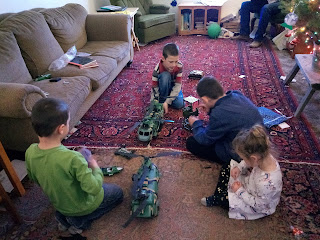 For my mom, who wanted to know how the kids were enjoying the multi-piece soldier and military vehicle sets she sent them, and that they opened on Epiphany: They LOVE them. Many happy hours with many vehicles and innumerable tiny weapons. (Although that girl in the sparkly pants did state that she wished she had got a stuffed cat instead of a tank. Her brothers were happy to commandeer the tank, though.)
And there we are! My life, snapshotted.
Posted by Kristin @ Going Country at 4:30 AM 5 comments: