The daffodils and hyacinths are in their full glory right now, filling the border around the lawn outside the kitchen door with the sight and fragrance of capital "s" Spring.

We were supposed to get some strong thunderstorms this afternoon, so I thought it would be nice to bring some of the flowers inside to enjoy before they got beaten down by this hypothetical torrential rain. I figured Cubby would be into it, so I asked him if he wanted to help me pick some flowers.

And then I got a lecture about how flowers are only for looking and smelling, NOT for picking. Thanks a lot, goody-goody episode of "The Cat in the Hat."*

After a little discussion about how these were our flowers and we had lots of them and as long as Mommy or Grandma said it was okay we could pick some to bring inside, I managed to convince him that we would not be wreaking havoc on the flower population or endangering the survival of any animals by cutting a few of the hundreds of daffodils currently blooming on our property.

And of course, once Cubby realized that "picking" flowers actually means cutting them with shears, he was all for it. I grabbed an empty canning jar to stick the flowers in and we got to cutting. 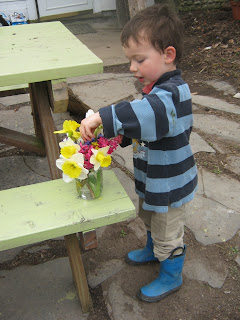 I was going to put them in a real vase when I brought them inside, but they looked so nice in the canning jar, I just left them there. We're all about the accidental rustic charm.

Meanwhile, I had abandoned Charlie to his own infant devices on the grass, but he wasn't totally unsupervised. 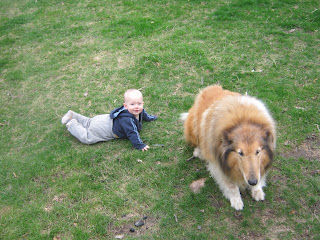 A boy with three dogs is never alone for long.

The heavy thunderstorms have yet to materialize, but the little spring bouquet does look awfully nice on the dining room table. Smells good, too, thanks to the hyacinths.

With all due respect to "The Cat in the Hat," flowers around here are for looking and smelling both outside and inside. So there.

* "The Cat in the Hat" on PBS is actually a pretty good show for little kids, and one of the few I allow Cubby to watch.
Posted by Kristin @ Going Country at 5:54 PM 4 comments:

What's a Guy Gotta Do To Fix a Tiller Around Here? 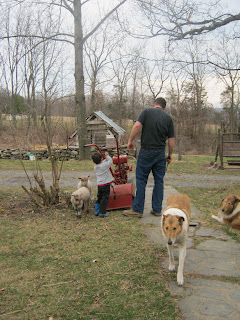 Business as usual at Blackrock.
Posted by Kristin @ Going Country at 5:30 PM 1 comment:

I was all set to tell you about my educational encounter with ants that absolutely reeked of Lemon Pledge--it's a thing; read about it here--but then, as so often happens, food trumps all.

As I was washing five millions dishes this evening, I found myself considering a snack before bed. We had soup for dinner. It was quite good as soups go, but it was . . . soup. Which is not entirely filling. Frankly, it's the bread that usually accompanies soup that is really satisfactory. But we don't eat bread.

I always find popcorn to be almost mandatory after a soup dinner. But I kind of wanted something sweet. I considered adding chocolate chips to the popcorn after popping it, as several people I know do, but that seemed awfully messy to eat. Then I thought maybe I should just add some brown sugar in with the melted butter before pouring it on. That would be kind of like caramel corn, right?

And then, as I was wiping the counter, I came across the maple sugar.

DINGDINGDING! We have a winner!

The maple sugar came to us courtesy of Mr. Jason, who is given to experimenting with maple syrup. That's what happens when a single man ends up with multiple gallons of syrup. He made the sugar and gave us about a pint of it to try. I hadn't figured out what to do with it so far, but its extremely fine consistency--almost like powdered sugar--made me think it would mix well with melted butter.

So after I popped my popcorn, I melted the butter in the still-hot pan and added a little bit of the maple sugar. Not too much, because I didn't want it to be too thick and clumpy. Then I drizzled it on the popcorn, added salt, and mixed it all up with a spoon.

You know what I made totally inadvertently? Kettle corn. Maple kettle corn. Is there a better popcorn on earth? No. There is not. It was an entirely welcome surprise on a random Tuesday night and just the right thing to cheer me up after a not-very-cheery day.

So, should you ever find yourself with maple sugar, now you know what to do with it. You're welcome.
Posted by Kristin @ Going Country at 6:22 PM 4 comments:

Labels: all about me, friends, fun with food

Cubby has been fairly magnanimous since being supplanted as The Baby with Charlie's arrival. Cubby will--after much coaching--"trade" toys with Charlie so Charlie at least has something to play with when Cubby takes something Charlie has been looking at*. He will also find a baby toy for Charlie unprompted, which is nice to see. If I ask Cubby if Charlie can look at one of Cubby's toys, he'll usually say yes.

But you know what Cubby is totally NOT DOWN with sharing? 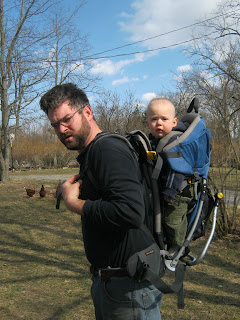 Last week when we were going on a Family Fun excursion in the woods, I mentioned that it was warm enough and Charlie had gotten big enough that I could try carrying him backpack style in his baby carrier. To which A. replied that maybe we should try him in the big carrier.

What? A walk with the family during which I am not weighted down with an enormous infant? OKAY.

So we put Charlie in the pack. And Cubby immediately was all, what the hell is this?

I can kind of see his viewpoint. The pack is a sacred thing to Cubby. The pack is how he was conveyed on all the most fun excursions of his young life. The pack means bonding time with Daddy. The pack is HIS.

We did not remove the interloper. I offered Cubby a lollipop to enjoy during our walk, since he was such a big boy! He can walk! He can have a lollipop!

He took the lollipop. He did not stop crying and protesting.

So on our way up the lane to the woods, I brought out the ultimate Cubby pleaser: The hatchet.

The hatchet is, well, a hatchet, except the other side of the blade is a hammer part. It's small, and quite dull, and one of Cubby's favorite things in the world. I offered him the hatchet. And that was the end of the tears. "Okay! Here, Mommy; hold my lollipop."

He totally forgot about the lollipop in favor of the hatchet. That's my boy.

I ended up carrying Charlie in the pack myself anyway because I had to bring him home early for his dinner, but it was nice to relinquish him to his father for a short time, at least. After I made it cool with Cubby, of course.