Dispatches from the Asylum

Cubby's friend was supposed to come over to play this morning, but his mother called at 7:30 a.m. to let me know a stomach bug has descended upon their house and she didn't want to bring it to our house. I really appreciated that, although the boys were very disappointed that a new playmate wasn't coming over after all.

Those boys--who are definitely not going outside this morning--are currently testing out their submarines in the downstairs bathtub. The submarines are made of cardboard, duct tape, and Tinker Toys. They refused to believe these wouldn't be seaworthy craft.

So now they're all in various stages of undress, getting in and out of the bathtub, and the downstairs hallway is strewn with parts of sodden submarines, extraneous articles of clothing, and puddles of water.

And this, my friends, is Christmas break with small children.

Updated dispatch, 12:10 p.m.: The submarine game ended with Jack peeing on the bathroom floor. On purpose. I am currently hiding in the bedroom with the sleeping baby, eating leftover birthday cake while Jack naps and Cubby and Charlie watch The Secret of NIMH 2. Four more days of Christmas break to go.


How to celebrate the momentous occasion of my 38th birthday today? First with pancakes. 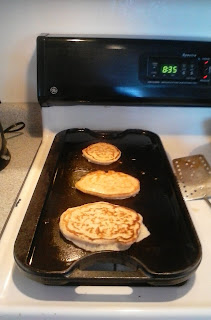 Made on the new griddle my parents gave me that cooks three whole pancakes at a time. They've given me HOURS of my life back.

Then with a solo walk*, followed by a shower.

And tonight, with spaghetti and meatballs--pre-made and pulled from the freezer, as was the sauce--followed by cake and ice cream. The cake is the top tier of our second wedding cake. I didn't think my parents would mind if I used it as a birthday cake instead of an anniversary cake next November. This way, I get to eat cake without having to bake it. 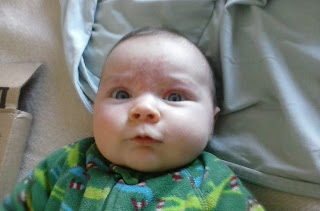 And all I had to do to get rid of it was deliver these cheeks. Good trade.

Happy birthday to me. Pass the carbs.

* It was ten degrees below zero, but very sunny and with very little wind, so it wasn't bad. Besides, as A. once memorably remarked, "You would lie on a bed of nails if you could do it without the children." Too true.

Labels: all about me, baby stuff, fun with food


Despite the 11-degree temperature+wind, Cubby and Charlie are outside sledding down the snow hill created by the plow guy yesterday. Poppy and Jack are napping. A. is working. Mia is sleeping.

It's a fleeting moment of quiet in a household where quiet is a rare commodity, and you'd better believe I'm reveling in it.

Merry day after Christmas, my lovelies. I hope it's peaceful wherever you are.
Posted by Kristin @ Going Country at 11:09 AM 2 comments:

Christmas, Coming At You 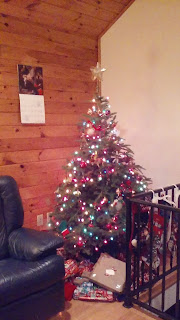 I managed to stave off the excited hordes until 6 a.m., at which point they rushed upstairs to look in their stockings.

And then there was a candy break.

This year there were Nerds Ropes in their stockings. Do you know about these? I didn't, until A. bought one once at a gas station like two years ago and the kids have been talking about it ever since. They're these chewy candy ropes--kind of like a Twizzler--that's covered in Nerds.

They're absolutely revolting. In my opinion.

But Christmas is all about making dreams come true, so Nerds Ropes in the stockings it is. And then they all ate them. At 6 a.m. 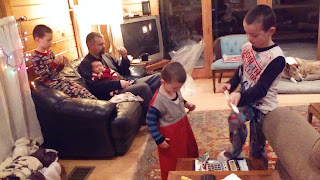 Even A. got one and ate it right away. The perfect accompaniment to coffee, apparently. 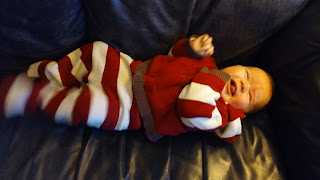 Poppy didn't get one. She got a couple of diapers in her stocking, and doesn't look pleased about it. But at least she was crying in a festive outfit!

After they started their Christmas sugar consumption, the present opening began. The first gifts to be opened were Lego sets from my parents. Cubby opened his and shouted, "HOORAY! This is EXACTLY what I wanted!"

They went downstairs immediately to start dumping out tiny pieces and building ninja bases. Or whatever they are. 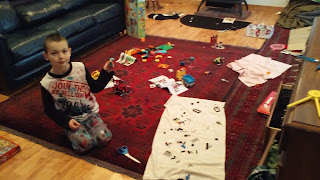 When I sent my dad this picture with a thank you e-mail, he wrote back, "I thought your life needed more tiny pieces on the floor." Yeah, me too.

They got lots of other things from relatives, and played with all of it. At 10 a.m., when they were all still in their pajamas and had consumed almost all of the candy from their stockings--along with one of A.'s famous gigantic omelets--I announced that there was one more present, but it was outside and they had to get dressed to play with it. 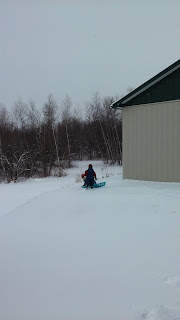 Shortly after this, the snow started falling more heavily and the wind picked up. So now we're having an arctic Christmas.

Merry Christmas to all of you from all of us.

Kids in the Kitchen for Christmas

The first day of the kids' Christmas break from school yesterday was a real doozy.

After very little sleep the night before, I was less than enthused to make breakfast in the morning. So I let the boys do it. Specifically, I had Cubby fry eggs and Jack and Charlie on toast duty.

Cubby actually can make eggs if I supervise and remind him to, say, put butter in the pan before he cracks the eggs. You know, so he can actually flip them rather than scraping them off the pan. Jack and Charlie can make toast if I cut the bread and take it out of the hot toaster. Basically, they press the button down and spread the butter.

But they did manage to mostly make breakfast. And it killed half an hour of a very long day.

A. did get Cubby and Jack out to the woods for an adventure before the freezing rain started. It continued almost all day, resulting in what the weather people referred to as "a glaze" on top of the existing snow.

I have no qualms about booting my kids outdoors in almost any weather, but I do draw the line at freezing rain. That's just miserable. So they were inside almost all day.

At 11 a.m., in an attempt at distraction, we made egg nog. We had all the ingredients, and Charlie and Cubby loved the egg nog we bought for them at the store last week. I did not love the ingredients, so I decided we should just make some ourselves.

We used this recipe, except we didn't chill it, because you try telling a three-year-old he can't immediately consume whatever he just helped to make.

It was really good. And there were minimal smackdowns over who got to measure, stir, and crack eggs. Hooray.

Oh, and I also didn't add the bourbon. I didn't have any, or else I would have been very tempted to doctor up my own glass.

After dinner, in response to a comment by Charlie that he wanted to watch karate movies, A. showed them a montage of Bruce Lee fight scenes on YouTube. They were, predictably, enthralled, though Charlie asked quite reasonably why the guy had to have his shirt off all the time.

I had never noticed that, but Bruce Lee does indeed almost always have his shirt off. Perhaps to make him immediately recognizable in a crowd of other high-kicking men.

Also predictably, the watching of kung fu was immediately followed by the practice of kung fu downstairs, which is when I heard Charlie ask Jack, "Are you ready to fight a five-year-old with no shirt?"

In fact, they all took off their shirts and donned their long underwear bottoms, in their best attempt at kung fu attire. It was really funny, and it kept them all entertained until Charlie and Jack collided and cracked their heads.

Then it was bedtime and I made the dough for cinnamon rolls in the morning*.

They didn't help me with the dough, but in the morning the early bird got to help with assembly. 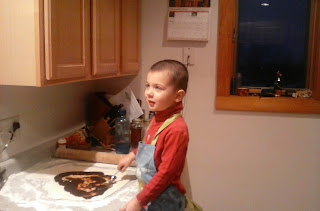 And he had just the apron for the job.

So that was a good start to the day.

Unfortunately, A. determined yesterday that the exhaust system in the Honda was leaking, resulting in exhaust in the car. Which means we do not want to transport our small children in it. And we can't all fit in the Subaru unless one of the adults just sits in the cargo area in the back.

The odds of getting the Honda fixed during this holiday week are pretty low, so we'll be sticking around at home. We're supposed to get 6-8 inches of snow tomorrow, and then the temperature is going to drop waaaay down. Like, below zero almost all week.

So if you need me, I'll be here with four sick little kids, huddled in the house and cooking.

Maybe we'll just have eggs and toast for every meal. Then they can make it themselves.

* I used this recipe. Cubby said he wished he had twelve thumbs, so he could give it twelve thumbs up. They are pretty damn good, if I do say so myself.