Most of the game meat I have left in the freezer is long-cooking stew-type stuff, and I really do not want to be doing that when it's 100 degrees every day. So I've been using more of the store meat A. has found on his forays to the Outside World. It's like we're Modern Americans or something.

Long version: Okay, not all the way modern.

For the antelope, I just seared it, took it out and sliced it, then put the pieces back in the pan with some basil pesto.

Does that sound familiar? Yup. I am definitely a one-trick meat-cooking pony.

That doesn't sound quite right.

I had to bake bread anyway, which is the only reason I made garlic bread. But you know the exciting thing about baking bread this time? I could also roast the vegetables at the same time, because I now have two whole oven shelves.

Long version: A.'s brother and his family arrived this day for a short visit. Making tortillas requires high heat on a large cast-iron surface for a long period of time, and thus, does not happen when it's too hot outside (and inside my kitchen). But the high this day was only about 87 degrees, so I could make tortillas without feeling like I was going to combust.

You may have noticed there is nothing patriotic about this Fourth of July meal. Too bad you couldn't see the inadvertent fireworks when I was frying the pork on the griddle pan and some of the grease got in the burner flame. There was a fire at least ten inches high. It was pretty impressive.

I immediately turned the burner off, of course, and before I could get the baking soda out of the cupboard, it was out. And nothing was damaged.

I'm sure our guests found that little pyrotechnic display at the stove very festive. 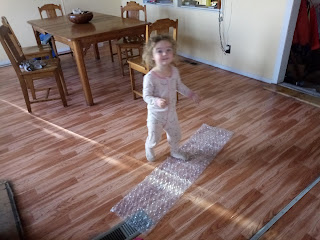 Nothing like some bubble-wrap popping in footie jammies first thing in the morning.

Long version: I didn't fry all the pork on Saturday after it was cooked, so I shredded the rest of it and mixed it with barbecue sauce for sandwiches. And yes, I have zero problem serving leftovers to guests.

A.'s brother brought the kielbasa, and I made that, too, to make sure there was enough meat. There was.

I used some of my frozen Sysco bananas to make the ice cream and was congratulating myself on having the foresight to get such a large quantity and freezing it in chunks for future fake-ice-cream-making. Too bad the school Sysco program isn't offering bananas anymore.

Long version: It was a bit too hot to be roasting chicken at high heat for two hours, but still only around 90 degrees, so I made it anyway. We had one of those big chickens, which I salted in the morning and put back in the refrigerator. Then I just rubbed some basil pesto I had on hand all over it and put it in a 475 degree oven for a couple of hours. It came out well. 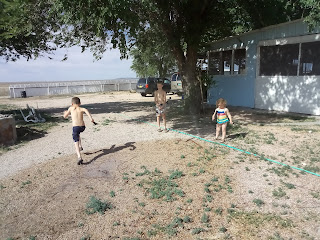 When your mean mom refuses to put the sprinkler on the hose because she insists on watering the boring plants instead of catering to her hot children, you can always make do with a leak in the perpetually punctured hose.

Long version: My brother-in-law also brought some steaks with him. They were labeled "chuck tender steaks," but I know the chuck isn't really that tender--I usually pot roast it--so I cooked them more rare than I normally would so they wouldn't get tough. So, about medium. I really don't like rare meat.

This was the first time we've had beef steaks in about a year. Exciting.

Long version: A. found these seasoned drumsticks on a clearance shelf in the grocery store meat section. I was afraid, this being New Mexico--Land of Enchantment and Chili Everydamnwhere--that the red seasoning on it would be some kind of burning chili powder.

It wasn't. I think it was paprika.

Anyway. They were okay. I asked A. to cook them because I was in bed with Poppy crawling all over me while I continually blew my nose and bore with great fortitude the cold that Cubby, Jack, Poppy, and I all came down with simultaneously.

I made the soup earlier in the day because Cubby had a terrible sore throat from the cold. It was really much too hot for soup (85 degrees in the kitchen at 5 p.m.), but potato soup is Cubby's preferred illness comfort food--and, not coincidentally, mine too--so I made it anyway. Just onion, garlic, potatoes, carrots, Better Than Bouillon chicken broth, and milk blended to make it smooth.

Simple, but appreciated. I put some bits of chicken in it for Cubby, too, and he was very happy. He had two bowls. And I got to eat the leftovers cold for lunch the next day, which was also quite nice.

Long version: And everyone was fed. The end.

The Newest Member of the Kitchen Team


I've been holding out on you. I mean, we've had a new range for three whole days now and you didn't know about it.

Anyway, I guess it's not really that exciting, because the new range is pretty much exactly the same as the old range. Which was really old. It was a brand called a "Holiday," that is no longer made. It was in the house when we got here, so I don't know exactly how old it is, but I'm guessing about thirty years old.

To replace the Holiday, I purposely bought what is euphemistically referred to as an "entry-level" range, for which you can read "cheapest." I did not want anything with excess electronics and digital displays. Or buttons. Not only does that stuff always break sooner rather than later, but I wanted to be sure that I could use it when the power goes out.

The Holiday didn't have any electronic parts at all. But since it's no longer possible to buy propane stoves with pilot lights--at least not at a standard appliance store--I settled for getting one that only has electric igniters. If the power does go out, I can still light the stove burners with a match.

A. installed this thing in about fifteen minutes, which was something of a miracle. I was sure there would be some mysterious parts that would need to be ordered and would delay the installation. But no.

There was one part that had to be taken from the old stove and put on the new one, but other than that, it looked pretty easy. Possibly because I didn't do any of the work. 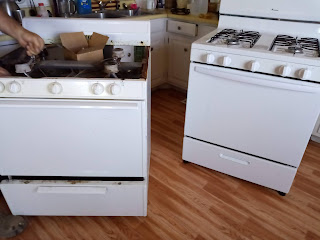 Although they look similar, the new range has several important differences. For one, the burners actually light on their own without the aid of a match. For another, the oven door closes tightly. Also, the burners aren't clogged with decades of grease, resulting in dirty, greasy, sooty stuff getting all over the bottoms of my pots and thus all over the kitchen.

And finally, and perhaps most excitingly, the oven has two whole shelves. I've been working with a single oven shelf for two years now, so this is a very welcome change.

There are a couple of things that I'm still getting used to with the new range--namely, two of the four burners don't seem to have a low setting, so I have to be careful which ones I use when I want to cook something gently--but overall, it's a great improvement.

There. Now you're all caught up with the excitement at our house.