Friday Food: A Non-Food Surprise at the End

Long version: The MiL arrived the night before for a visit, and what did I serve her for her first meal in our home? Yup, leftovers and fried eggs.

I also gave her a list of things to pick up at the grocery store in Albuquerque before she drove to our house, because that is standard protocol for guests driving into the great emptiness where we reside.

Long version: Of her own volition, the MiL stopped at an Italian market in Albuquerque and bought fifteen pounds of Italian sausage for us. She was determined we should have good sausage. Apparently, all it takes is driving three hours, because it was good sausage. Everyone was very excited.

I threw this meal together very quickly after we got home somewhat late from an excursion to a mission church forty minutes away where they have Mass once a month. The same one we took my parents to and then had a picnic. I didn't pack a picnic this time. Good thing we had some quick-cooking sausage and those handy par-cooked roasted potatoes when we got home after 5 p.m.

The peppers and onions were a frozen stir-fry mix. I had fresh peppers, but this was quicker.

Long version: I always make pizza for guests, so that's nothing new. The pie is new.

You may notice I never make pie. Well, actually, you probably didn't notice, but I don't. I don't actually like pie that much, and I just don't have any practice or skill at it. The MiL, however, is a Pie Master. She actually won a ribbon at the fair for her pie once.

Unlike me, Cubby does like pie, so I've decided he should learn from the MiL and be our resident pie expert.

So the MiL and Cubby made a crust (with all butter, because I don't have any lard on hand): 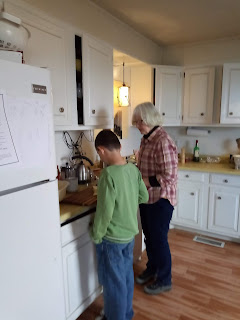 Master Pie Class in my kitchen.

The rest of the children feel as I do about fruit pies, but they do all love pudding. So I made chocolate pudding (using this recipe) for this pie: 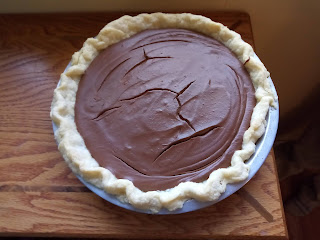 I'm sure there's some trick to avoiding those unsightly cracks, but . . . I don't care.

And then I took a picture of a piece covered in whipped cream and sent it to my dad, because it was his birthday: 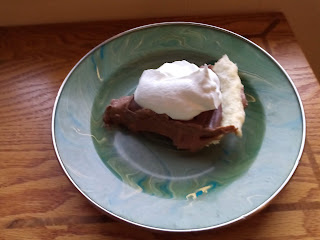 Happy Birthday, Dad! I got you a piece of pie you don't even get to eat! Who's the favorite child NOW?

Long version: We took an excursion down the hill to a ranch where A. fixed a crack in a brick house for the lady who gave us Samson. The MiL wanted to see the horses there, and there's an abandoned settlement there with yet another historic church.

Because we didn't go until the afternoon, I brought a dinner picnic with us, which we ate in the shade of the church. Here are some pictures. 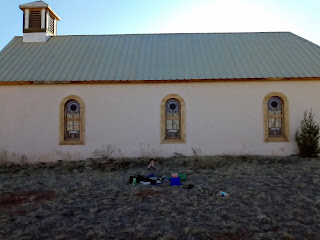 Poppy was the only child who actually sat down to eat. The others took their sandwiches to go. 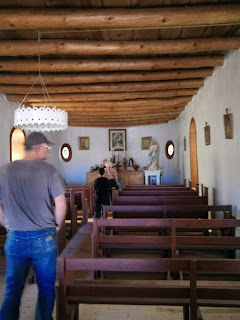 I'm so glad I live in a place with so many lovely churches. Ugly churches are a sad thing to me. 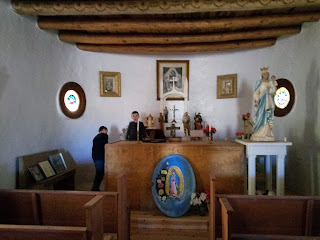 I mean, look at all the decoration on the altar. All this for a place with maybe a hundred people in its heyday, and certainly almost no money.

Long version: I also always make tortillas for guests. We had this meal early so the MiL could drive back to stay in Albuquerque before a very early flight the next morning.

Long version: I'm still trying to finish the last box of huge potatoes we got at Christmas. They're starting to sprout, so I need to partially roast some more and get them in the freezer. I will conquer the potatoes in the end.

I made the custard specifically to use up some milk that was past its date, as well as some of the ten dozen eggs in my refrigerator. (Long story.) Unfortunately, I found when I heated the milk--as well as a full cup of cream--on the stove that the milk was far enough past its date that it curdled. Ew.

I couldn't tell a difference from the original, so it's nice to know I can make it with less of the cream and separated yolks and still get a good result. Cream is sometimes hard for us to get (as you well know), and I hate separating eggs and storing random whites in my refrigerator, so this is how I'll do it from now on.

Long version: Cubby had a sore throat, so I made him some potato soup for dinner. He was feeling better by dinner, though, and also ate two drumsticks.

I meant the chicken to be for Charlie and Jack. Charlie ate three drumsticks. Jack ate one, then two servings of soup and two of broccoli.

I just never do know who is going to eat what, and in what quantity. Good thing I made the whole package of drumsticks, because they were all eaten.

This was the night that we got the official notice of a three-week cancellation for all K-12 schools in New Mexico. The boys have always wanted to try homeschooling. Here's their chance. I suspect it's not going to be as much fun as they think it will.


Yesterday afternoon, I was cooking at the stove--as usual--and A. was in the kitchen with me, discussing how and when we could get our van to the Chevy dealership to have what seems to be a worrisome transmission issue looked at.

The nearest Chevy dealership is over a hundred miles away*, and this is likely going to be a very costly fix if it can be fixed at all. This was a Very Not Fun Adult Conversation.

Meanwhile, Poppy was humming an unrecognizable song and running at full speed from the stove to the dining room, stopping to give me quick updates whenever she reached me. So A. would be talking about buying new tires for the van and then . . ."Mommy, I singin'!"

A.: "But if they tell me the transmission only has another ten thousand miles, then we'll just get a set of used tires and run it until it dies."

Poppy: "It's a song about snowflakes!"

Poppy: "The snowflakes comin' down!"

A.: "And then there's so many computer sensor issues, it's hard to decide which of them to fix."

A.: "I hate going to dealerships/cost of driving these days/can't keep a car on the road, etc."

I know, my sweet. And thank God for that.

* The whoooole happy family is going this morning. Happy Spring Break, kids! Let's drive 250 miles in one day to do something not at all fun! (Pray for us.)