Friday Food: All Hail the Grill

Unlike a chicken breast however, the breast on a home-raised lamb is pretty thin. It's pretty much a thin layer of muscle sandwiched between skin and fat.

It is not an appealing cut of lamb unless you really, really like lamb. And know how to cook it.

A. prepared it the same way he prepares the ribs: He marinated it in olive oil, garlic, and a lot of vinegar, then cooked it slowly in the oven covered for a couple of hours before transferring it to the grill to get crispy.

The boys LOVED it. They ate most of it themselves. I even gave a piece to Poppy to chew on (is it still chewing with only one tooth?), and it kept her happy and quiet for the entire meal. It also made her a bit greasy, but oh well.

I also had A. cook the last teeny beef bottom round "roast" from our half cow on the grill for me. It was literally three inches long. I didn't know a roast could be that small. It was just the right size for my salad, though, which was good because I don't eat lamb lap. Much like I don't eat lamb ribs.

Cave Mother would not have survived long in cave times.

The salad was exciting again because it had some of the MiL's spinach, some of her radishes, and some of her green onions. Garden produce makes me feel that cooking and eating are worthwhile again. Insert sigh of happiness here, along with frustration that I'm not growing a garden this year thanks to our imminent cross-country move. Boo.

Long version: Yeah, I pretty much just switched out the meat and made all the same stuff from the night before. This was the only night I didn't use the grill. It was storming. Plus, I often have trouble with hamburgers kind of falling through the grill grates. Maybe I need to be more aggressive when pressing the meat into patties.

Hey, is there anyone out there who doesn't know the easiest way to make a vinaigrette? I didn't before I learned from the MiL (mostly because I had never made any kind of homemade salad dressing). The traditional method is to put all ingredients except the oil in a bowl and then whisk the oil in slowly to emulsify the dressing. This is not happening--like, ever--in my kitchen.

The easy way to do it is to put all the ingredients including the oil in a jar with a screw-top lid on tight and shake the hell out of it before you pour it on the salad. Even easier? Get a kid to shake it for you. Just make sure the lid is on really, really tight for that.

Long version: We ran out of propane for the grill on Friday and I wasn't going to bother getting a replacement canister as we're moving in a month. However, the canisters are only ten dollars, and I decided after eating the grilled ribs that that is totally worthwhile for another month's worth of meals. Everything tastes better when cooked on a grill.

The potato salad is this one. I no longer have a copy of Mastering the Art of French Cooking--it was the MiL's--so I just made up the dressing based on sketchy memory. I should have made more dressing, because the potatoes absorbed it all and were a little dry. I also should have looked at my post about it before I made it, because then I would have remembered to add bacon, which is always the right thing to do.

Long version: The MiL arrived this day for a short visit. She brought some asparagus from her garden, which I promptly dumped on the grill with the meat. Definitely the highlight of the meal for me.

She also brought another five bunches of enormous rhubarb, from which I made three quarts of stewed rhubarb. The boys got to have a peanut butter cookie AND stewed rhubarb with cream. That would be their highlight.

Random photo break, all the way back to December: 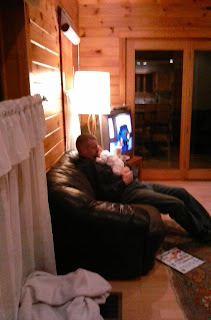 Would you look at that tiny grub? (Poppy, that is, not A.)

Long version: When I went to the grocery store last Friday, I had all four kids with me. This meant it was 30 minutes of, "Can we get ____?" from all directions. The only things I said yes to were the fresh pineapple for Charlie and the hot dogs for Cubby. I asked if I should make buns, like I did for our Easter cheeseburgers, but Cubby was firm in wanting the store-bought buns. Considering how often we have hot dogs (perhaps twice a year), I was fine with that.

Charlie won't eat hot dogs, but likes the buns and ketchup, so I chopped up some of the leftover London broil to go in his bun.

I don't like hot dogs, either. I had a salad.

Long version: I was the only one who had radish greens, which I made from the, um, greens of the radishes the MiL brought me. No one else likes them. More for me!

Long version: Our landlady's grill has three tiers, the top two of which fold back into the grill when the top is closed. Food must be kept on the top tiers if one does not wish to incinerate one's food, but you know what happens when sausages are on moving grill grates? They roll off. I had to barricade the sausages on there with the peppers and onions. Tricky.

The dinner rolls were storebought ones the MiL had brought with her. They were some kind of sprouted whole grain variety. Charlie liked them. Jack only ate half of his. Cubby probably would have eaten the whole bag if he had been feeling well enough to eat anything other than a single hardboiled egg.

A Light in the Dark


I was up most of last night because only one of my children managed to sleep through the night. The other three were up at various times due to nursing needs, blanket issues, and illness.

As I was sitting on the couch at 3:15 a.m. waiting on the ill child to come out of the bathroom (again), I saw a tiny light moving around outside in the brush. It was a firefly*.

I love fireflies, but rarely see them as the dark hours in the summer coincide with my sleep hours. But this night, I wasn't sleeping, so I saw the lone firefly that had emerged too early in the unseasonable heat. There weren't any other fireflies to respond to its flashing, though, which was kind of sad.

Or maybe anything seems sad when you're sitting on a couch awake in the wee hours.

* A poll: Do you call them lightning bugs or fireflies?

Labels: all about me, randomness, wildlife

***It's Memorial Day. Please take your moment before carrying on with your day.***
(Okay. Onward.)

Fun fact about me: I am the only one of my siblings who has never completed a 100+-mile bike race.

Both my older brother and sister did El Tour de Tucson with my dad when they were in high school. I remember this as a lot of early morning training rides where they would return red-faced, dying of thirst, and walking funny from hours on a bike seat.

I can't imagine why I wasn't inspired to follow their example.

I'm sure it was a big disappointment to my dad that I stubbornly resisted the opportunity to challenge myself and achieve a big goal and all those other good things that come with doing something insane like a 109-mile bike ride. But I did not like riding a bike, so I didn't. The last time I sat on a bicycle was at least 20 years ago.

A. was feeling sick again; Jack and Poppy were asleep; and Cubby and Charlie were bouncing off the walls. Usually I take them on a walk when I want to get them out the door, but Bug Season is in full force, and they're particularly bad on the sheltered dirt road where we go. Anywhere without a pretty strong breeze is Black-Fly Heaven. So instead I took them on a bike ride, because then we could create our own breeze.

I rode A.'s bike, which certainly was not designed for an average-height woman, but worked fine for the purpose.

Guess what? You really don't ever forget how. Sure, I had a bit of a wobbly start getting going, and I did turn too wide at the end of the road and plow into the grass, but those were minor considering my lack of practice. Cubby found my lack of skill hilarious.  "You ride like me, Mommy!"

It was--dare I say it?--kind of fun. Even on a bike that definitely didn't fit me (I had to lean forward on my hands a lot because the frame is too big for me, and holy hell, that is the MOST uncomfortable seat EVER), I enjoyed going faster than walking speed and outrunning the bugs.*

I think I might have to get my own bike for rides with the kids in the future. Much like my return to hiking after having children, bike riding seems to have come back into my life.

I'm sure my dad is pleased. But I'm still not going to sit on the bike for 109 miles, Dad, sorry.

*  Except for when we had to stop at their grapevine fort on the side of the road so they could decorate their bikes with ferns and throw themselves down the bank over and over. And when we stopped so they could pick the long grasses and chew on the stems. I got eaten alive then, but that's par for the course with little kids. They never just go from Point A to Point B.