The Serpent in the Garden


Jack had a very scary encounter with a snake last night. Scary because this snake was not small; it was not a harmless garter snake; and it was not hiding quietly in the green beans.

Last night after dinner, A. and Jack went outside to continue work on a stone wall A. is building adjoining the patio. Jack ran out first onto the patio and stepped right over a rattlesnake. On the patio. Eight feet from the door. Directly in the path we always take to go into the back pasture.

The snake was probably there because the sky had clouded over and it was seeking the warmth of the stones that had absorbed the sun's heat. It didn't rattle or, thank God, strike as Jack ran over it, though it did coil up.

A. was right behind Jack, saw the snake just as Jack ran over it, and yelled out that there was a rattlesnake and GET AWAY. Jack veered right off into the driveway and ran a safe distance away. The snake had still not moved.

It was a pretty big rattlesnake--about two feet long--so A., rather than use a hoe or a shovel or anything that required him to get within a handle's length of the snake, got his gun and shot it in the head.

All of the other children of course joined in at this point in the proceedings to observe the snake and hear all the details of the encounter. Charlie, being Charlie, requested the rattle. A. got out the hatchet to cut off the rattle, but took the precaution first of cleanly cutting off the head and throwing it over the fence.

And still, five minutes after its head was blown off, when A. went to cut off the rattle, the snake's body tried to strike A. WITHOUT ITS HEAD.

Charlie got his rattle, no one got a snake bite, and Jack's guardian angel should get a promotion and a pay raise.

The end, and three cheers for a happy ending.

Long version: We tagged along with A. when he went to a city to pick up a big copy job for work. This was the most exciting part of the trip for the children: 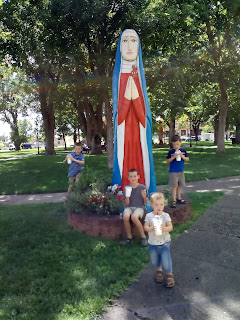 Italian sodas in the historic plaza, under the melancholy gaze of Nuestra Senora de los Dolores (Our Lady of Sorrows.) No sorrow from the kids about the Italian sodas. I hadn't had one in years, but they're just as good as I remembered.

We didn't get home until just after 6 p.m. with many groceries to be unloaded from the van and put away. I knew we were going to be gone until dinnertime, so in the morning I cut some chunks off a big sirloin roast I had taken out of the freezer for A. to make jerky, simmered the chunks with onion, garlic, tomato juice, cumin, and chili powder until they were tender, then put that in the refrigerator.

When I got home, I reheated the meat, added the rice left over from the night before, stirred in some grated cheddar cheese, and served it up.

This is the time of year that the roadside stand goes up in this city with produce from Colorado. I got peaches, corn on the cob, and a watermelon (with seeds, of course). The corn I shucked and wrapped in a wet towel to microwave it. This is a good trick to know when you don't have time to boil a big pot of water. Or don't want to heat your kitchen by boiling a big pot of water. The children were thrilled to have corn on the cob.

Long version: As is my habit these days, I cooked the pork in the morning, pulled it apart, and stuck it in the refrigerator to re-heat at dinnertime, with some barbecue sauce. Cubby was very happy. He tells me that pulled pork sandwiches are his favorite kind of sandwich. They are awfully good.

This was the watermelon we got at the roadside stand in the city, and it was the best watermelon we've had so far this summer.

Long version: The children ate the sandwiches and carrot sticks, A. and I ate eggs and peppers and onions, and everyone except Jack ate the peaches and cream. He lost his dessert because of an unfortunate incident with a can of spray paint he was using as a weapon against his brothers. Luckily, he didn't actually manage to hit anyone, but he still had to punished.

The peaches, like the watermelon, were exceptionally good. Of course, pretty much all fruit is improved by peeling it and adding sugar and cream. But even completely unadorned, as I ate mine, the peaches were sweet and delicious. Way to go, Colorado.

Long version: I made the meatballs and sauce in the morning (of course), but I only used a partial can of opened tomatoes in the refrigerator to make the sauce, so there was only enough for the meatballs.

The kids are the only ones eating the pasta, anyway and they're just as happy to have it with just butter, garlic powder, pepper, and Parmesan cheese, so it all worked out.

When I went out to pick the green beans, I was startled by the re-appearance of the resident green bean snake, who I hadn't seen in a few days and was hoping had re-located. I mean, I'm pretty sure it's a harmless snake, but even non-venomous snakes can bite. I keep a very wary eye on it and don't pick anything in its vicinity. 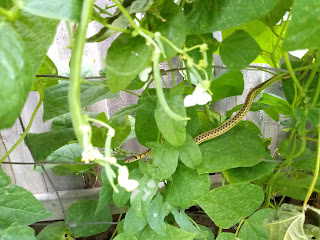 If this is some kind of viper rather than a garter snake, someone please tell me.

Long version: Hey look, a whole meal that I did not make in the morning! Which is why my kitchen was 85 degrees when we sat down to eat.

The children ate the two ears of corn I still had left--and every single child except Poppy complained that they were only getting half an ear--A. ate some cucumber, and I ate some fried cabbage. The vegetable letter of the day was apparently "c."

Long version: A storm conveniently blew in just as I was cranking up the oven to cook the bread and vegetables, blessedly lowering the temperature in the house by several degrees. Hooray.

Long version: Can you guess when I made this long-cooking meal? Lemme give you a hint: starts with an "a," ends with an "m," and has two periods.

Poppy and the Chickens


Like most toddlers, Poppy is a big fan of routines. Particularly if it's a routine that she knows well enough to dictate the steps. In her case lately, that means taking care of the chickens in the morning.

She wakes up before the sun, and before the chickens. But as soon as the sun starts to come up--around 6 a.m. these days--I tell her it's time to go let the chickens out and she heads straight to the door to put on her pink boots.* Then she goes to the refrigerator to get the container of chicken scraps and waits at the door until I open it for her.

After getting down the steps and into the enclosed porch, she leads the way to the shop, wherein lives the commercial chicken food. Once there, I fill the container of food for her, and we switch containers; she carries the commercial food and I carry the scraps.

I would rather it was the other way around, because the container of scraps has a lid on it and is therefore much less likely to spill all over if she falls over a rock or into a hole or whatever.

But she wants that open container of food, and she will have it, by God. 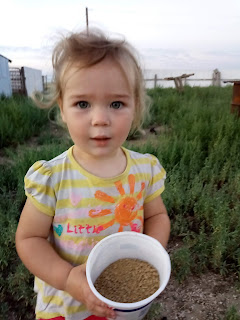 No one's telling THIS girl what she can and can't carry.

To be fair, in the two weeks or so that we've been doing this, she's only tripped and spilled the food once, which is pretty good for a kid who's not even two yet.

Once we get across the back pasture to the chicken coop, I open the outer door to the pen, and we both dump our food into the chickens' pan. 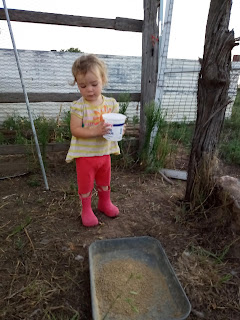 At which point she always announces, "Dump!" with great satisfaction as she suits the the action to the word.

Then she exits the pen and I open the door to the actual coop for the chicken rush. 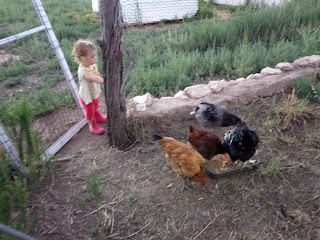 Best to stay out of the way of those birds when they're headed for food**.

As soon as the chickens are released and eating, she heads back to the shop, puts the container back in the bucket of commercial food, takes the empty scrap container from me, carries it inside to the kitchen, and puts it back on the counter, thus completing another successful morning of chicken care.

Pretty soon I bet I can just send her out on her own to do it.

* Which, incidentally, she can do all by herself. As the parent of any small child can tell you, this is pretty much the Holy Grail of children's shoes.

** Unfortunately, the gray chicken formerly known as Lucy appears to be more of a Lucius and will probably not be with us for long, because I have no interest in having two roosters.