A. was gone all week, leaving me to cook as best I could with three rampaging boys and a fussy baby on the kitchen floor. Everyone was fed. Sometimes that's all you can do, right?

Long version: I got nothin'. I guess the short version is the only version. Bet you never thought you'd see that, huh?

Long version: In the morning I put a still-frozen pork butt roast in the oven with a chunked-up onion to cook most of the day. This turned out to be very fortuitous as we decided last-minute to go to the late afternoon mass, so we didn't get home until almost 5 p.m. The pork was done, so I pulled it into chunks, mixed them up with mustard, maple syrup, and apple cider vinegar and crisped them up under the broiler.

After pouring the liquid out of the roasting pan, I mixed some leftover rice in with the remaining onions, added a little of the liquid back, and heated that in the oven with the pork.

The salad was made from red leaf lettuce, because A. had to go to a city on Friday to get toner for his printer, so he was able to buy some real lettuce for me. The excitement was palpable.

I don't get out much.

Except for me, of course. I had pork and various vegetables with rice, all the while coveting my children's sandwiches.

Remember this dip? I made that. The children were quite touchingly grateful to have a dip for their carrot sticks. Poor kids. They don't get out much, either.

Long version: Apparently, I am now a person who buys chicken at the store. I have not been that person for many years. And as soon as we can raise our own meat chickens, I will not be that person in the future.

I am so grossed out by grocery store chicken, and yet, I buy it. Maybe it wouldn't be so repellent if I didn't buy the leg quarters and then have to crack the joint and sever the drumsticks from the thighs? Maybe. But the boys like the drumsticks, and A. and I prefer the thighs. Plus, the leg quarters are the cheapest, and if I'm going to be buying nasty chicken, it's going to be the cheapest. The breast of those chickens had no better life than the legs.

I should probably come up with another way to cook it other than just roasting it in the oven with whatever else I'm roasting--these days, always sweet potatoes--but the kids haven't complained yet.

Long version: I purposely chose this meal because I knew I would not be into cooking and cleaning up this night. In the morning I took all four kids to the dentist (the toothless infant was there in a supportive capacity only, obviously) and after dinner I took them all to the village for two baseball practices in different locations at different times.

I was tired. I needed something quick to cook and quick to clean up so I wouldn't be faced with a dirty kitchen when I got home at 8 p.m. with three hyped-up boys and a hysterical baby. That was a good call.

I had leftover cabbage with diced deli ham and rice, which I shoveled into my face while scrambling eggs and nagging Charlie to find his baseball glove.

He didn't find it, but his practice was canceled anyway. And I found it the next day in an unexpected place, so at least I don't have to buy him a new one. I just love a happy ending. 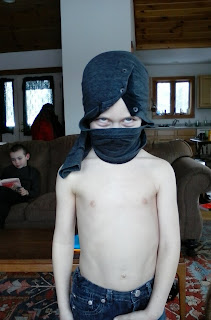 The Blue Ninja's archenemy, I presume.

Long version: What do I even say about this? I made tuna salad because it was over 80 degrees outside and all us northerners were melting. I was running low on bread, but uncharacteristically had potato chips. And, as we all know, chips are the best utensils. There were no complaints from the children.

They like to eat peas frozen while I'm making dinner, so I didn't bother cooking the peas. I just poured them on their plates still frozen. Hey, it was hot. Frozen peas made sense. Ahem.

And how about some ice cream to round out this carefully prepared and supremely healthy meal? Might as well.

I ate a random skillet thing with bacon, tuna, rice, shallots, and shredded carrots. And no ice cream. Boo.

Long version: Laziest garlic bread ever, I'm pretty sure. Thick slices from a loaf of sourdough slathered in butter and garlic powder, then under the broiler on both sides until brown. The boys loved it, and I really, really wanted to eat like five pieces myself.

When I made the mustard vinaigrette for the salad I accidentally added Worcestershire sauce instead of balsamic vinegar. They're both dark brown. And I am brain dead. I only added a little before the smell hit me and I realized my mistake. I continued making the dressing with the proper ingredients and couldn't taste the Worcestershire in the end.

Just thought I'm throw that PSA out there for anyone else who has a moment of mental failure and accidentally uses Worcestershire sauce. It won't ruin the salad dressing.

Even though it was still just me and the kids at the table (I have mentioned before how much I enjoy this), it was a downright leisurely meal because Cubby's 6 p.m. baseball practice was canceled due to rain. Thank you, Mama N. I don't dare to hope that I might be so lucky with Charlie's practice tomorrow night, but there is a chance of thunderstorms. Crossing fingers for another weather event.


Charlie appeared at the top of the stairs this morning gasping.

"I held my breath all last night and while I was climbing the stairs."

"So I'll be ready if I ever climb Mt. Everest."