The relationship between Cubby and Charlie is . . . uneven. Sometimes Cubby loves Charlie and croons about how cute he is and gives him kisses. And sometimes he, uh, doesn't.

Okay, MOST of the time he doesn't. Most of the time, if we're to be honest here, there's an ongoing "very bad baby" chant (sometimes he also puts these three words to the tune of "Twinkle, Twinkle, Little Star"--a musical prodigy without doubt), run-by head squeezings, and purposefully knocking Charlie off his wobbly feet.

I think this is pretty normal for brothers, but what do I know? I only had one.

Anyway. The point is that any interaction between the two is apt to become a one-sided brawl within seconds. So I'm always apprehensive when Cubby gets within striking range.

Today when we were playing in the library, I looked over to see this: 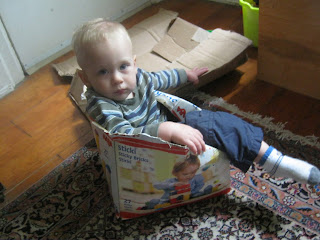 Charlie did not seem unduly concerned about his wedged position in the box. When Cubby noticed our overstuffed box, he ran over, yelling, "I'll help you, baby!"

And miraculously, he did. 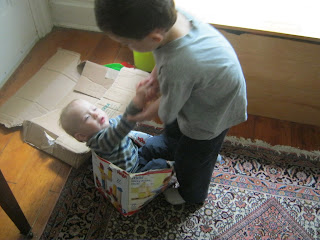 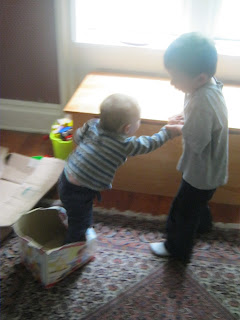 There may have been a tumble against the toy box there immediately following the rescue that resulted in a head-bonk for Charlie, but since he didn't cry and it was an accident, I ignored it.

It almost makes me forget the time yesterday when Cubby poured a rubber boot full of muddy rain water over Charlie's head and then chucked the boot at him.

Here He Goes Again on His Own*

Although "again" isn't really accurate, since Cubby has NEVER been on his own. He has never once in his three and a half years spent any appreciable time without his mother, father, or grandmother present.

Until today. When he started preschool.

It sounds more momentous than it is. He's only going two mornings a week, from 9 a.m. to noon. Not exactly like sending him off to boarding school. It's a tiny preschool in the village a mile from us. One of the teachers is a mother he knows from story hour at the library. He's related to one of the other eleven kids, and our friends Jodi and Alyssa's younger son goes too.

But still. He's asked several times in the past few days if I would stay at the school with him. If Charlie would be there. What if he gets lonely. That kind of thing.

And then I dropped him off this morning and he raced directly to the play toaster without a single backward glance.

Right. I'll just be going then.

When I returned three hours later, the kids were out on the playground. When Cubby saw me, he said he didn't want to go home and continued climbing on the jungle gym.

I asked the teacher how he did. She said he did great. If I may quote: "He reminded us all of some rules and was the line leader today." Which probably means he was maybe a little bossy and domineering. Neither of which surprises me.

Cubby will be Cubby wherever he goes. I just hope the rest of the world is ready for it.

* That title should, of course, remind you of this song, if you are as prone to 80s hairband sentimentality as I apparently am. It's really a wonderful video in the genre. The spectacular backlighting does a superb job of highlighting The Hair.
Posted by Kristin @ Going Country at 11:09 AM 4 comments:

The Summer of the Cucurbit

The tomatoes are on their way out. They have late-season blight. And thanks to all the rain we got early on, they didn't even set their fruits until late, so I don't even know if I'll have enough to do even one canner-load.

This is the third season running of sucking tomatoes. Maybe next year will make up for it. Maybe.

And in the meantime, how about some cucumbers and squash!

I've made two batches of refrigerator dills already (that's ten quarts total) and given my sister-in-law enough cucumbers to make a batch for herself. That's a lot of cucumbers.

But the cucumber plants are nothing in comparison to the freakish squash plants. There's a volunteer . . . something that came up in the compost. I think it sprouted from the seeds of a random squash Mr. Jason brought us. It's some heirloom kind that's the shape of a pumpkin and the color of a blue Hubbard. And the plant ate the entire east side of the garden. Seriously out of control.

But even THAT is nothing to the lone surviving butternut squash plant. I planted four butternut squash seeds. Only one came up. And thank God for that, because that one plant has 21 squashes on it. Twenty-one.