Long version: I counted this meal a win because I was totally going to punk out with tuna salad (83 degrees in the kitchen at 5 p.m.), but pulled myself together and made tuna patties instead.

I was going to fry the leftover potatoes, too, but my fortitude didn't extend to that.

Long version: Since I had a supply of bacon grease on hand, I decided to cook the green beans in that. Good call. Way better than boiling them in the microwave, which is what I usually do.

The antelope was two small roasts, browned in bacon fat, then pulled out, sliced, and returned to the pan with a cube of garlic scape pesto and some heavy cream. Such a good combination.

And for Lindsay, who wants to see what our weird game meats look like: 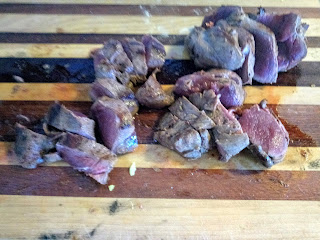 After browning and slicing, and before going back into the pan. 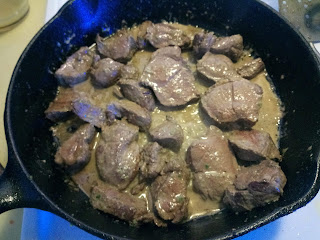 The finished (and not very photogenic) product. I should've artfully strewn some basil chiffonade over this for the photo, right?*

The potato salad was just boiled, chopped potatoes doused with vinegar, salt, and a very, very small amount of sugar. I have had literally sweet German potato salad before, which I consider unappealing in the extreme. I put in about two pinches of sugar.

I didn't want to cut into a whole onion for just the bit I would need for the potatoes, so I just used some roasted onions I already had in the refrigerator. Also bacon bits and extra bacon grease, of course, because of such things are a German potato salad made.

And the same green beans as the night before, because again, there was that handy bacon grease.

Have you ever wondered what three pounds of tuna might look like in a can? Well! Wonder no more! 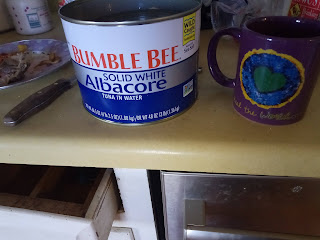 Before A. and Cubby went to see the MiL in New York, she asked me if there was anything she could send back with them. And I said (among other things), "Tuna."

See, I can't find the bigger, 12-ounce cans of solid white tuna in stores here, so I used to order it online by the case. Then came a global pandemic and panic buying, and just like that, tuna was pretty much no longer available online. It is, however, still available at stores in bigger cities, apparently. So the MiL bought one of these giant cans at BJs for me.

It's a lot of tuna. You're going to see it again for a few nights coming up.

Long version: What does one do when there are still two pounds of tuna in the refrigerator and it's 83 degrees in the kitchen? The answer is obvious. 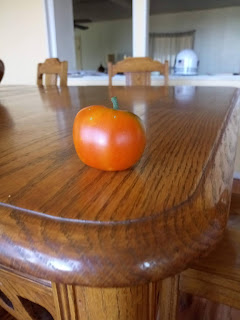 A little (very little) selfishness is a good thing sometimes.

Long version: We very, very rarely have pork chops, but A. found some boneless center-cut ones in the clearance section of the meat department last time he was at the grocery store. These I browned and cooked through, then removed to make a gravy with finely diced onion, milk, and cornstarch.

I oversalted it a bit, but it was still pretty good.

Short version: Pork slop for A., tuna salad sandwiches and frozen peas for the kids, salad for me

Long version: The MiL used to make a combination after Thanksgiving of leftover turkey and gravy served over mashed potatoes that she called Turkey Slop. I made a combination of leftover pork and gravy, but then I just mixed in leftover rice and some frozen peas. It was still pretty sloppy.

This meal probably would have finished up the giant can of tuna, but then when I was making the tuna salad, I overdid the mayonnaise and had to add another 12-ounce can of tuna to it so it wouldn't be so gloppy. And so now, there is more tuna salad in the refrigerator. Forever.

* Ha. That'll be the day. If you could see and hear what my kitchen is like right before dinner, you would know that I literally do not have time for that nonsense. Too busy yelling at kids to wash their hands and shaking clutching children off my legs while I dish up food.


At various times, I have considered buying a small wading pool for the children to play in. But you know what always stops me?

Those things are nothing but plastic, and I HATE plastic. So why would I saddle myself with a giant piece of plastic that I will eventually have to dispose of, probably sooner rather than later?

Luckily, they don't know what they're missing.

Also luckily, when presented with no ready-made accumulations of water, children are very capable of manufacturing one.

In Charlie's case, that meant digging out the dirt right underneath the drippy outdoor faucet while A. was watering to make a suitably muddy pool. 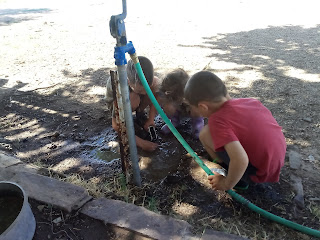 And no plastic in sight. Hooray.


We are inundated with squash plants this year. One of the things we learned last year is that squash is happy to grow here. This is sadly not the case with all vegetables (alas for the leeks), but squash can handle our climate. So we figured we should roll with that.

A. planted some saved squash seeds* back in January as an experiment to see if they would perform like a volunteer and come up early. They did.

Then I planted half a dozen out in the pasture.

And we have at least three volunteers in the back garden where we had many volunteers come up last year thanks to an old compost pile. 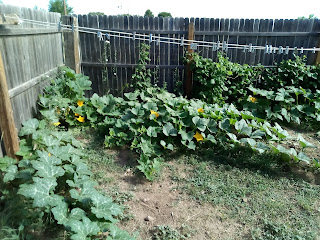 Last year's volunteer squash that ate the back yard. (It got even bigger than this in the end.)

All together, I'd say we have at least 14 squash plants. And as everyone knows, squash plants are very, very prolific. It is not unusual to get half a dozen squash on one plant. So 14 plants times 6 squash per plant is . . .

Well, it's a LOT of squash. Way more than I would be able to eat as winter squash in one season. Or even give away, I suspect.

At least a couple of our plants are from seeds we saved from Rafael's calabaza that he gave us last year. We know, thanks to Rafael, those are calabazas when allowed to ripen fully on the vine, at which point they are a hard-skinned winter squash. But they are calabacitas when harvested at an immature stage in the summer, in which form they are cooked like zucchini.

None of the calabacitas have appeared on those plants yet, but it made me think: If the calabaza can be eaten at an immature stage, why not other winter squash? Like, say, the unidentifiable volunteer in the middle of my tomato plants that already has two baseball-sized squash on it?

So I pulled those two squash off, chopped them up, and sauteed them in olive oil.

I had to remove some of the seed part, because even the immature seeds in a winter squash are fairly big at an early stage, and I think this would only work when the skins are still thin and tender enough to be easily poked with a fingernail, but still. Early garden vegetables from a plant that I have not had to tend, and a way to use some of the avalanche of squash before it smothers us this fall.

Garden victory is mine. At least, when it comes to the squash.

* Every single one of the seeds we saved from various varieties last year and planted this year germinated. I purchased exactly one packet of squash seeds this year--Delicata--and of the six seeds I planted, only ONE germinated. So annoying.

Yeah, he doesn't get to claim them anymore, because after planting the seeds, he pretty much lost interest.

So would you like to see my and A.'s Megaton cabbage? 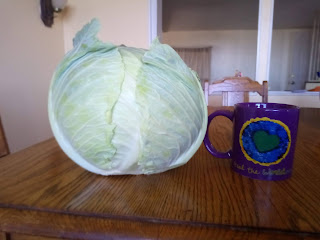 The mug I put in there for scale is a free one from Penzeys Spices that says "Heal the world . . . make dinner tonight." It's gonna take a lot more than cooking dinner to heal the world these days.

Full disclosure: That's the biggest of the nine cabbages we grew. It's pretty big, though. It's just a hair over five pounds and yes, I weighed it.

Even though that's a big cabbage, it is definitely not as big as the Megaton was advertised to get. However, given our hellishly hot and windy spring and summer, I'm happy to have anything that just survived, much less produced usable vegetables.

We've given away four cabbages already, leaving four still in the garden, which means we actually have about fifteen pounds of cabbage on hand.

It's been awhile since I've used my kraut crock, but it looks like this is the year.