Friday Food: So Much Tame Meat

Long version: When I took out some of the Sysco ground beef from the chest freezer, I grabbed a container of frozen chicken stock, too. It was cool enough for soup, so I made Miss Amelia's green chili soup.

All it is is the ground beef and chicken stock plus onion, garlic, celery, carrots, and potatoes. And the roasted green chili of course. We have a LOT of green chilis now, because we still had a cup or so of the ones we roasted and froze last fall, and then Miss Amelia has now given me probably four more cups of ones she roasted and froze.

Fine with me. Soup season will be upon us before you know it, and everyone likes this soup.
Random photo break! 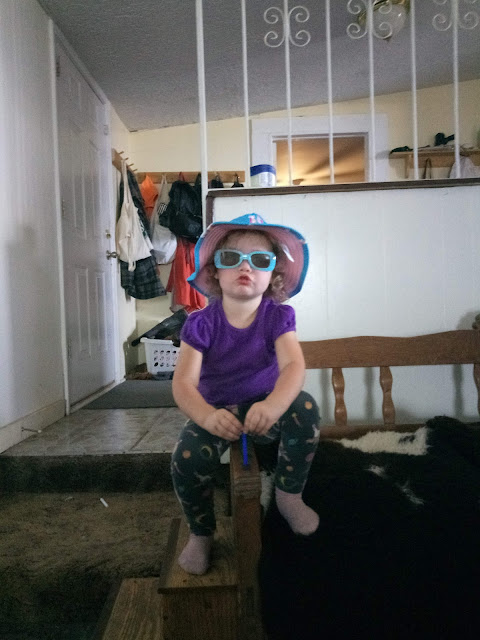 I'm not entirely sure what was happening here. She said something about loading cattle, so maybe these are her cowgirl duds?
Saturday

Long version: I didn't really intend on making doubles of proteins, starches, and vegetables, but that's what happened. And that meant double the pots and pans to wash. Downer.

Long version: I cooked the brisket overnight in the oven again. It's the only way to do it in the summer without getting the kitchen to sauna conditions by dinnertime.

Cubby chose the shortbread for our Sunday dessert. "It only has three ingredients! It'll be so easy!" he said.

I've made this recipe before, and it was as I remembered it: Sort of dry and difficult to roll out. I added some extra butter and then, after a first failed attempt at rolling, a couple of tablespoons of water. Cubby was very pleased with how it came out, though, and it is nice to have a dessert that can be made with ingredients we always have. Plus, very little sugar.

Long version: I had just a few of the sirloin chops left, which are pretty lean, so I cut them up for stir-fry. The vegetables were mostly carrots and frozen green beans, although I did throw in a few banana peppers from the garden.

These carrots Cubby harvested from the garden for me did not go into the stir-fry: 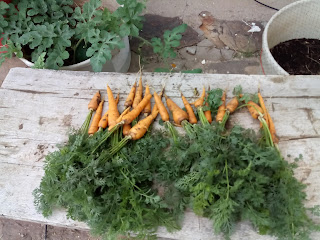 Because the locust-children devoured them shortly after harvest.

Tuesday
Short version: Italian sliders, pasta with Finny's sauce, green salad with ranch dressing
Long version: Italian sliders are small hamburgers with meatball seasonings. The ground beef came from a friend of mine. After hearing me complain about how gross ground beef from the store is*, she just up and gave me four pounds of the ground beef they get as part of her husband's compensation as a ranch manager.
Benefit of living in cattle country.
I gave her some green beans and promised her some sauerkraut when it was done sauering, which seemed to please her, so we were both happy.
Wednesday
Short version: Bunless hamburgers, leftover pasta, frozen green peas
Long version: Dinners are never very complicated on days when we take a trip to the Outside World. It's very tiring to spend three hours running errands with three hours driving thrown in, too.
I had just enough of the good ground beef left to make a hamburger for each of us, and then A. finished the leftover brisket.
Thursday
Short version: Pork chops, rice, sauteed green beans, sauerkraut
Long version: I canned another batch of sauerkraut and saved some to have with our pork chops. Pork and sauerkraut is just so good. Good thing we had all those Megatons. We should have some mega sauerkraut this winter, which I'm sure will come in very handy.
Okay, your turn! What'd you eat this week?
* I know. You'd want to be my friend, too, I'm sure.
Posted by Kristin @ Going Country at 4:30 AM 5 comments:

Several years ago, A. and I watched a documentary about cowboys in Texas. I think it was cowboys. At any rate, it was definitely about people living in rural Texas.
I've obviously forgotten almost everything about that documentary except this young guy who said he could never live in a city, because (cue heeeeaavy Texas drawl), "All them lights."
It has become a running joke between A. and me. We say it a lot. And we have a lot of opportunity to say it, given the fact that we live somewhere with almost no outside lights for miles.
In fact, yesterday was the first time in five months that I've seen a traffic light.
Does that seem impossible to you? Yeah. It was kind of surprising to me too when I realized it, but it's definitely true.
See, there are no traffic lights in our county, and, due to the world's descent into craziness, I have not left our county since March. A. has been our designated Outside World representative all that time, since I really had no desire to drive 90 miles just to make my children wear masks and fail to distance themselves from other people.
So we haven't left the county. And honestly, I didn't think much about it until yesterday when we drove to one of the tiny cities so Charlie could get a vaccination for school.
Everyone else came, too. My plan was for A. to watch the kids at the park while they ate their picnic lunch and I went to the grocery store.
And that is how I found myself driving in actual traffic with actual lights for the first time in half a year.
It took me an hour and a half to get through my shopping--mostly due to the quantity of food I buy at one time--and we discovered that's about the amount of time the children actually want to stay at a playground. We never let them stay that long, so we didn't know that's when they finally reach playground satiety, but they were ready to get in the car by the time I got back to them.
I was ready to get in the car and come home, too. All them lights, you know.
Posted by Kristin @ Going Country at 5:44 AM 7 comments:

Labels: all about me, country wisdom, travelin'

How Does My Garden Grow


Does it seem like all I ever write about is food? Yeah, pretty much.

I used to write more about where my food came from, in the form of somewhat frequent garden updates. I sort of got out of the habit of bringing my camera outside to document the growing things, though. But really, is there anything more entertaining than looking at other people's weedy gardens?*

Of course not. So I took my camera outside to give you a (partial) pictorial tour of our sprawling gardens. Let's go! 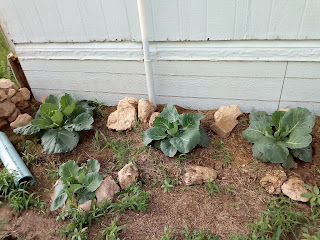 The second round of Megaton cabbages are just starting to make heads, nestled in their bed against the house, where they get slightly less sun and slightly more water from roof run-off. 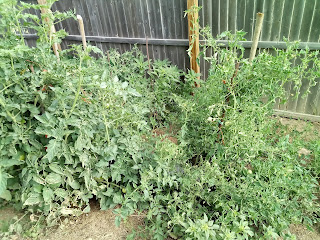 The tomato plants got WAY BIGGER than I expected this year. Much bigger than last year, which means I didn't put in big-enough supports to tie them to. There are a LOT of tomatoes on those nine plants and I am so excited for a glut of tomatoes in a few weeks. Barring any catastrophic hail storms, which is a definite possibility here. 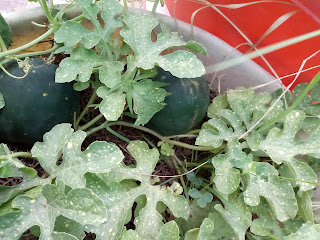 After a complete failure transplanting the Moon and Stars watermelons we started indoors, A. put the rest of the seeds in containers against the house, and now we have three fairly large watermelons growing in there. These siblings might have to get moved apart somehow as they get bigger. 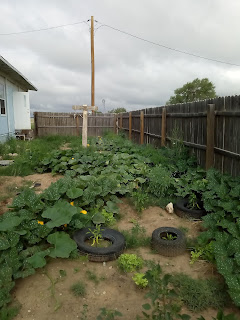 This is the backyard garden. The tomato plants are to the right of where I'm standing, and the cabbages are to the left. In those classy tires are some banana peppers A. bought from a nursery. There are a few lettuces among the peppers, and the various kinds of winter squash are, of course, taking over everything. Next year I am NOT putting ANY squash back here. 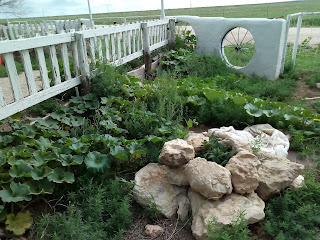 Another planting of winter squash. A. stuck these seeds in the ground against that wall in January, just to see what would happen. You can see what happened. Squash really likes it here. There's also a fig tree in that circle of rocks that has about half a dozen figs on it. 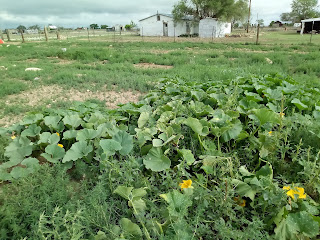 Why, is that more squash? YES, YES IT IS. We put these in to see if squash would grow in our back pasture, where there is no shelter from the brutal sun and wind. And the squash said, "BRING IT ON."

There are some more things I didn't take pictures of: basil, green beans, carrots, asparagus, a volunteer watermelon in the backyard that A. is very enthused about.

And! We just pulled out the old Megaton plantation to make way for new beds of carrots, snow peas, sprouting broccoli, and collards for the fall. We hope.

I might have to bring the camera out again for Round Two. Get excited.

*It's actually probably more entertaining to look at those perfectly mulched and mostly weed-free gardens, but much more relatable to see people growing food in the midst of the encroaching weeds. And I am nothing if not relatable, right? Right.