A little while ago when we were all clustered around the woodstove absorbing its blessed radiant heat, I heard a um, suspicious noise from Cubby.

"Cubby," I said, "Do you need to go to the bathroom? Because it sounded like you just tooted."

And much hilarity ensued.
Posted by Kristin @ Going Country at 5:12 PM No comments: 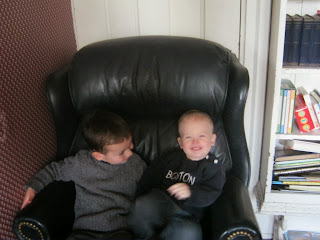 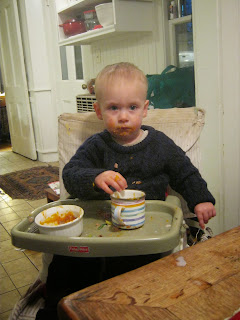 The Kraut Is On

Or maybe that should be "in." Whatever, I spent some time yesterday shredding and salting those enormous cabbages the MiL brought me and then stuffing the resultant weeping shreds into a gallon jar to start the process of controlled decomposition.

It sounds so appetizing, doesn't it?

Oh, but it is. Homemade sauerkraut is so, SO much better than anything you can buy, even the "fresh" stuff in bags. Do not even speak to me of the canned atrocity.

Sauerkraut is one of A.'s favorite vegetables--along with leeks, of which we also have a large supply--and he asked me somewhat longingly the other day while looking at the as-yet-unprocessed cabbages how long it takes sauerkraut to, uh, sauer.

Point taken, sauerkraut begun. With 200 pounds of pork in the freezer, sauerkraut is more or less mandatory. Pork chops and sauerkraut? Yeah. Bring it.
Posted by Kristin @ Going Country at 4:07 AM 6 comments:

Labels: all about me, fun with food, the A team

He Is Not Amused

Cubby came barreling down the stairs this morning yelling, "THERE'S ENOUGH SNOW TO PLAY IN!"

Indeed. Along with 19 degrees and a stiff wind. Not that that makes the slightest bit of difference to Grizzly Cubby. So I pulled on all of Cubby's many layers, all of my many layers, and then spent a really unpleasant, scream-y five minutes stuffing Charlie into HIS many layers.

After that good time, we went outside. And Charlie was all: 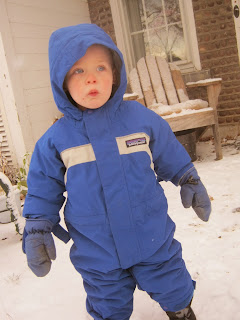 What the hell is this?

He just froze. Not in the literal sense, but rather in the sense that he would not take a single step unless I was holding on to him. After a few assisted steps, he decided that was enough and thereafter insisted on being held.

Not exactly the gleeful experience we were going for.

So he sat in my lap on the front porch for awhile: 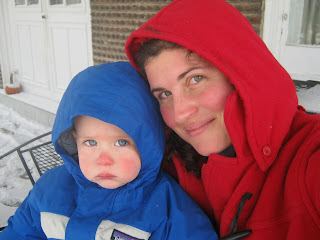 This is an eloquent face if ever there was one. 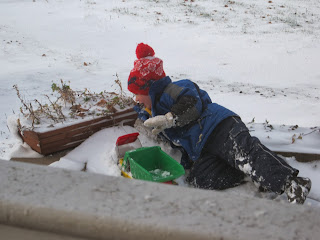 No snow sulks with this one.

Cubby tried to help Charlie play in the snow: 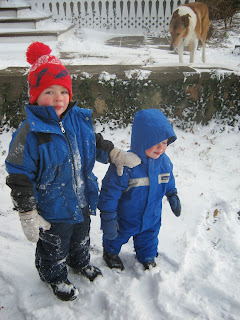 A nice, if rare, moment of brotherly love.

But Charlie was having none of it: 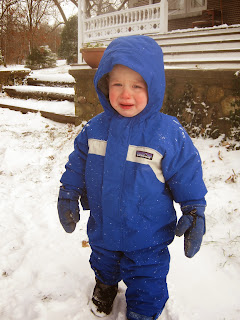 TAKE PITY ON ME.

About this time we gave up and went inside, much to Cubby's displeasure. Charlie's afternoon outing, however, was much different. No crying, some attempts to play despite his awkward trussing, and a return to his general good nature.

So we'll just chalk up his initial displeasure to a bad morning and carry on with the snow play. Good thing, because Cubby won't have it any other way.
Posted by Kristin @ Going Country at 5:02 PM 6 comments: