This guy. With the bonus of not being pregnant anymore. Can I get an AMEN, ALLELUIA, and HOORAY? Yes.

I also get a Cold Stone ice cream cake that I ordered myself online yesterday and that A. is even now picking up for me. It seems an unlikely thing to even have a Cold Stone Creamery in such a Small City, but it opened here a couple of years ago, allowing me to have the very same peanut butter ice cream cake I had last year at my parents' house in Tucson.

Miracles of the modern commercial age of chain restaurants nationwide, I suppose.

Feel free to eat some cake in my honor today, my lovelies. Or just because it's fun to eat cake. Whatever.
Posted by Kristin @ Going Country at 11:03 AM 6 comments:

Labels: all about me, Jack

Hooray for Jack, the voracious eater and champion pooper who is successfully fighting off jaundice! The first of my children to do so without medical intervention, incidentally. He wins the newborn prize.

Hooray also for A., who went to buy a new computer last night after work so I could post pictures for you. Because I know that you could do with fewer words and more photos. Me too. 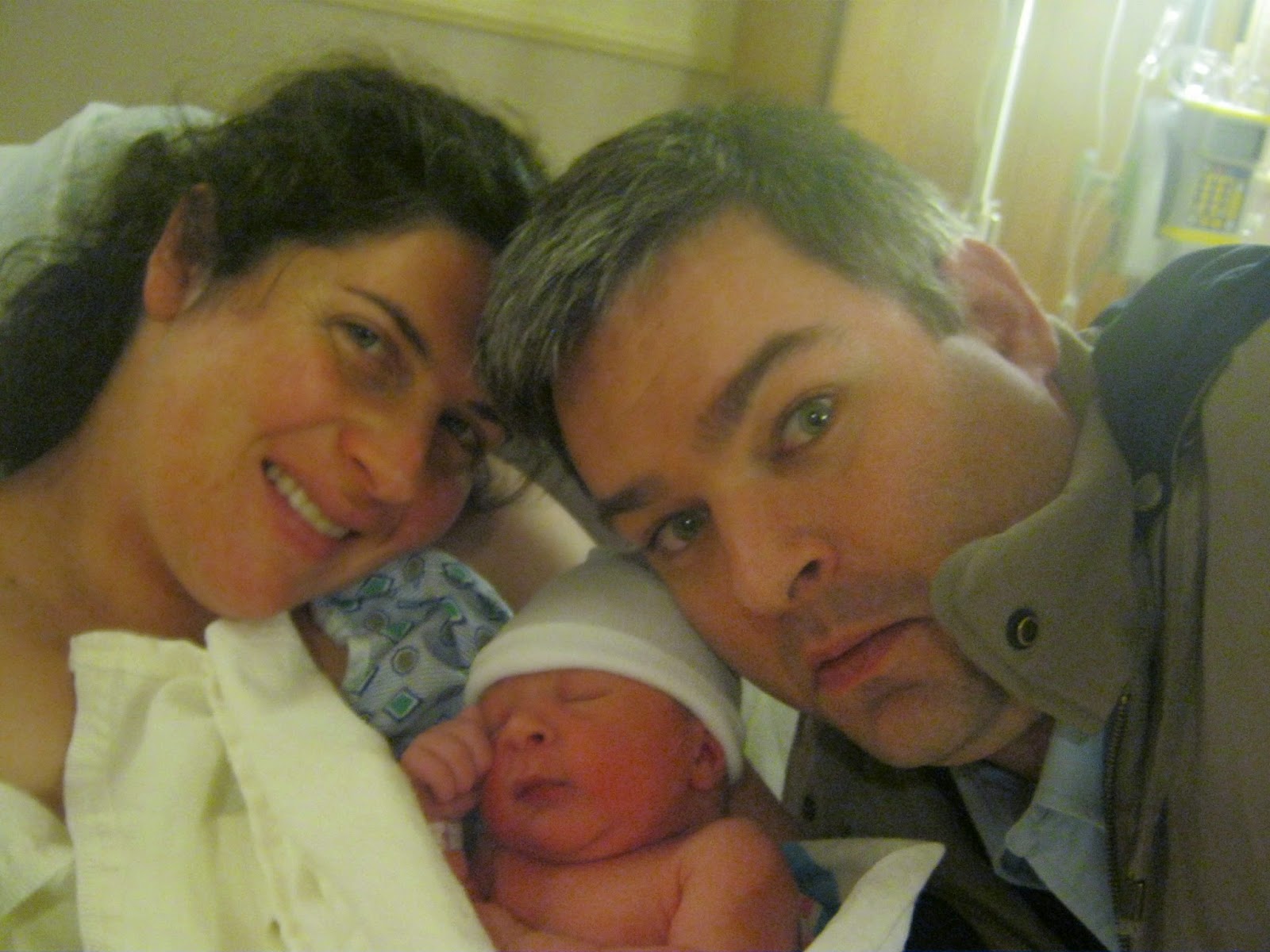 Immediately post-birth. I'm not sure what A. was expecting, but by the expression on his face, it doesn't appear he was expecting a baby. 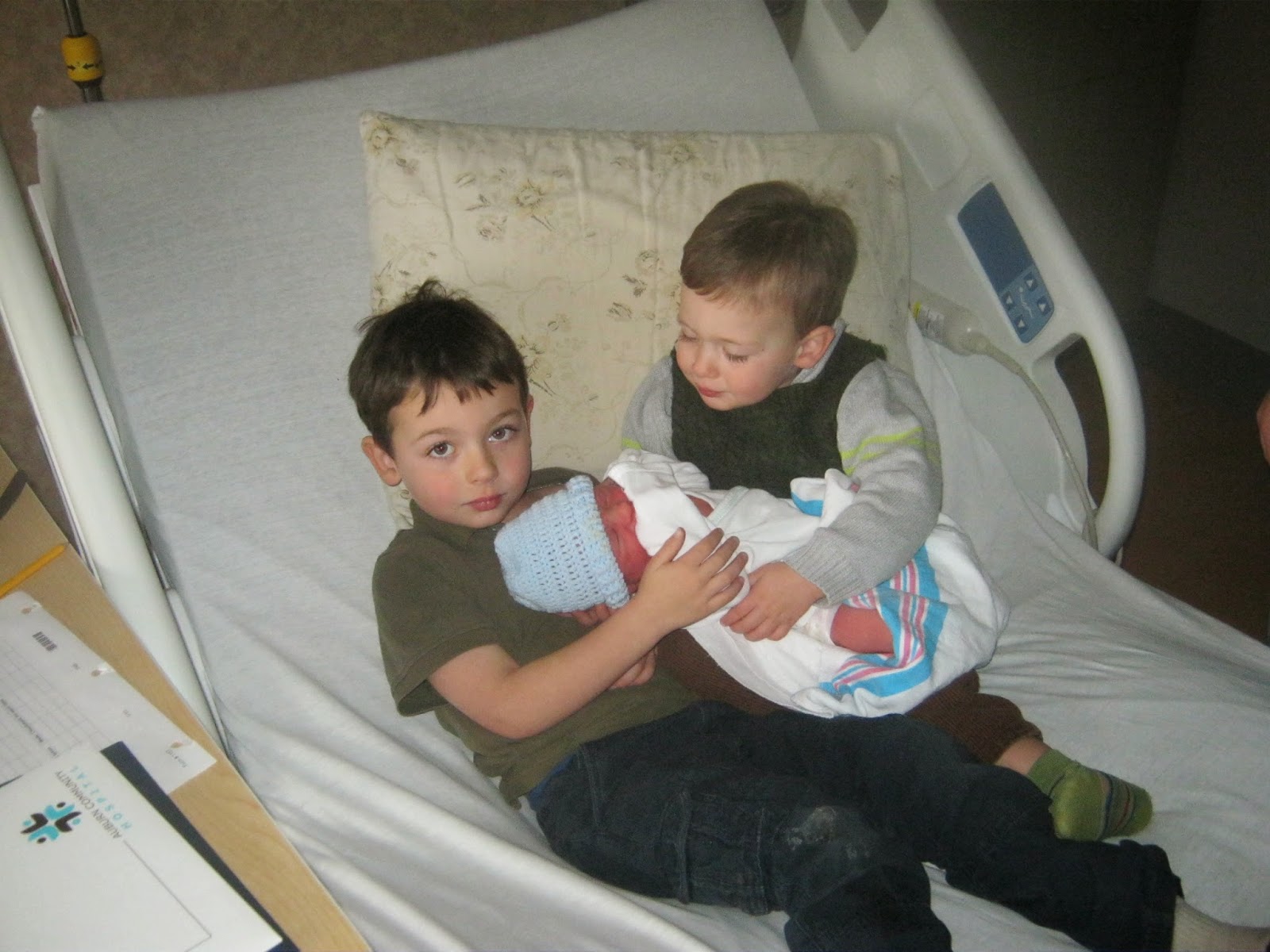 The first meeting of the band of brothers. 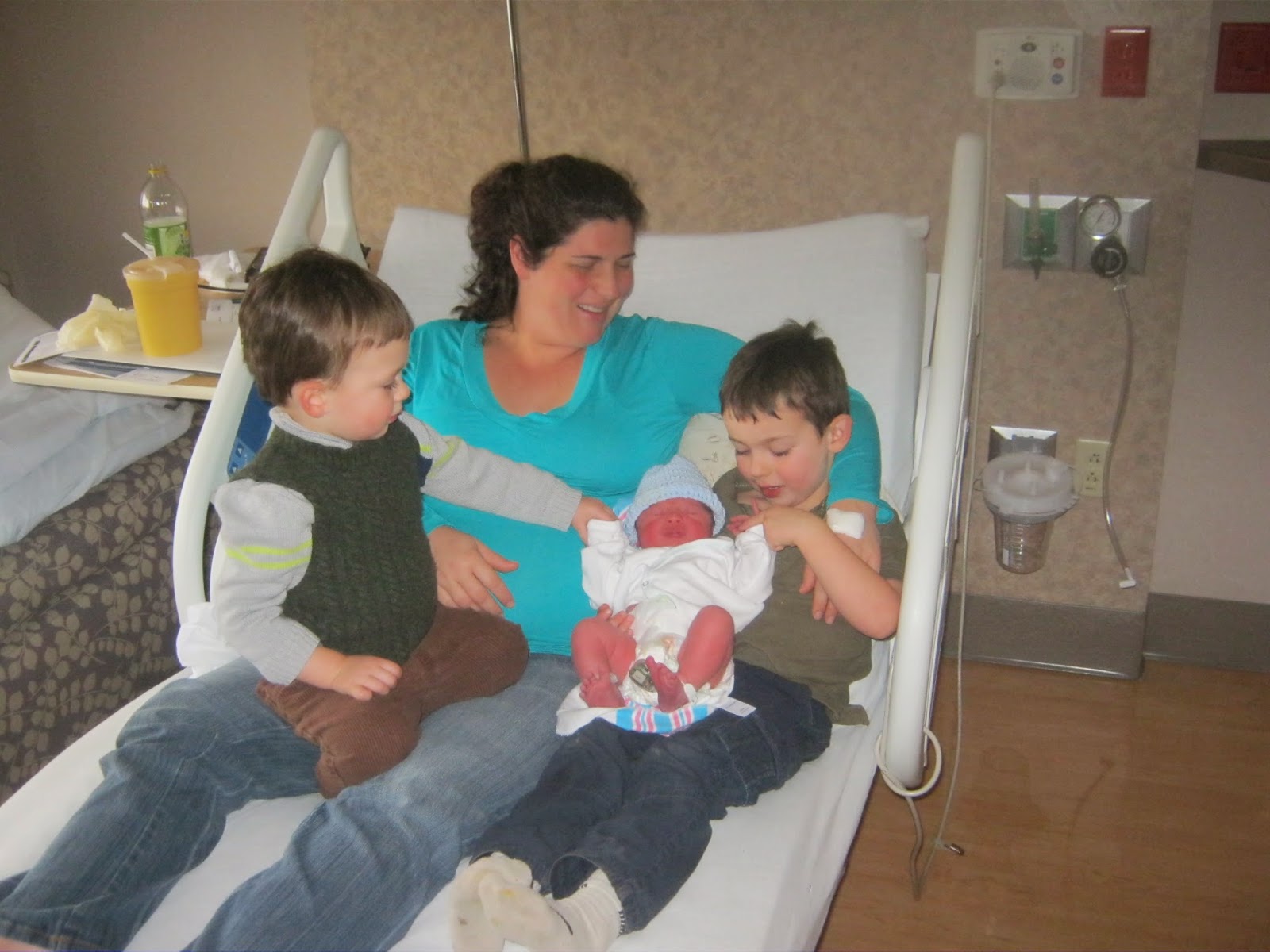 And their totally outnumbered mother. 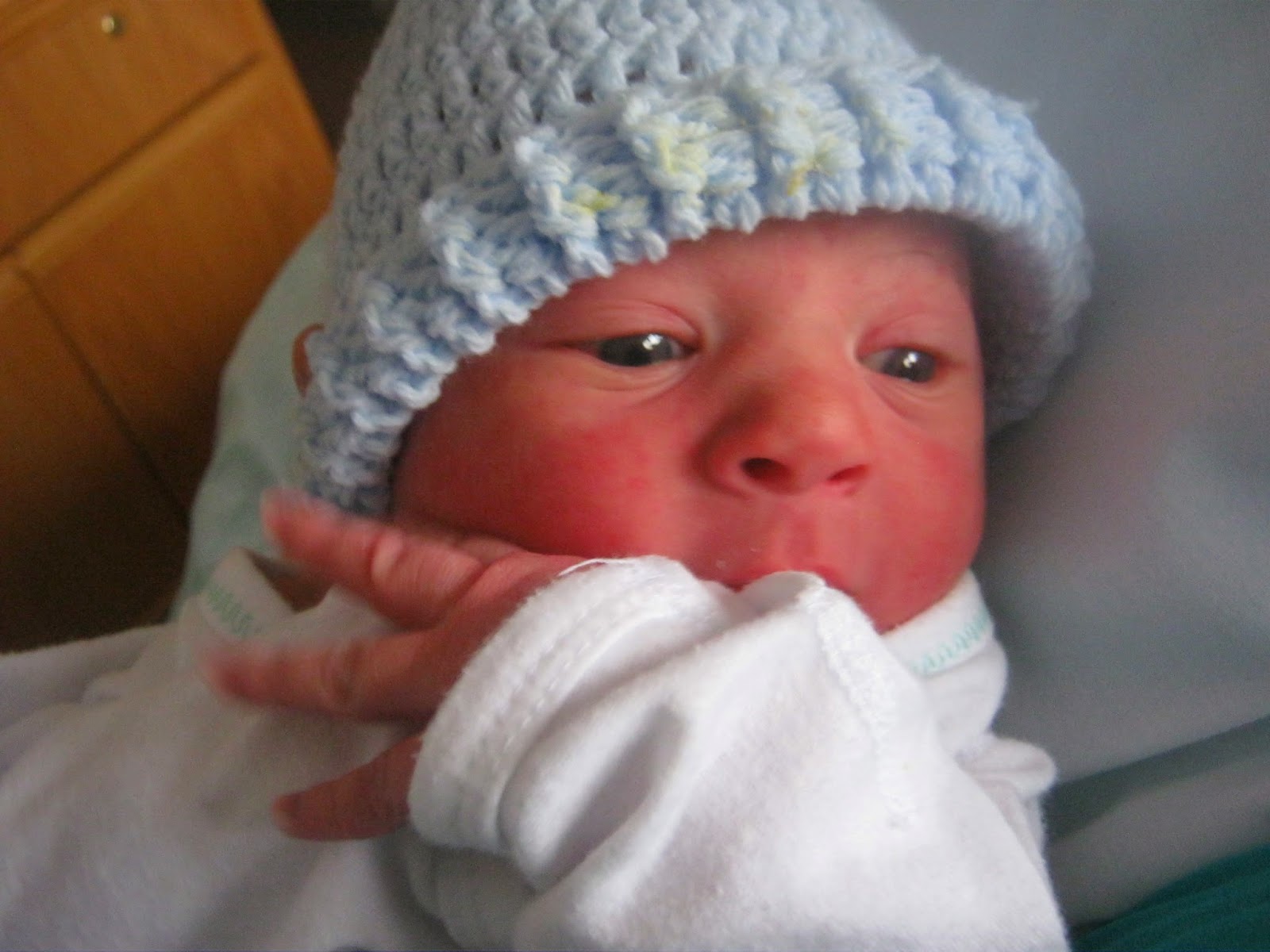 Eating his sleeve in the absence of milk. 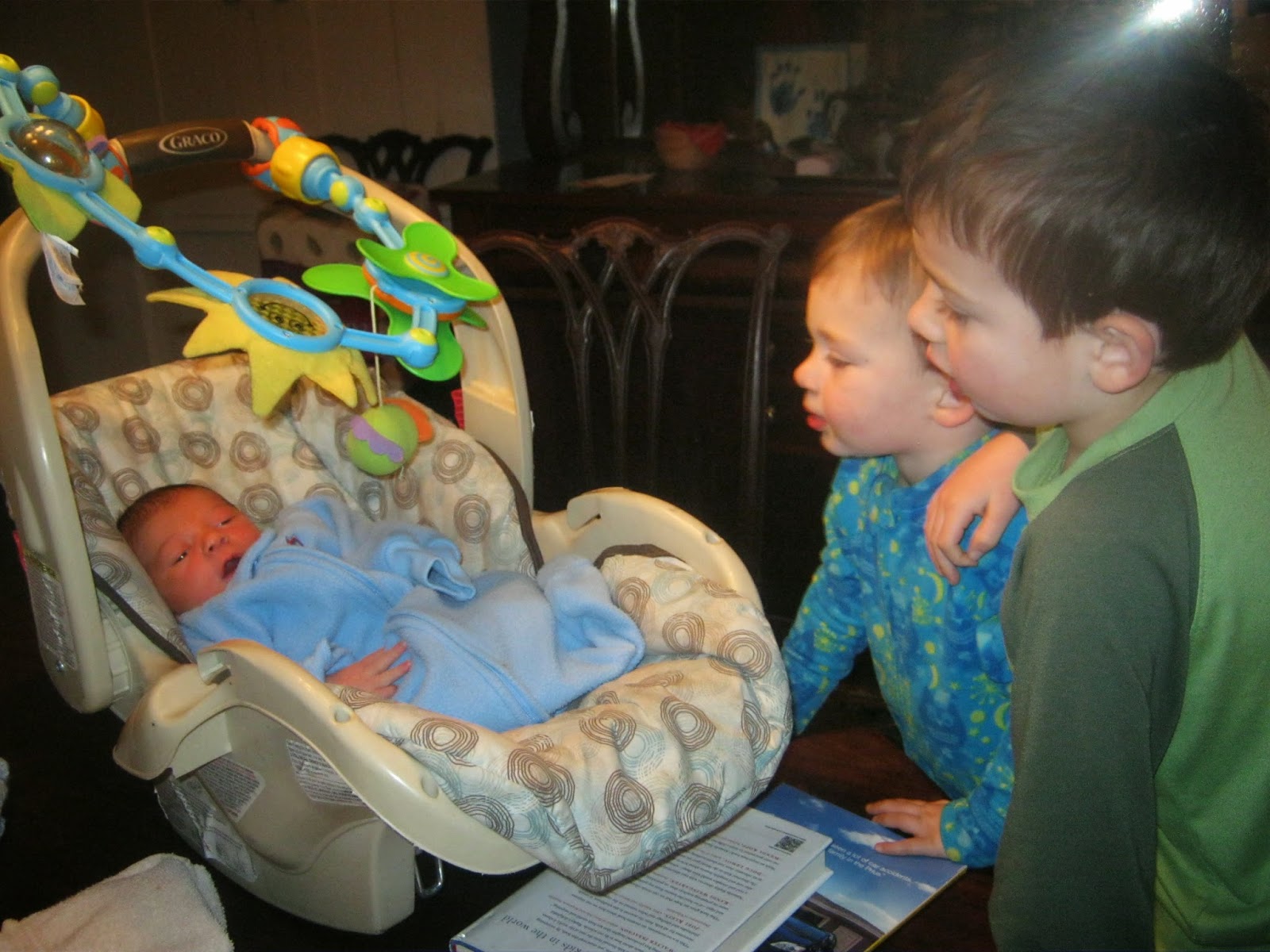 At the moment this photo was taken, Charlie was singing the bumblebee song* and Cubby was telling an involved story about trapping mink. Jack was obviously entertained.

Or say a rosary or send happy thoughts into the cosmos. Whatever you do to try to force a positive outcome, I need it. I have to take Jack in for another blood test this morning to see if his bilirubin levels are going down. They were a little too high last night when he was tested after his routine office visit, so if they aren't going down, Jack and I will be spending Christmas Eve and Christmas Day in the hospital.

That, to state the obvious, would suck a lot. So. Positive thoughts our way this morning, okay?

Peace out.
Posted by Kristin @ Going Country at 5:31 AM 5 comments:

Yesterday was my official due date. I didn't make it.

These kids of mine sure do take naturally to the eating.

The delivery was eerily similar to the other two, i.e., natural, relatively short, and no complications. This child had the decency to be born with the same blood type as me, and will therefore--we hope--escape the dreaded jaundice that plagued the other two and forced me to spend way more time eating hospital food than I wanted to.

This baby* looks quite a bit like his older brothers, about the same weight (8 pounds, 2 ounces), a little longer (22 inches), and lots of dark hair. I would show you a picture, but I'm currently typing this on the MiL's computer, because A.'s computer suffered a busted screen after he dropped it leaping up to rescue Cubby from a falling coat rack. This happened yesterday an hour after I got home from the hospital. I was upstairs putting Charlie down for a nap, which he ended up not taking.

So yesterday's homecoming included a non-napping toddler, a broken computer, and a thankfully not-injured small boy who came down with a cold this morning.

Life with three boys under five? You're looking at it.

Welcome to the craziness of Blackrock, little dude. You'll love us, promise.

* As for the name . . . obviously we shan't use the real name, but let's go with Jack. That goes well with Cubby and Charlie, right? Right. Baby Jack it is.
Posted by Kristin @ Going Country at 7:26 AM 13 comments: