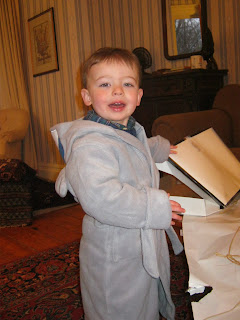 Happy birthday to the amazing Cubby.
Posted by Kristin @ Going Country at 5:25 AM 11 comments:

A few weeks ago, I noticed that the underarm seam on Cubby's winter coat had ripped out.  I don't know how it happened (though I suspect it had something to do with his father's habit of lifting him by the back of his coat, much like a mother tiger lifts her cub by the scruff of the neck), but I wasn't real quick about remedying the situation.  Because it meant mending.  And my God, do I hate anything to do with a needle.

This particular domestic skill has passed me by.  I can mend a seam, sew on a button, and hem some pants, but only when absolutely necessary.  Unfortunately, with a small boy and a larger boy in the form of a husband, there's a lot of ripping and lost buttons.  So unless I want to buy a new shirt every time a button comes off, I must do the loathsome needlework.

I'm quite good at putting it off for awhile however, as evidenced by the coat. It was just the outer shell that ripped; the inner liner was still intact.  It's not as if he was exposed to the elements or anything.  Just looking a little trashy.  With such rationalizations do I avoid the needle.

But then this week, I noticed one of Cubby's shirts had a loose button destined to fall off and get lost if not sewed on more tightly immediately, and then I ripped the seam of one of my own brand-new maternity shirts when I was trying to remove a tag*.

I took those two things as a sign that I should get off my ass and sew up my son's coat already.

Big sigh, out came the needle, thread, and scissors, and I commenced the tying of those tedious little knots and the making of the tedious little stitches. Which always end up being quite noticeable and large, because I haven't the patience for making little stitches and my mending is really ugly as a result.

The whole thing took me maybe fifteen minutes, and now I have that virtuous feeling that comes with having completed a long-delayed task.  Until my wretched seams give way in a week and I have to do it all over again.

So where are you on the sewing spectrum, duckies?  Are you the crafty type who makes your own clothes, or would you rather throw a garment away than sew on a button?


* Do not even get me started on scratchy tags in clothing.  I could write a whole, incredibly irritated post about how come they have to be sewn into a lining so they're impossible to remove without making a hole and why can't everyone just use those printed-on label things like L.L. Bean has instead of tags?  Except that would be boring to read, and anyway I pretty much just summed it up in that one run-on sentence.

Labels: all about me, Cubby, domesticity, randomness

It's really too bad I don't use four-letter words in conversation to my son.  Sometimes, they really express exactly what I'm feeling.

This morning, for instance, when Cubby woke up at 4:45, what I was feeling was, "This is some kind of bullshit."  Also, possibly a literal four-letter expletive that starts with "f."

But since I don't really want my son going around preschool telling his teachers that whatever they are doing is bullshit, I just bite my tongue, wrestle him into his clothing, and sit silently while he has the inevitable meltdown.  Because he WANTS his oatmeal, but he doesn't WANT to eat it in the kitchen.  COUCH. MOM, COUCH.  Although of course, that particular meltdown had more to do with the before-five wakeup than the oatmeal issue.  But I said nothing.

Doesn't mean I'm not thinking it, though.
Posted by Kristin @ Going Country at 4:18 AM 4 comments:

What Does Cat Vomit Promise?

Probably nothing I want to know about.  My first action this morning after giving Cubby his breakfast was to race into the living room to throw out the cat, who was making the sounds indicative of imminent vomit.  I would have gotten him out in time, too, if the door hadn't been locked.  That door is never locked, so by the time I figured that out and got it open, he had thrown up.  Mostly water, and only on the wood part of the floor, but still.

On a more positive note, yesterday was a good day, as promised by our late start and sunny forecast.  The sunny weather meant that Cubby and I could stay out most of the day, which always makes for more cheeriness all around.  He took a three-hour nap (which made me worry that he was dead in there or something, but whatever), AND A. made dinner.  Good deal.

Oh, and in response to the queries, I'm feeling fine, thank you.  It's been several days since I've had a day in which I can't find a position to sit or lie down in that doesn't result in crippling pain, so that's a positive.  I don't think it's all due to the yoga--probably some of the relief is just that this New Life Within has shifted position and decided to rest somewhere other than my sciatic nerve--but whatever the reason, I will take it.

Have a lovely Tuesday, duckies, hopefully free of cat vomit.
Posted by Kristin @ Going Country at 5:43 AM 6 comments:

The Promise of a New Day

My coffee came out just right this morning.  Our forecast is calling for something like 48 degrees, with sun.  And, most importantly, Cubby decided to give his poor parents a break and sleep until 6:45 this morning.  A distinct improvement over the 4-damn-30 he deemed an acceptable wake-up time yesterday morning.

It's looking like a good day so far.  Fingers crossed our lucky streak continues.
Posted by Kristin @ Going Country at 5:29 AM 5 comments:

The last remaining ram lamb has finally been consigned to the freezer.  Past time, in my opinion.

A. killed it, gutted it, and skinned it last Saturday.  Yesterday, he and the MiL cut it up.

I did not do the cutting up.  I actually refused to do it.  I had told A. after I did the deer that that was the last corpse I intended to handle this season, and by God, I stuck to that.

So I left all the work to the MiL, like a bad daughter-in-law.

These are the initial large cuts that A. produced with the meat saw and a knife. 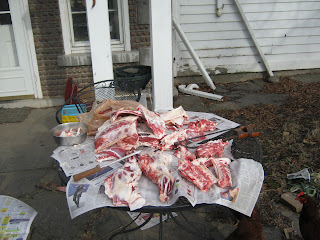 The MiL then spent a couple more hours trimming, boning, and wrapping before it all went in the freezer.  Well, all but the backstrap and the ribs, which A. insisted on grilling.  It was about forty degrees and he had to re-build our jerrybuilt grill in the yard, but he did it.


Then we all stood around outside gnawing on bones.  It was all very masculine and Cro-Magnon.  Except I didn't eat any because . . . well, because I didn't want to.  Cubby, however, was quite enthusiastic. 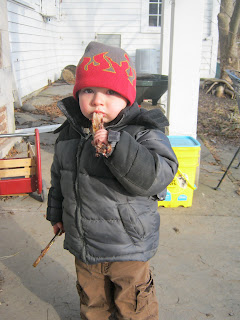 That's a bone in his mouth and a pair of pliers in his other hand.  You just never know when you might need some pliers.

After that, we all went to check our buckets in the maple trees and collected a few gallons of sap.  Just the beginning of what we hope will be about a hundred gallons in the end.

And that's Saturday at Blackrock.
Posted by Kristin @ Going Country at 4:34 AM 6 comments: