Remember when I casually mentioned a sprained ankle the MiL had? Turns out, it wasn't sprained; it was broken. And she had to have surgery on it Thursday. And she's not supposed to put any weight on it for two months. And she has to hobble around on crutches.

The other night when A. was on his way home from night court in a small, podunk court in our county, he stopped to pick up a hitchhiker. They got to talking, as is often the case with a hitchhiker and a driver. This hitchhiker told A. he was on his way home from work. He works construction in the nearest city. He apparently has no car, and rural areas don't have buses, so he's been walking and hitching back and forth to work every single day. You ready for the shocking part of this?

The city he works in is 20 MILES from this guy's trailer. ONE WAY.

No, really. This guy in all seriousness gets up at 1 a.m. to start walking to work, in order to be there by 6 a.m. And then, if he can't hitch a ride home in the afternoon, he walks the 20 miles back to the trailer park he lives in, after working a construction job all day. He's trying to save money to get a place in the city he actually works in, but until then, this is what he does. He was not an educated man--A. was of the opinion he was probably mostly illiterate--and he was not a smart man. It's not as if there's a plethora of employment opportunities for him in this area. But he got a job, and he needs to keep that job, so he walks 40 miles--40 MILES--roundtrip every day.

This made me a little sad, because goddamn, this guy is trying SO HARD. And it made me ashamed for anything I might think is even worth complaining about in my life. Really, no matter how much I might think something sucks for me, it is NOTHING compared to that man's circumstances.

A little perspective is a sobering thing.
Posted by Kristin @ Going Country at 5:07 AM 12 comments:

If we're talking about bizarre and amusing vegetables, that is. And aren't we always?

I don't know what it is about our soil that makes carrots sprout extra appendages and grow all twisted, but they do. Always. This year, the carrots got particularly large, and so their deformities are particularly amusing. Also, I totally forgot we had this package of sample carrot seeds of all different colors that we randomly threw in at the end of the carrot row when we ran out of regular carrot seeds. Then when I started digging up carrots awhile ago and I came across a white carrot, I was very, very confused. And A. was all, "Bunnicula got to our carrots!"

That was really funny. 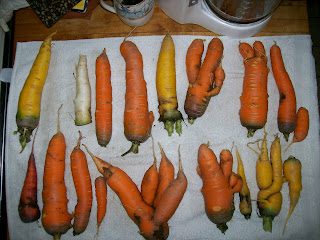 Freaks
Posted by Kristin @ Going Country at 5:44 AM 14 comments:

Labels: country livin', fun with food, gardens, the A team

In Which I Justify My Laziness

It seems as if many of the garden blogs I read are keeping track of harvest totals this year. I like to read these and see just how many pounds of beans someone (Finny) is harvesting, but I can state with some certainty that I will never, ever do this myself. Despite the fact that were I to do so, I would TOTALLY WIN.

Wait, is that not the point of keeping track? My bad.

The reason I will not do it is that there is just too much. Isn't it enough that I have to plant, tend, harvest, and process the output of 70 corn plants without hauling out a scale and weighing it all, too? Yes, I think it is enough. Anyway, my kitchen scale only goes up to 11 pounds, which means anything heavier than 11 pounds (and many of my harvests are heavier than that) would require the hunting up of the bathroom scale, weighing myself first, then weighing myself holding the harvest and subtracting to get the weight of the harvest.

Honestly, that's just too tiring. Could you imagine doing that for all those boxes of potatoes? No thank you.

BUT. Just for fun, and because A. was curious, I weighed everything I harvested yesterday. I spent an hour or so in the morning gathering tomatoes, green beans, jalapenos, purple cabbages, Seckel pears, and the pumpkin of Damocles. This is the only time you will see actual harvest totals on this site:

Tomatoes+green beans+jalapenos that were all in the canvas bag and did you REALLY expect me to pick them all out and weigh them separately?: 8 pounds
Cabbages: 24 pounds
Pears: 14 pounds
Pumpkin: 12 pounds 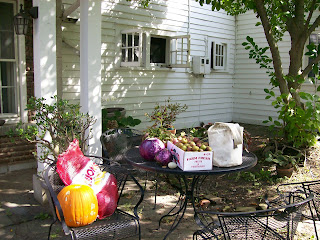 The onion bag is full of purple cabbage. And oh look! There's an egg! It's not included in the total.
The Seckel pears, by the way, are not all picked. I just did the ones I could reach from the ground. I'll have to get A. out there with a ladder to get the ones on the top, so there will be more of those. And that's just a small tree in the paddock. The big pear tree in the ram pasture is the one that provided 39 quarts of canned pears last year. Those pears have not yet been picked. There is much more to come, oh yes. But as far as the actual weight goes? You'll just have to go with my standard measurement of a shitload and leave it at that.

Well, apparently, the MiL. A. mentioned when I ordered my creamy fat on bread that sausage gravy and biscuits was totally unknown in this area until about ten years ago, when it migrated north from Pennsylvania. He sought confirmation of this fact from the MiL, who not only confirmed it, but added that the thought of sausage gravy was a scary one to her.

Obviously, this is a woman who needs to have a religious sausage gravy moment.

This got me thinking about regional foods. Which leads us to . . . The Question of the Day! Yes, it's AUDIENCE PARTICIPATION DAY! WHEEEE!

I know, the excitement is overwhelming.

So, if I were to show up at your house demanding to be fed (which, quite honestly, is pretty likely--the demanding to be fed, not the showing up at your house, I mean), what regional food would you tell me I must sample? What food is so inextricably linked with your area that when you're away from home for any length of time, your first action upon returning home is eating that food?

P.S. The first comment made me aware that I was not entirely clear in my question. So, no, it doesn't have to be a breakfast item. And even if I were eating it for breakfast, it could still be anything, because I will very happily eat tuna salad or leftovers from an Italian restaurant (nothing like five cloves of garlic at 7 a.m. to wake you right up!) for breakfast. Those are not hypothetical examples.

P.P.S. I am now thinking of taking a cross-country road trip solely to visit all of you and eat your food. However, make sure when you comment you tell me where you are. How am I gonna know the regional food if I don't know the region? I mean, I can GUESS a brain sandwich is somewhere in the south, but where? I'm all about educated gluttony.

Labels: fun with food, MiL, randomness, the A team

Despite the excellent advice of several of you, I have not been staying in bed, drinking tea delivered to me by the MiL and reading mysteries. For several reasons. For one thing, the MiL sprained her ankle so badly last week that she's still limping around with a cane, which would make carrying a hot beverage a hazardous undertaking. For a second thing, I just finished a collection of Hercule Poirot mysteries (that's Agatha Christie, by the way) just before I got sick and I don't have any other mysteries on hand. And for a third thing, my parents have been here for a brief visit.

Since they were only here for two days, I figured it would be pretty lame of me to insist on staying in bed for the short time they were here. Sitting around and watching me blow my nose wouldn't have been much of a vacation for them. So I cowgirled up, stuffed my pockets with tissues, and hit the road with them. We didn't go far--just to a city to see a couple of museums on Saturday. Yesterday my dad the not-so-amateur carpenter and A. spent most of the day cutting up pieces of wood into blanks for bowl turning, which is my dad's new thing. I'm pretty sure my dad would come visit our trees even if we weren't here--we know where his affection really lies.

My mom spent the day helping me harvest things (grapes, green beans, tomatoes, carrots, chard) and watching me cook (curry). The MiL made one of her spectacular chocolate cakes, and a good time was had by all. This morning A. and I go to breakfast with my parents before they get on the road again, and maybe THEN I'll take to my bed with my tea. After I process some more tomatoes. And maybe pickle those jalapenos. And finish my laundry.

Yeah, who am I kidding? By the time I make it to bed-rest, the cold will already be gone.
Posted by Kristin @ Going Country at 5:24 AM 7 comments:

A Brief, but Heartfelt, Message

I don't know how my nose and upper lip survived colds before Puffs with lotion (and, in my case, their generic equivalent) came along.

Let us all be thankful for the small mercies in life.
Posted by Kristin @ Going Country at 5:18 AM 12 comments: