Friday Food: So Much Repetition


Not the most original week, but everyone was fed.

Long version: I have only two basil plants, from the fourteen I started with in pots in the kitchen. Most of them didn't survive transplanting, which seems to be a common problem for plants of all types here. Of the two that did survive, the one in my regular garden bed is pathetically small. The one in the sunken bed with the lettuce is the only one that's producing basil in any quantity.

I used most of the plant for this pasta and had juuuust enough for a full pound of pasta. I should have had a little more, in truth, but I didn't.

Long version: I finally fixed my sourdough starter problem by getting my original starter back. See, several months ago in the course of conversation with the lady from whom we buy our milk, she complained that she had never yet managed to get a good sourdough starter going here in New Mexico. Since I was still using the starter I had brought with me in a cooler from New York, I gave her a jar of mine, which she has been using with great success ever since.

After I gave up on getting my frozen starter back to its original state, I called May and asked her if I could have some starter back. She's about to leave for her own month-long trip, and had actually just frozen almost all of her starter. Thankfully for both of us, she found an old jar of starter in her refrigerator that she fed for me until she was sure it was okay, and then gave me some.

Imagine the sadness if her starter had ended up like mine. I can't even think about it.

I baked a batch of bread--and the garlic bread we ate for dinner this night--that came out perfectly. So I am now the Keeper of the Starter for both of us, and I will never leave my starter in the freezer again, amen.

Long version: It's really too warm to be pot roasting anything, but the arm roast I pulled out of the freezer would not have done well on a grill. I did most of the cooking in the morning. At dinnertime, I pulled the meat apart and heated it up in the liquid left.

The summer squash came from Rafael, who has begun his deliveries of produce again, despite the fact that we now live ten miles away instead of down the street. I don't really care about summer squash much, as I have never found them to be bursting with flavor, but that problem is easily remedied by olive oil and a lot of garlic.

The cucumbers, however, which were also from Rafael, were bursting with flavor. The flavor of good cucumbers. I have never had a cucumber from the store that doesn't have a slight edge of funkiness to it that a homegrown cucumber never, ever has. Homegrown cucumbers only taste sweet and fresh and incredibly good. Well, except for the bitter ones, but even those don't have the weird taste store cucumbers have.

I'm so glad Rafael is sharing with us again, because not a single one of my cucumber seeds germinated and it would have been sad to go a whole summer without a good cucumber.

This is what Cubby was doing to entertain himself this week: 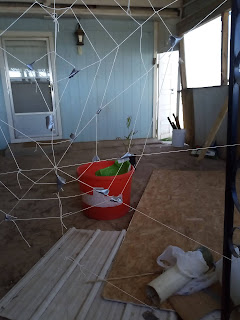 This apparently is an orb spider's web. It was originally positioned in the doorway to the covered porch, but I had to insist that the construction project be moved to a less obstructive spot.

Short version: The chicken fillets were from a bag of fully cooked frozen Schwan's chicken fillets that Ray gave us when he was unloading his freezers. They had a really spicy breading on them, which I had to take off for Charlie and Jack. Cubby likes spicy food, so I left it on for him, and he loved these things. "They taste like restaurant chicken, only better!" Okay, then.

The cabbage was actually the mini heads of cabbage that I harvested after we got home from our trip. Fun fact about cabbage: If you cut off the main head carefully at the base and leave the plants in the ground, they will grow several small heads all around the base. It's like a free harvest.

Long version: At about 3 p.m., A. asked what we were having for dinner and I said, "Ground beef. Final form yet to be determined." To which he replied enthusiastically, "Wouldn't it be good to have hamburgers with bread buns? Like, with the sourdough bread?"

There are those low standards again. So useful.

These eggs did not come from our chickens. 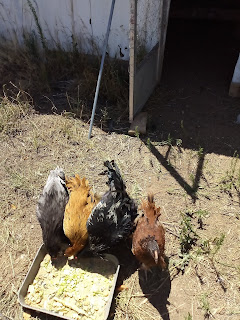 Ours are still freeloading, but it does look as if we have only one rooster. Hooray!

And there are the garlic bread and vegetables again.


Okay! Here we are with our second installment of carefully chosen and edited photos from our family trip to New York.

Or rather, the random and totally unedited photos I managed to get that one day I remembered to bring my phone down to the lake.

We went to the beach every single day but one during the 16 days we were at Blackrock. It's not very hard to do when you just have to walk downhill about three hundred yards. Despite some unfavorable weather and water conditions on some days, the children got in the lake every day but one, as well.

I include Poppy in this. 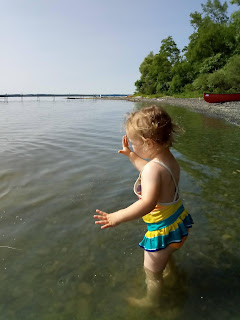 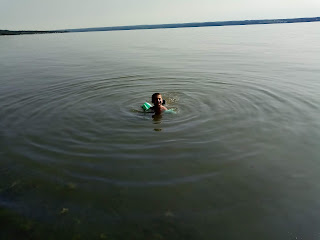 A.'s brother and his family came from Tucson, so there was lots of cousin time on the beach. 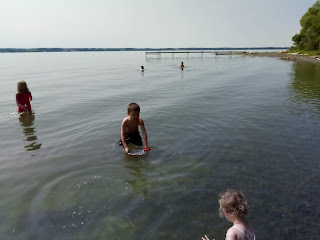 And, of course, Captain Cubby directed many voyages in his custom-built craft. 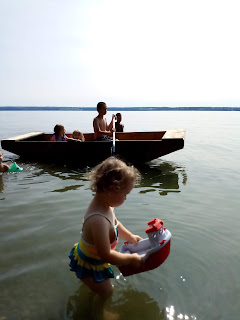 Poppy preferred being captain of her own small vessel.

There are no photos of A. and me in the water because we avoid it as much as possible. A. might have gone in twice, and while I spent a lot of time standing in shallow water with Poppy holding my hand, I didn't even put on my swimsuit the entire time. I never went in deep enough to get my skorts wet.

I know. We're the worst beach-goers ever. What can I say? I like land.

We'll leave it there with this collection. What will the next collection of photos be? Stay tuned to find out! (Sometime.)
Posted by Kristin @ Going Country at 8:27 PM 2 comments: