I am not a meticulous housekeeper. This is something I've accepted about myself. My house will never be spotless.

But it's not all my fault.

Not to pass the buck or anything, but old houses are a major pain in the ass to clean. They just are. They include features that present unique cleaning challenges. Probably because they were built with the assumption that servants would be doing the cleaning, and who cares about their convenience?

Instead I had to move as much junk out of the way as I could--fireplace tools, andirons, chairs--so I could get a mop in around the sides of the woodstove and clean the bricks as best I could with water, vinegar, and borax on the mop. And now there's a big box fan roaring into the fireplace to dry it as quickly as possible.

It was incredibly gross behind the woodstove. Unsurprising, since I think I last cleaned back there about three years ago, other than cosmetic dusting for cobwebs or whatever. A lot of soot and filth can collect in three years. To say nothing of the mildew.

And now it's your turn, my lovelies! What's the most hideous cleaning job you have ever been forced to do?
Posted by Kristin @ Going Country at 6:42 AM 9 comments:

Labels: all about me, Audience Participation Days, Blackrock, domesticity

Bacon Is the Answer

No, not to everything. If I read one more, "Bacon makes everything better!" article or post, I'll . . . well, I'll curse silently to myself. But it will be vehement silent cursing. Bacon is good and it has its place, but its place is not in everything. Like mayonnaise. No. Please.

It does, however, have a place in meatloaf. Or rather, around meatloaf.

See, remember we don't eat bread? Well, without bread, it's hard to keep a meatloaf from falling apart into a big pile of loose meat when it's cut. So unappetizing. I've tried a lot of other things to glue the meat together, without success. But then I decided to wrap the whole thing in multiple strips of bacon, as recommended by America's Test Kitchen.

I did it originally for the fat it would add to the very lean, grass-fed ground beef we buy from the farm up the road. But it turns out that wrapping the whole thing in bacon makes a fatty meat swaddle (mmm, meat swaddle) that holds the meat in a nice compact bundle for cooking.

Plus, it tastes really good. As you might imagine. Bacon is definitely the answer to bread-less meatloaf. Just please keep it out of my mayonnaise.
Posted by Kristin @ Going Country at 4:17 PM 4 comments:

What Makes Me Laugh

Charlie in a coonskin cap. 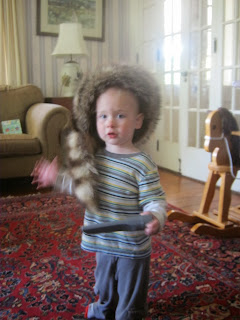 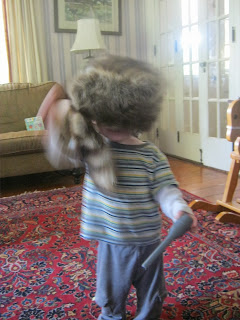 When you come downstairs in the morning to find this: 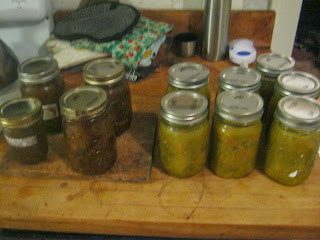 Four pints of pear chutney courtesy of the MiL, and seven pints of green tomato chutney. Bring on the curry. 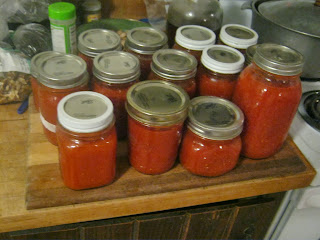 Fourteen and a half pints of tomato sauce. This would be more impressive if it didn't represent the entirety of the tomato canning.

To say nothing of this: 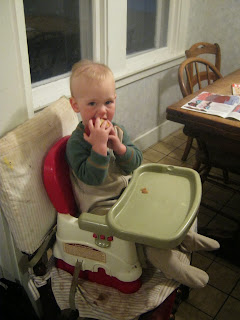 Baby with apple. Charlie spent a lot of time in this chair yesterday watching me fill jars.

You know the previous day was one hell of a busy day in the kitchen.