Yes, today is the official start of fall. So why is my forecast calling for 87 degrees on Sunday?

That is not sweater weather.

(I think that the weather is supposed to be some kind of online conversational suicide, right? But too bad. That's what I'm talking about today.)

Last weekend it was 84 degrees here, so we took the kids to a local lake beach for a dinner cookout and their last chance to swim. Except apparently it wasn't their last chance, because we have multiple days coming up that are going to be over 80 degrees.

In case you missed it, I do not live in southern Arizona. It is not supposed to be hot here at the end of September.

So much for the frozen north.

The tomatoes, of course, are loving this hot, sunny weather. Especially under their cozy woodchuck greenhouse. A. is the designated harvester this year, as the greenhouse requires a person to duck and literally crawl around to actually get to the tomatoes, and those are not things the 8-months-pregnant body can do without great difficulty. So every couple of days, A. goes out there and proudly bears into the house a big box full of ripe tomatoes.

I spent this morning making salsa and pressure canning it--plus a few random quart jars of plain, raw-pack, not-even-skinned chunks of tomatoes--to take care of the fifty pounds or so of tomatoes that were on the counter. I expect the same amount of tomatoes will be landing on my counter tomorrow.

Sure would have been nice if the tomatoes could have ripened when I wasn't due to have a baby, like, ANY TIME, but I'm not complaining. Much. And I'm trying not to complain too much about the unseasonable heat, because I know I'll be desperate for any hint of warmth in March.

How's the weather where you are, my lovelies?

Labels: all about me, the A team, the great white north, The Tomato Crazy, weather

It Appears a Dairy Cow Is In Our Future


I went to the grocery store yesterday and I realized that over half of the items on my list were dairy foods: cream cheese, cottage cheese, butter, milk, Parmesan cheese, and buttermilk*.

No regular cheese, though. And why no regular cheese? Because A. went to the cheese factory in our local village a few days ago and came home with this: 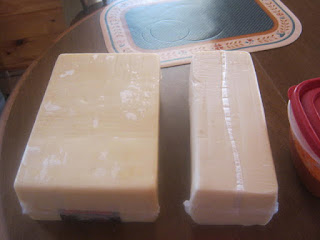 You are looking at 17 pounds of cheese. That's right. Seventeen.

You may find this ludicrous. Perhaps you think that A. just got carried away and brought home more cheese than we could ever eat.

Nope. This is the third time we've bought this quantity of cheese. It lasts us a little over a month.

You could say we eat a lot of cheese. And butter, milk, yogurt, cream, cottage cheese, cream cheese . . .

Yeah. We're gonna have to get a dairy cow some day. And that day is probably going to be sooner rather than later.

* No cream, but only because I go to a different store for that to get the real, not-ultra-pasteurized cream.

Labels: all about me, confessions, fun with food, the A team

The Return of the Irritating Monkey


Thus far, Jack has shown no interest whatsoever in sitting down and staring at a television show. Not that I can get too upset about this. I mean, does an almost-three-year-old really need to veg out on the couch on a regular basis and watch animated animals cavort around?

No. Far better to pretend to mow the grass with Daddy's moving dolly or build elaborate structures with scrap wood.

Then again, it is awfully nice to sometimes have the option of putting on a cartoon for children so they're not all up in your face all the time.

Part of Jack's disinterest is probably because the only thing we ever put on is an episode of the original Transformers television show from the 80s. This is my bribe to get Cubby and Charlie to pick up their toys at night. After nighttime pick-up, they get one episode of Transformers. This is perfect for the older two, but Jack is mostly disinterested. It is a show for older kids, after all.

However, one of Jack's favorite books at the moment is Curious George Makes Pancakes. So it has crossed my mind that he would probably really like the Curious George cartoon on PBS. I hadn't ever tried it out on him, though, mostly because I didn't really want to start the whole expectation of a cartoon.

Jack woke up at the unpleasant hour of 5 a.m. today, thanks to the back-to-school cold brought home by his brothers. I read him The Big Caribou Herd and we spent some time discussing the animals. A. got up and read him a tractor book. And then I wanted to lie down for a little while before starting to pack lunches and make breakfast (not so much with the sleeping last night). So I suggested to A. that he could find Curious George on PBS Kids online and see if Jack liked it.

He did. Jack was enthralled with the sight of his book buddy in actual motion, talking (kind of) and everything.

He got to watch two episodes before it was time to wake his brothers up for school. Twenty minutes of reprieve for Mom and Dad? Thanks, monkey. I still think you're annoying, but you sure are useful sometimes.

Labels: all about me, confessions, Jack, randomness, the A team
Newer Posts Older Posts Home
Subscribe to: Posts (Atom)