There were two nights this week that I was not the primary cook. This trend may continue.

Long version: Cubby has a habit of standing right next to me while I'm rushing to get dinner on the table, asking questions and remarking wistfully that he wishes he could make dinner.

Believe me, I would like nothing better, son. The problem is getting from wishing to make dinner and actually being able to make it. In between those two things is a lot of instruction and interfering younger siblings.

In pursuit of the greater good--that is, one day not making every single meal myself--I asked Cubby if he would like to make dinner on Friday night. As expected, he was enthusiastic. I asked him what he wanted to make. "Hamburgers," he said immediately.

"Yes. Vegetable." I suspect he subscribes to his father's idea of a "balanced" meal. That is, meat and maybe an optional starch. Vegetables don't immediately come to mind. He needed a little coaching on this point. He decided on tomatoes.

So that's what he did. I did a lot of suggesting and unobtrusively flipping quesadillas or hamburgers to avoid burning, but I tried to stay out of his way. 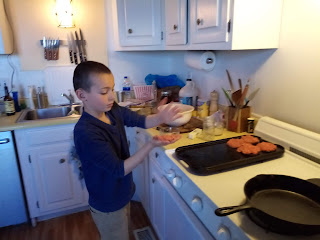 He ended up adding the remainder of a cucumber to some grape tomatoes and using the last of a jar of previously-made vinaigrette to make a tomato and cucumber salad.

Everyone enjoyed Cubby's meal. He was very proud. 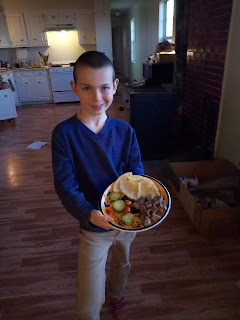 A very goofy photo of the cook and his finished product.

Long version: I was lazy and just added butter, garlic powder, pepper, and Parmesan cheese to the pasta. The children were pleased with this. But then, they're always pleased with pasta, lazy or not.

Long version: A. bought a duck like two months ago when he happened to see one for a good price at the market. He LOVES duck. I can take it or leave it, so he was in charge of cooking it.

He found a recipe in which the duck is stuffed with cloves of garlic and rosemary--he substituted thyme at my suggestion, because I dislike rosemary and don't have any on hand--and then it's roasted on top of sliced potatoes. So he did that.

I made the mushrooms and onions mostly because I had an open package of mushrooms to use up and an onion that was starting to go bad. And green beans because part of my Motherhood Contract is to provide some kind of vegetable at every dinner. Even if I'm not technically cooking.

It was Sunday, so Jack and I made peanut clusters for dessert. I didn't even use a recipe. I just melted chocolate chips and a bit of coconut oil in the microwave, then mixed in roasted and salted peanuts and dolloped the goop on a parchment-lined baking sheet.

I put this in the refrigerator to firm up. About two minutes after that, Cubby asked if we could call my dad. While I was dialing the phone, Jack asked if he could have a carrot. I asked him to wait a minute, but he decided to help himself. By the time I had my dad on the phone with Cubby approximately ninety seconds later, Jack had the refrigerator door open and Poppy had the tray of still-goopy peanut clusters on the floor.

Luckily, she hadn't had time to smear the chocolate all over. The peanut clusters were all still on the parchment paper. They had sort of slid together, but I pushed them roughly back into shape and they were fine.

It was a classic Mom Moment. Kids are fun. 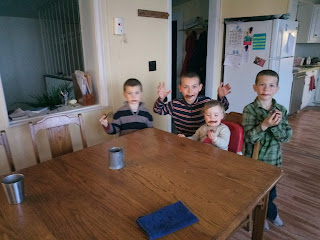 They are also very prone to smearing chocolate all over their faces. Like I said: Fun.

Long version: Yeah, A.'s stew . . . when he prepared his duck, he found giblets. He asked me what to do with them, and I told him they're usually used to make stock. So he did that. Then he added the bones left after the kids were done eating--they never get all the meat--and simmered it some more. The next day, he added some pigs' feet and then a rabbit that Cubby caught in a snare.

Right at dinnertime, he added the potatoes left from roasting the duck and a couple of the carrots from the pot roast. He said it was Joyful Stew because it was so satisfying. It actually tasted better than you would think, and both Cubby and Jack elected to eat Daddy's stew. Charlie went with the less-exciting pot roast. Poppy ate both.

Long version: In the northeast, Shrove Tuesday is celebrated with pancakes. I like pancakes, but I'm not from the northeast. Neither is my mother. She's from New Orleans, and so, in honor of my heritage, I made not-pancakes.

The collard greens came from the last bag of frozen blanched greens from last summer. There's more in the bag. I may make those greens last until I have lettuce from our garden.

Children make almost as much mess with cornbread as they do with rice. 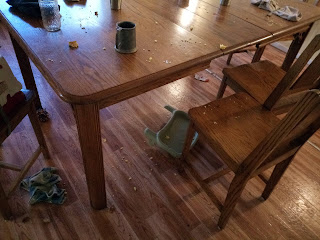 Lovely. A lot easier to sweep up than rice, though.

Long version: Ash Wednesday means no meat and church at 5 p.m. I made the vegetables and rice before we left to pick the boys up from school so when we got home at 6 p.m. with an exhausted baby and three hungry boys, all I had to do was heat everything up and scramble the eggs. Peanut sauce just means I add peanut butter to my standard soy sauce/vinegar/ginger/sugar/cornstarch sauce. The peanut butter makes the sauce way better than you'd think it would.

Long version: Cubby and Jack chose the stew; Charlie, Poppy, and I ate the steak; and A. ate it all.

A Plethora of Possibility


Yesterday was an exceedingly boring day. The cold temperatures--it never got above 12 degrees--and the snow meant that Poppy and I didn't go outside. The boys did have school, though there was a two-hour delay and the other bus just didn't run.

The other bus brings the majority of the elementary kids, so Cubby was the only one in his class yesterday, and there was only one other student in Charlie's class.

But there were seed catalogs! 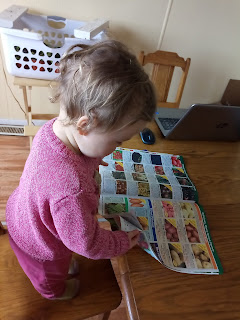 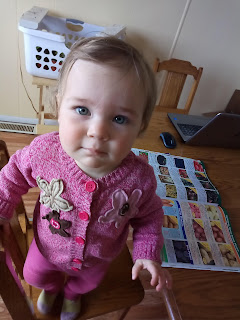 Looking at seed catalogs is an interesting experience now that I find myself with a couple of acres of bare dirt of my own. Blackrock, of course, was already fully planted with many kinds of plants, as the MiL is a very knowledgeable and active gardener.

The last two houses I lived in were rentals. This is the first time I find myself with the responsibility of planning out gardens by myself. Well, by myself with A., of course, who is also pretty knowledgeable about plants.

We could get a climbing rose for the ramada! We could put lilacs by the fence! We could plant sedum around the patio!

One nice thing about starting from nothing is that anything is an improvement. There will be some trial and error, I'm sure (lots of error, probably), but it's fun to do the planning part. Especially when it's 12 degrees outside.

* Even in the house. The living room was 58 degrees. We have to work on the heating situation before next winter.


For the two years we lived on the Canadian border, we experienced severe winter storms on March 14th. Both years.

Honestly, that sort of thing was one of the reasons we moved.

I was not expecting March 14th to feature heavy snow here in New Mexico. I don't think it will. March 4th, however?

This is pretty severe winter weather for our current location. 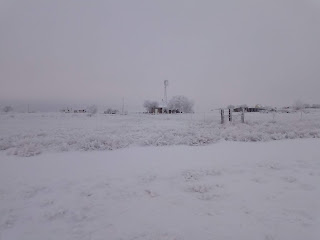 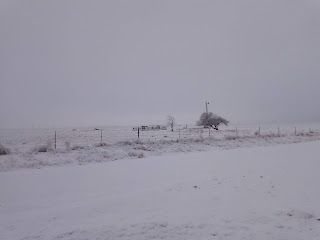 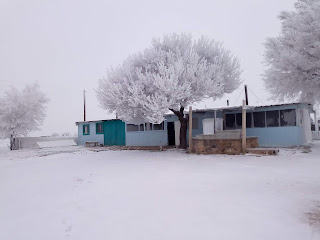 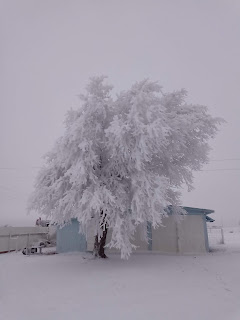 It all started with ice on Saturday night, which ensured that the subsequent snow would stick to everything. It dropped into the single digits last night and hasn't been above freezing for 48 hours now.

The big difference here is that it was almost 70 degrees the day before all this started, and it's going to be 70 degrees again on Thursday.

I can take a winter storm in March when I'm pretty sure I'm not going to be seeing winter weather for the next two months.