Important news: The perch are in.

I can't convey to you how happy A. is about this. The amazingly cold spring has meant that the water temperature in the lake has been correspondingly cold, and that meant that the perch have been staying away from the shore. Usually in late April and May, the perch and other panfish come right in to the shallow water in swarms, and A. and Cubby can go out and catch a dozen in a half hour from the village dock.

No such luck this year. A. bought minnows for bait and went out over and over, with no results. They just weren't there.

But in the meantime, we have this cooler of minnows sitting next to the house. The children, as you might imagine, have been all into that cooler.

Cubby checks it regularly for the inevitable one or two dead minnows that have floated to the top. He helpfully removes these. At first he threw them into the lilac bush for the cat to find and eat. But soon he discovered the joys of dissection. With his fingers.

He stands there squishing the minnow in his fingers, showing me the swim bladder and whatever other innards he thinks he's identified while I avert my eyes and make non-committal comments. He informed me that he is a scientist, and so he needs to look at the insides of the fish.

Right. I am not a scientist. I do not want to see the insides of a fish.

Nor do I wish to have a dead minnow placed on my bare foot. Or arm. Or hand. Or wherever Charlie tries to place his dead minnow, because you know if Cubby has one, Charlie has to have one too.

It's hard to say what is more repellent to me: a whole dead minnow on my foot or a mutilated dead minnow waved in my face.

A. took Cubby fishing in the canoe on Wednesday and found perch. Lots of them. They were in. So the hated (by me) minnows finally produced a nice catch of four big perch (A. had to leave for court, so they didn't have time to catch more). They brought the perch up to the house in the minnow cooler. While A. filleted the perch, Cubby manhandled the remaining perch in the cooler, carefully explaining to Charlie about gills and fish slime and whatever other great wisdom Cubby possesses about perch. 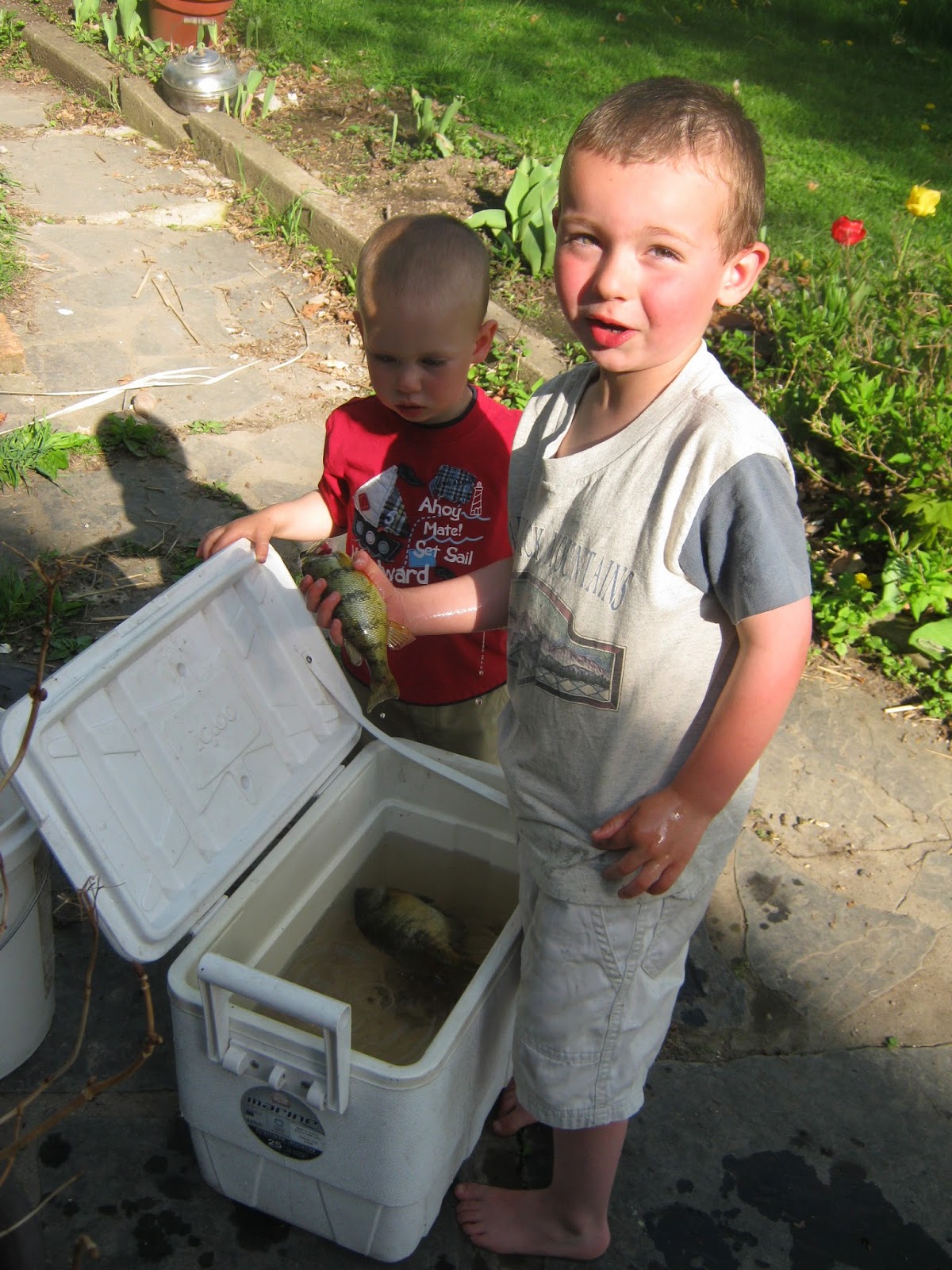 He has a lot of wisdom to impart, obviously.

Four perch--even large ones--don't make for very substantial fillets, so there wasn't a lot of fish for dinner that night, but the children very much enjoyed what there was. And I have no doubt there will be a lot more perch in our future. Because the perch are in. Finally.

The MiL hosted her book group last night at our house, which of course meant that I spent yesterday cleaning up. In my case, that meant outside and inside because when the weather is warm we live almost equally both inside and out.

Outside: Random bits of boards used to make a road for Cubby's firetruck, the weight bar A. lifts with, some of A.'s traps that Cubby had "set" on the lawn to catch Charlie, various muddy boots and on and on and on.

Inside: Too many damn books and newspapers and magazines to be believed because we are too literate, an incredible array of toy pieces (blocks, puzzle pieces, a magnetic fishing pole, hammers, confiscated swords, etc.), sunscreen, receipts, Mia's broken dog collar, a magnifying glass, and on and on and on.

It took me over an hour just to get the downstairs in order, and that was before I did the actual sweeping and dusting and vacuuming.

I always think, while doing this, that it would be so much easier if I would just keep it neat all the time. Then all I would have to do is the actual cleaning, not the picking up. I'm not saying we live in squalor; it's mostly picked up and mostly clean at all times. We do toy pick-up every night before bed, but there are always bits and pieces that get under tables and chairs or are just so random I don't even know what to do with them (piece of ribbon that was a fishing line and MUST be saved? there is no place for that). Those things build up incrementally until company is coming.

Because the embarrassing truth is that without the threat of public shaming, I am not motivated to really clean my house.

There. I said it.

Now, how about you, my lovelies? Do you keep your house in company-worthy condition at all times? Do you frantically clean only when you know someone will be entering your home? Or do you not care and just let it all hang out for everyone to see?

Labels: all about me, Audience Participation Days, confessions

Chocolate and Potato Chips: A Story for Mother's Day

Have you have ever had a Drumstick ice cream treat? They're essentially ready-made, individually wrapped ice cream cones that you can buy at the grocery store. We always had them in our house when I was in high school. At the bottom tip of each cone was a little nugget of fudgy chocolate. This was my favorite part. And whenever my mother was eating a Drumstick, she would save this bottom tip for me.

Similarly, I have always had a particular liking for the folded-over potato chips, rather than the thin, single-layer ones that are more common in a bag of chips. If my mom was eating potato chips and found one of these doubled-up ones, she would come find me and give it to me.

These are no doubt trivial and silly memories to be sharing on Mother's Day, except for the fact that they actually demonstrate some very important and elemental things about my mother: her selflessness and consideration for other people.

Happy Mother's Day, Mom. Thanks for the chips. (And a few other things.)
Posted by Kristin @ Going Country at 4:49 AM 3 comments: