It's a lot harder these days to get a picture of Charlie and me in the mirror, mostly because he's enormous and heavy and constantly lunging for the camera. Kinda hard to keep a good grip on him with only one hand. But I did manage one recently: 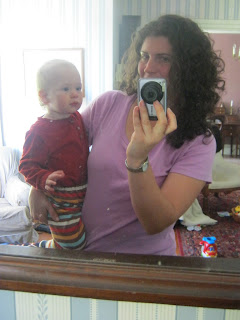 Mostly so I could appropriately document these ridiculous stripey pants I put on him once. And only once, since they're 12-month size, and my 13-month-old boy is now in 18-month clothes.

At least he was lunging at the camera instead of my hair.

Although "dialogue" is not really the right word, since that implies two people who are listening to one another speak and responding appropriately. Small children will sometimes listen to one another, but their responses are not always appropriate to the subject at hand.

The following, uh, talking activity occurred this morning between Cubby and a five-year-old boy at the library story hour:

Cubby: Come ride on my train! (His train is a long, cushioned window seat in the library.)

Other boy: Once we rode on a plane to visit my grandfather his name is Poppa well he has two names we call him Poppa but his other name is Ron* . . .

Cubby: I went on a walk with the dogs and a nettle stung me!

Other boy: I have another grandfather and he has two names too we call him Grandpa and . . . I can't remember his other name . . .

Cubby: This is the bed on my train!

It went on like that for some minutes. Neither boy was bothered in the least by the fact that the other child was talking about a completely different subject.

It exhausted me, however, trying to frame an appropriate response to two parallel conversations that had no intersections whatsoever.

It was very amusing, though.

* The lack of punctuation is a deliberate attempt to visually re-create the non-stop, no-pause conversational style of a five-year-old.
Posted by Kristin @ Going Country at 5:34 PM 3 comments:

Now here's a peril of motherhood I've never heard a warning about: Having kids means you will probably start to leave things on top of the car and drive off with those things still there.

I did this first--and quite memorably--with my wallet in Pennsylvania. I was extraordinarily lucky and it was returned to me intact.

I was not so lucky with my checkbook, which I left on the top of the car after buying some meat at the farm up the road. It actually stayed on top of the car almost until I got home. Both of the checkbooks that were in the cover were found on the road and returned to me. The cover never turned up. The cover was leather, hand-made and embossed with various personal decorations by my grandfather. It, among all the things I have left on the car, was irreplaceable. And so of course, it's the one thing that has been lost for good.

Yesterday I left Cubby's bunch of grapes on top of the car. We stopped when he saw them go flying by the window and informed us of this fact. I found them in the grass and returned them to him.

Today I left a canvas bag with a few harvested cucumbers, tomatoes, and green beans on top of the MiL's car. Not even my own! The senility is progressing alarmingly. I found the bag on the side of the road just past our house. It had been run over and so was coated on the inside with tomato puree, but no harm came to the bag otherwise.

The reason this happens after the arrival of children, of course, is that those children need to be buckled into their car seats. And if I happen to have something in my hands, I have to put it somewhere so my hands are free to deal with buckles. You would think, by now, I would have learned to put whatever it is on the floor of the car or something. Anywhere but on the roof.

Maybe I'll learn eventually. Or maybe the kids will get old enough to get their ownselves in and out of the car and I won't have to worry about it. I'm betting on the second happening before the first.
Posted by Kristin @ Going Country at 5:28 PM 8 comments: