I'll tell you one thing about living in a place with a long and severe winter: That first day when you can send the (my) kids out to play in just rubber boots and a light jacket is very exciting. Especially if it's sunny with no wind and all you (I) have to do is sit there in the sun on the front steps and watch* them. Maybe plant some basil seeds, too. 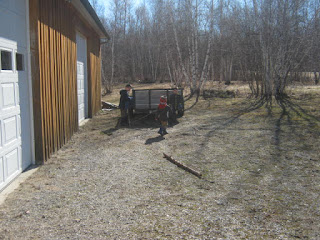 They made a catapult, and, this being the far north, there was still enough snow in the snow mountain for ammunition. 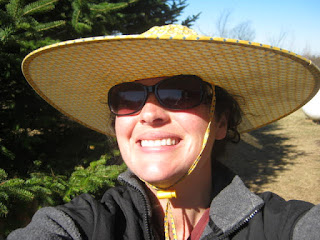 * Mostly to make sure Jack doesn't decide to go walkabout on the road. A good decision this morning, as our mail lady stopped to deliver mail and also handed out lollipops, which resulted in a free-for-all at the mailbox. I've never lived in a place where the mail person somewhat regularly leaves candy for kids. It may not be the most nutritionally sound gesture, but it sure is nice. Of course, our mail lady is also the kids' principal's mom, so basically it's all like one big family around here.

Sugar and Spice/Snips and Snails


Oh hey, guess what? It appears I can make a girl baby after all!

This fourth baby (due, incidentally, on October 16) is a girl. Sugar and spice, here we come! Though with three big brothers, I suspect she won't be able to avoid the snips and snails* part.

* A not-very-definitive explanation of what "snips" might actually be is here if you're interested, which I was.

The Promise of Garlic

Last October, I planted a couple dozen cloves of garlic. I had no idea if that's standard procedure in this climate, or if the cloves suffer from the cold, or what. All I knew was that it was fall. Fall is when I plant garlic. So I did.

I managed to scavenge enough dead plant material from irises and so forth to mulch the bed, in the hopes of protecting the cloves from the severe winter weather.

We certainly got the severe winter weather, with a vengeance.

A couple of days ago, A. announced that he saw the first shoot of garlic poking up.

Yesterday, Cubby came inside complaining that it was too hot to play outside. So A. told him to take off his shirt. He did.

Today it is 73 degrees. Jack is in a short-sleeved shirt, which is very confusing to him. He keeps trying to pull the sleeves down to cover his arms.

He helped me rake the mulch off the garlic bed today. We found that at least three-quarters of the plants have sprouted. I expect the rest will make an appearance today.

My faith in the garlic has been repaid. Spring is really here now.