Friday Food: I Got Root Beer in My Food

Long version: I don't know why I'm so lazy about making ranch dressing. It takes like two minutes and makes the children happy.

A. spent some time during Poppy's nap helping the boys put together these wooden cars from a kit Cubby got for Christmas two years ago. 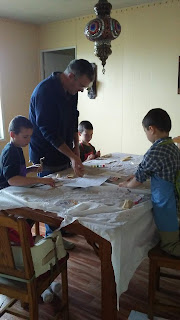 Promptness is obviously my first concern.

Long version: The pinto beans Miss Amelia makes are much, much softer than mine. I mean, I cook mine until they're soft, but because Miss Amelia just keeps the pot simmering on her wood-fueled cookstove all day, hers are already broken down and thus, perfect for refried beans.

All I did was cook a minced garlic clove in oil, then add the beans with some salt and mash them with my potato masher until they were mostly smooth and thickened. They were way better than you would think mashed beans could be. Yum.

Cheese sauce was one of the first things I learned to make, and despite the fact that I make it maybe once a year now, I still remember the proportions.

I used a bit of some low-fat, low-sodium American cheese (yeah, yum) (but not really) that Rafael had given us, and the rest was sharp cheddar.

The cakes were Cubby's idea. I was totally going to punk out on the Sunday dessert and just give them some of the candy left from Valentine's Day, but then at like 3:30 p.m., Cubby asked if he could make cookies or something from his cookbook.

I told him sure, but only if he could make them all by himself AND clean it all up.

First he said, "Maybe I'll just make cupcakes." HA HA. "Just" cupcakes. Cupcakes are a pain in the ass. I don't even make cupcakes except under duress. Try again, Cubby.

So then he found a recipe for Fudgy Mug Cakes or something. You know those kind you make in the microwave? They're easy! They're fast! I have made them myself!

Yeah, the one I made hadn't been developed by the entirely-too-fussy people at America's Test Kitchen. Two bowls, many ingredients, five overflowing mugs, and twenty minutes later, I concluded it would have been easier to just make an entire chocolate cake. Would have tasted better, too.

The children enjoyed theirs, though, and Cubby did trick me into making a dessert, because there was no way he was doing all that by himself.

Charlie and Poppy both woke up early and spent some time making Poppy soup: 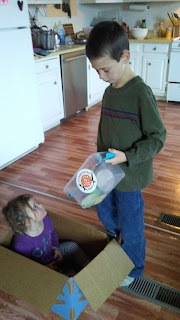 Long version: I've started buying those bags of frozen stir-fry vegetables. Mostly I buy them for back-up vegetables when all the fresh vegetables are gone and there is no trip to the Outside World imminent. They don't taste as good as fresh vegetables, obviously, but they work for their intended purpose.

This is the first time I've actually used them for stir-fry, however, and I must admit it made the whole process incredibly easy.

I used the mix that has green beans, broccoli, carrots, bell pepper, onion, and water chestnuts in it, to which I added some peas. All I did was cook those in a pan with oil, add two leftover hamburger patties that I diced up, and then some soy sauce, vinegar, ginger, and peanut butter. It was delicious and so fast I could make it after work. Yay frozen vegetables.

The eggs were for A., because there wasn't quite enough stir-fry for everyone. And for Charlie, who doesn't like stir-fry.

Charlie came home with a two-liter bottle of root beer from the school pep rally a couple of weeks ago. I wish he hadn't--why is the school handing out large containers of concentrated sugar to kids who definitely do NOT need more energy?--but I couldn't just throw it away. It was his, after all.

I did let the kids have a bit of it (only Charlie and Cubby actually drank it, though), and then I decided I should try to find another use for it. Like cooking it with a pork picnic shoulder.

I shredded the pork, mixed it with some mustard, and browned it under the broiler, so it wasn't inedible or anything, but I will definitely not be repeating root beer with pork.

Long version: The combination of work, 4-H, and an Ash Wednesday Mass resulted in the whole family getting home after 6 p.m. All I could do was heat up leftovers in the microwave and throw them on the table as quickly as possible so Poppy could get to bed and her brothers could get to their homework.

Long version: The kids had leftover pork with potatoes and cheese. I put my pork in the salad with some leftover peas and sweet potatoes. I might actually have to cook new food now.

Step on a Nail, Break Your Mother's Tail?


How's your tailbone, MiL? Intact? Because your son just stepped on a nail.

This isn't a huge deal--I mean, other than the significant pain to A. caused by a nail puncturing his foot--except for the fact that here in Extremely Rural America, the nearest tetanus shot is 60 miles away.

A. needs one, though, because his last tetanus shot was 15 years ago when he tried to catch a falling pane of glass while fixing windows and sliced his hand to ribbons.

He knows trying to catch glass with his bare hands was not the brightest move he could have made. His instincts, however, are much faster than his thought processes.

There is actually a clinic just ten miles away that's open to see a nurse practitioner two days a week, and today was one of the the days it was open. Unfortunately, the nurse practitioner wasn't in yet and the receptionist didn't know if they had tetanus boosters, and the clinic 60 miles away definitely DID have it but were closing at 11 a.m., so . . . off A. went to drive two hours for a tetanus booster.

Luckily, the puncture was in the foot he doesn't use to drive, so he can still drive the school bus. Good thing, as there really isn't a substitute bus driver.

And, well, I guess that's it. Nails hurt (as if you didn't already know that) and it's important to keep your tetanus vaccinations up to date. If you're anything like A., that is.


I have mentioned before that I just can't get behind Shrove Tuesday pancakes as a great indulgence before Lent starts tomorrow on Ash Wednesday. I mean, sure, pancakes are delicious and all, but are they really the most indulgent meal to have before forty days of penance? We can eat pancakes during Lent. In fact, we probably will eat pancakes during Lent, on a Friday when we're not eating meat.

And so today, we will not be celebrating Shrove Tuesday with pancakes. We will be celebrating with a large chunk of fatty pork and mashed potatoes. Laissez bon temps rouler, as my people would say.

How about you? Do you have any good day-before-Ash-Wednesday traditions?
Posted by Kristin @ Going Country at 10:18 AM 7 comments: