Long version: Elk meat simmered until tender in a sauce of tomatoes, onions, garlic, and a lot of paprika, then I added in some already-cooked potato chunks and sour cream. Ta da! Goulash. With elk. It was pretty good.

Long version: The hunk of elk I happened to pull out of the bag lended itself well to pounding thin and quickly searing, so that's what I did. I didn't season the steaks except for with salt, pepper, and garlic powder.

I am not a proponent of letting children eat ketchup with everything. Ketchup is reserved for hamburgers, meatloaf, and french fries in our house. But I did allow them to dip their elk in the ketchup this time. They're getting kind of tired of elk, so I thought they could use a little incentive to eat it.

Garlic bread is also a good incentive. They'll eat anything on their plates if they know they can get seconds of fresh garlic bread. Who wouldn't, right?

Long version: I was sort of going for a lazy re-creation of this casserole that everyone liked so much, but since I made it with leftover hamburgers, leftover potatoes, and leftover roasted onions, and also didn't have bacon or use eggs, it was definitely not as good. Cubby ate three helpings, though, so it was certainly palatable.

Can you tell I was pretty much out of fresh vegetables? Yup. And that's why God created frozen vegetables. Or rather, why Clarence Birdseye created them.

Long version: A. made a stew out of pigs' feet, posole (hominy), and chiles. All the children ate the posole part and at least tried the feet, because if Daddy's eating it, it must be good. They also ate some of the leftover cheeseburger casserole.

And here's the foot-cooker himself: 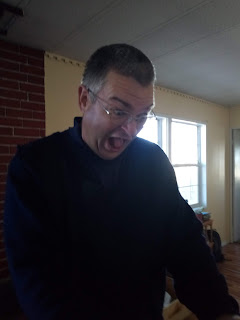 This is A.'s impression of the face people make when they're "unboxing" things for Instagram (which I totally don't get). It made me laugh for about five minutes straight. Luckily, A. is not on Instagram.

Long version: In an effort to appease the children, who are starting to get rebellious about eating elk, I made homemade tortillas, even though it was a weeknight.

They still weren't too pleased about the elk, but they ate it. And then some extra tortillas with just cheese.

The squash was a bag from the freezer that I figured I should start using since I put it there a few months ago. It wasn't one of the most flavorful squash, but it was fine. And this week has been slim pickings for vegetables of any kind, so it seemed a good time to use it.

Long version: After a day of both work and a 4-H meeting and not getting home until almost 6 p.m., the best I could do was put together leftovers in a skillet with grated cheese, nuke some frozen corn, and call it good.

It wasn't actually that good, but it was edible and everyone was hungry, so it was good enough.

And now for a random photo break! A. took Cubby, Charlie, and the dogs to our neighbor's canyon a couple of weeks ago to explore the bottom and took this photo: 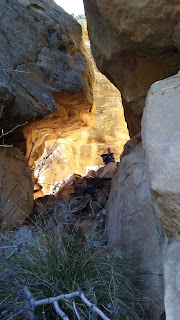 The children don't show up so well in the shadow, but isn't the light behind them fantastic?

Long version: It all started with the brisket. It was the first thing I came up with when I looked in the freezer for something besides elk. I put that in a pan with water, ketchup, mustard, vinegar, salt, pepper, and garlic powder, covered it tightly, and cooked it at 300 degrees for several hours.

Since the oven was on, I put in the last of the big gray-green volunteer squash to cook. That I just cut in half, de-seeded and put upside down on a pan with a bit of water to cook.

I was already simmering some of my never-ending stock of pinto beans, so I decided to use the oven even more and make some baked beans: pinto beans, diced onion, maple syrup, vinegar, ketchup, mustard, and water. I would have put in bacon if I had had some.

And then, since I had most of an onion left after using some in the baked beans, I sliced it thinly and put it in the oven to caramelize.

Everyone was very happy with this meal. Probably mostly because it wasn't elk, but it was really good. The onions with the brisket were fantastic. The baked beans turned out well, although everyone agreed they weren't as good as Grandma Brown's.

Gloom in the Refrigerator


Our refrigerator lightbulb burned out a couple of days ago. In the grand scheme of things, this is a minor inconvenience. But there is something very discouraging about opening the refrigerator door and peering through the murk to find food.

Given how often during the day I have to open that door, that's a lot of hits of minor discouragement.

Thankfully, we had already planned a trip to the Outside World this weekend, so I can replace it relatively quickly. And I bet it's going to be a real mood-booster for a few days every time I open the refrigerator door and see that cheery bulb lighting my life once again.

The State of the Garden

I know those of you in the frozen north--or the slightly-less-frozen-but-still-not-verdant eastern part of the country--are thinking, "Garden? What? It's January, crazy person. Nothing is growing."

I know you're thinking that because I used to live in both the frozen north and the slightly-less-frozen east. I remember the frustration of January and February. Months in which the only gardening happening is in one's wistful imagination as seed catalogs are perused.

But now? Now I live in New Mexico, Land of Enchantment and Surprisingly Powerful Sun. Even when it's cold outside, the sun makes it . . . not as cold.

And so, things are growing. Things inside and outside.

Okay, so mostly the things growing outside are weeds, but still! Green things! Outside! In January!

Also outside are some tiny lettuce plants that sprouted in the framed bed I had the lettuce in last year. I let those plants go to seed, then shook some of the seed right back into that bed. A. put some old windows over the wooden frame to help the soil warm up, and sure enough, there are at least three lettuce plants that have sprouted in the last two weeks. I expect more will be sprouting soon, too.

I'm very excited about this development.

A. also planted some arugula, collards, and squash seeds as an experiment to see if we can simulate the vigor of volunteer plants. They haven't done anything yet, but we expect great things from them.

The lettuce outside means that I don't need to start it inside this year. Instead, our fancy seed-starting equipment is being used for Cubby and Charlie's Megaton cabbages and free basil. 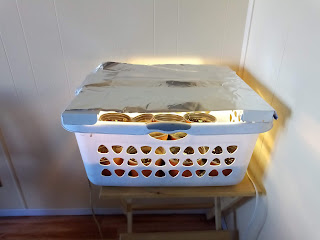 The broken laundry basket and old florescent lights have been improved this year by aluminum foil to trap the heat and reflect the light. Because A. is nothing if not innovative. 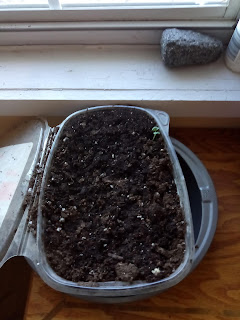 The lone sprout is another cabbage that came up later than the others and is awaiting transplant. The basil is in there, too, but it hasn't come up yet because I just planted it yesterday.

The next seeds to be started will be tomatoes, although I'm not sure where we're going to put all of these as we transplant them into bigger containers. Oh well. Something will come to me. I know I have at least one more broken laundry basket around . . .