For the Love of Pesto

Pulling basil leaves off the stems is the most tedious part of making pesto. Luckily, I have two small boys with nimble fingers who are extremely fond of pesto. 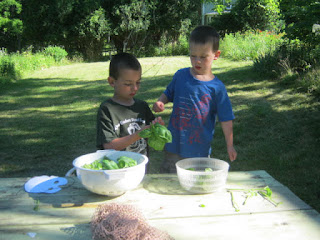 Call me when those stems are stripped, kids.

Next up: Teaching them to tie up tomato plants.

Yesterday while Jack was napping and the other two were outside planting peas in an old burn pile (or something--I could never be accused of being a helicopter mom), I wandered out with a large colander, a pair of kitchen shears, and a carton to do some harvesting.

First I picked some mulberries, because I like to make sure my hands always look as if I just finished butchering something. Then I used the shears to cut off all the garlic scapes, and while I was in the garden, I harvested some of Cubby's snow peas*.

As I was heading inside, I noticed a single white peony still on the bush and decided it would be much better appreciated inside the house, so I cut that too, along with some roses so the peony wouldn't be lonely in a vase. 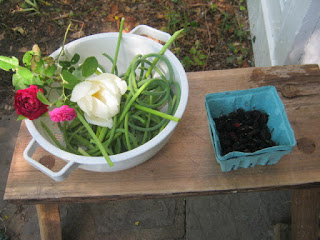 I decided to put the roses and peony on the kitchen table . . . 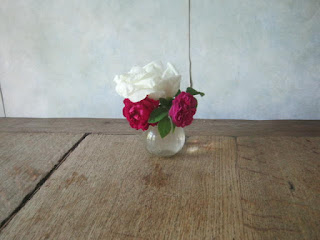 But then I needed some flowers for The Long Table, so I cut some of the feral day lilies growing along the edge of the gully. Plus some ferns, because I like to pretend I can create actual arrangements instead of just random flowers in a vase. 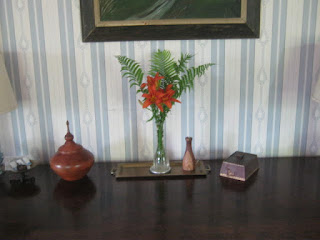 The lilies looked nice yesterday, but closed up at night and haven't opened again yet, so the effect is not so good at the moment. So much for my actual arrangements.

Half an hour of picking and snipping, and we had food and pretty flowers. And a mood booster for me. Wins all around.

* I stir-fried these two together for dinner last night and it was really good. Winning combination, should you ever happen to have both in sufficient quantities to try it.

** I learned this word from the movie The Matchmaker with Janeane Garofalo, a movie I loved years ago but haven't seen in about fifteen years. Can't remember anything else about the movie, but that sure is a good word.

Labels: all about me, Blackrock, country livin', fun with food, gardens, randomness

The Next Generation Doesn't Have Ice Cube Trays

It was pretty hot when my family was visiting last week, so there were a lot of children requiring cold drinks to sate the thirst resulting from running around like crazy people. My eight-year-old niece appeared in the kitchen requesting ice water, so I pulled out the ice cube trays to fill up a water bottle for her. She took a look at my plastic ice cube tray and said, "Hey, cool."

She had never seen an ice cube tray before.

She lives in Arizona, where almost everyone has a freezer with an ice maker built into it, I suppose. So I showed her how it worked, and she watched with totally unfeigned interest as I twisted it to break the cubes out of their molds, pried them out with my nail, and re-filled the tray at the faucet.

I should have taken her upstairs to show her her great-grandmother's rotary phone, which we use because it doesn't plug into an electrical outlet and thus functions when the power goes out. That really would have blown her mind.

Labels: all about me, confessions, country wisdom, family, randomness

The Raising of the Boat

Several years ago, A. went through a boat-building phase. He would make boats out of boards and plywood. They were very sturdy, but also very heavy and thus, difficult to drag up onto the beach away from the water. This is why they all got pulled into the lake during storms and wrecked eventually. One of the smaller boats was pulled into the lake and then appeared on our neighbors' beach a few days later. And there it stayed, mired in the gravel and filled with rocks.

A sad fate for a once-proud vessel.

Then, a couple of days ago when my family was all here and down on the beach, the children all meandered down to the boat and started playing in it. 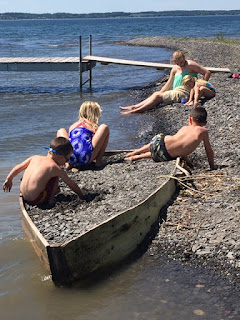 What's more fun than a boat full of gravel?

I believe it was Cubby who suggested they should try to dig it out. The kids started burrowing industriously with hands and sticks while the adults watched and made no effort to help because, well, it was hot in that sun and what were the odds that the boat could actually be dug out and would float if it was?

But then my sister-in-law started to help Cubby dig out one of the oars he had almost freed, because she's nice like that, and before I knew it, there were actual shovels on the beach and my brother was showing them how it's done. 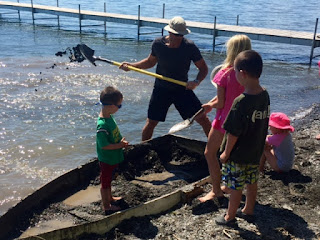 This is what a beach vacation looks like a Blackrock. 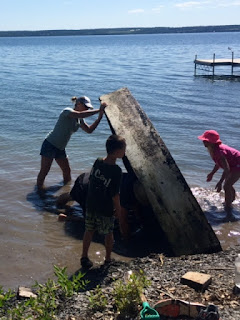 They actually loaded all four children into the thing and towed it in the water down to our beach, so I guess it even sort of floats. A great testament to the strength of the boat.

So here's to the boat builder who built a boat that could withstand four years of being partially submerged in rocks, and especially here's to the tenacious crew who raised her from her watery grave.