For some time now, Cubby has been talking quite clearly in single words, but not quite stringing the words together to form a sentence.  Until this morning.  I think.

He had his hammer and was standing there with it, looking as if he might be contemplating hammering the coffee table.  So I suggested to him he should go to his toy box and get out the bench with the pegs so he could hammer on that.

He looked at me for a second and then said, "Mom?"

And then, quite definitely, he said, "Get it."

Am I hearing this correctly?  My child's first sentence was a peremptory, "Mom, get it"? Swell.

I, of course, replied that Cubby could get his own bench from the toy box.  Which he did.

I'm not counting this as the first sentence, however, both because I would really like his first sentence to be something nice like, "Mom, love you,*" and also because there was that pause in between the two parts of the sentence.  So technically, it doesn't count.

I fear, however, that this is the sentence that will go down in family history as the earliest spoken indication of Cubby's character.  Much like his father's first sentence--"No, don't want to!"--was a pretty reliable indicator of his personality for the rest of his life.

Maybe we should encourage Cubby to join the military.  Then he could become an officer and tell people what to do all the time.  But until then, he's out of luck.

* There is about as much chance of this, I fear, as there is a chance that I will retrieve a peg bench in response to a command from my two year old.  That is, none.

Hey, anyone remember that whole baby gestating thing I have going on?  Yeah, well, in addition to the thousand other ways it's going to alter our very existence (TWO children?  whose idea was this again?), I cannot for the life of me figure out the garden for this coming season.

There will be a garden, that is not the question.  The question is, how much garden and what will be in it?  I can't see how I can manage the whole space we have--which is almost 2,000 square feet--even with the participation of A. and the MiL, both of whom have said they'll step in more.

I appreciate their offers, but the reality is that they both work actual jobs and the garden has been my job. So what happens when I need some maternity leave from this job right in the middle of the growing season?  God knows.

There will be tomatoes.  But how many?  How much enthusiasm am I going to have for tomato canning while dealing with a two year old and a two month old?  I suspect not much.  But the prospect of going another winter with only these disgusting store canned tomatoes is not to be tolerated, so I think that must be a priority.

I haven't even sat down with the seed basket to see what I have.  When I do, I have to really try to be realistic about how much I can even get planted when I'm seven or eight months pregnant, much less harvest and maybe process with a newborn to deal with.

I suspect part of the garden will lie fallow this year and just get planted with a cover crop.  But I also suspect I will still end up doing too much and regretting it.  I kind of have a history of doing that, even when there isn't a new bundle of demanding, up-all-night joy gracing my life.

One year of gardening is a small, inconsequential blip in the grand scope of my life. But not to me.
Posted by Kristin @ Going Country at 3:51 AM 12 comments:

Labels: all about me, family, gardens

Last night around 5 p.m., I asked A. if he was hungry, meaning should I start making hamburgers from the ground beef I had taken out to thaw.  He said no, not really, because he had eaten at the Chinese buffet for lunch.  I wasn't hungry either, so I decided to just make Cubby a couple of eggs for his dinner, figuring A. and I would forage later for our dinners if we wanted to.

Here's what we ended up having for dinner individually:

A., despite his assertion that he wasn't really hungry, began preparing his dinner while Cubby was eating his odd collection of foods.  A. made two hamburger patties, between which he sandwiched slices of Brie cheese.  This, in turn, was topped with a fried egg, and that whole mess was finished off with ketchup and mayonnaise. He christened this incredible concoction "The Tower of Power."

The very thought of it made me want to throw up.  I may have been rude enough to actually say that out loud, which fazed A. not in the least.

After Cubby went to bed, I made myself a sandwich with sharp cheddar cheese, mayonnaise, and Dilly Beans. A., in what was undoubtedly fair play on his part, told me that that made him want to throw up.  He seemed particularly disturbed at the pairing of cheese and mayonnaise.  Is it really that weird to put mayonnaise on a cheese sandwich?  I always do.

And, on a completely unrelated note, the leftover sugar syrup from a jar of canned pears when mixed with seltzer tastes amazingly like cream soda.  I have no idea why that would be, but there you are.

Yesterday morning was warmer and rainy and the ground was covered in a very unappealing mixture of slushy snow, ice, and mud.

So of course Cubby and I had to go outside to play.  YAY.

Since it was well above freezing and the ground was quite soft, Cubby and I went into the garden for some more harvesting.  Parsnips this time, because it had occurred to me that I had not actually used a single one of the many parsnips out there and perhaps I should take advantage of the thaw to get them out of the ground without the aid of a pickax or a concrete wall and my own fit of rage.

So Cubby carried the bucket to the garden for me and placed the (ENORMOUS) parsnips in it for me as I dug them up.  Then, while he was wrestling with the bucket in an attempt to carry it out of the garden--the boy does love to lift things, just like his daddy--I decided to check the chicken nest in the hay barn in the garden for eggs.  There were two.

I grabbed the eggs and went back to Cubby, who was flat on the ground, having tripped on the hose in his way.  So I stuck the eggs in my coat pocket, hauled him up, got the scattered parsnips back in the dropped bucket, and went back to the house.

Can you guess what I found in my pocket when I reached in to take the eggs out?  Bet you can.

Yup.  One of the eggs had broken, coating my pocket in an exceedingly disgusting ooze of yolk and egg white. This is not something you want to feel unexpectedly with your hand, trust me.

It meant that I had to wash my coat.  Although, considering the bottom part of said coat was already muddy from my previous harvesting experience and every item of Cubby's outdoor apparel was coated in mud, it wasn't too difficult to make up a full load of dirty outdoor wear.

So that was yesterday.
Posted by Kristin @ Going Country at 3:45 AM 5 comments:

I have mentioned before Cubby's abiding fascination with tools.  He has not wavered in his devotion to tools of all kinds--preferably the sharp, dangerous ones he's not allowed to touch--but he has expanded his interests to what are essentially just really, really BIG tools. 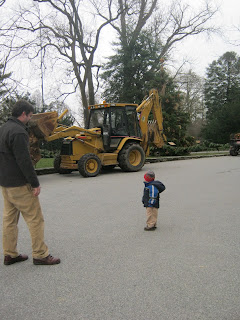 When we were at Longwood Gardens, the staff was working on some kind of big outdoor project near the house, so while I toured around the full-of-breakable-objects house, A. took Cubby outside to play. And there they encountered the excavator.  It was love.  Cubby stood there the whole time I was in the house watching the men working the machines, and he REALLY didn't want to go.  A. had to pick him up and bodily remove him from the scene of the machinery.

Perhaps we have a future heavy equipment operator on our hands.  Or maybe just a typical little boy who thinks anything with an engine is the greatest thing ever.
Posted by Kristin @ Going Country at 4:48 AM 3 comments:

And because I care so much about all of you, I will share my recipe for leek and potato soup as requested by Anna.

I happened to have some leftover bacon grease around, so this last time I made it I didn't use actual bacon.  But normally I dice a couple of slices of bacon, render out the fat, and then use the fat to saute the leek and onion.  And use the bacon itself in the soup, too, of course.

Anyway, however you get your fat, saute the leek and onion on low heat until they're very soft but not brown.  I think this last time I had about two cups of thinly sliced leeks (across the circumference, not lengthwise) and a diced medium onion.  The leeks are more sweet than onion-y, so they can use the boost from an onion.

When they're soft, I add about an equal amount of peeled, diced potatoes.  Use a variety that falls apart when cooking, like Russet.  The smaller the potatoes are diced, the faster it will all cook.

Add enough chicken stock, veggie stock, or a combination of stock and water to cover the vegetables.  Add salt, depending on the saltiness of the stock, and a bunch of pepper.  Simmer until it's all soft.  Puree it either with an immersion blender if you're lucky enough to own such a wondrous device (I am not), or in a blender or food processor in batches.

Put it all back in the pot and add some heavy cream.  I think I used about a third of a cup this time.  You can use milk, too, or a combination of milk and cream, but the cream is the best.  Of course.

And that's it.  It's simple, but it takes a deceptively long time to make, what with all those dirty vegetables and the irritating "puree in batches" bullshit.  Which is why you should just go ahead and make a big pot, because it's a wonderful thing to have as leftovers for lunch for days.

Or, you know, two days, if you eat it as fast as I do.  Whatever.  It's delicious and very heartening on a cold, nasty day.  And I GUESS worth the incredible effort involved in gathering the ingredients in late January.  If you have access to one of those new-fangled "grocery stores," it might be a wee bit easier to assemble your ingredients.  It probably won't taste as good as soup made with homegrown leeks and potatoes and homemade chicken stock from homegrown chickens, but still pretty damn good.

So go for it.  Make some leek and potato soup, and raise your spoon in a toast to Blackrock and the ridiculous lengths we go to for food.