Long version: I pulled the meat out of the lamb stew and fried it, mostly because Charlie dislikes anything stewed and I was disguising it.

For the pasta, I just used some more of the garlic scape and lamb's quarters pesto I had made the day before, plus the last of some pre-shredded Parmesan that's been hanging out in the refrigerator for a long time. How does it last that long without getting moldy?

Long version: Some of that cheap Sysco breakfast sausage fried and then combined with the leftover pasta, peas, and some shredded cheddar. Pretty good, actually. The kids really liked it. Unsurprisingly.

Long version: Success with the chicken! I salted the chicken heavily a few hours before cooking it, and then rubbed it with butter, thyme, pepper, and garlic powder right before putting it in the oven. I also shoved into the cavity some of the garlic stalks from a couple of plants A. had pulled up, and then, when I made a drink, I put in the lemon rind I had used.

It was another of those disturbingly large chickens, so I put it in the oven at 3 p.m. at like 425 degrees and left it there until 5:30, at which point it was definitely done.

I also put in some potatoes and the two heads of garlic A. had given me.

The high heat meant that the juices and herbs got scorched on the pan, though, so instead of of making a sauce with the pan juices I made one with some chicken stock, one of the heads of roasted garlic, and some cold butter. It was thin, but flavorful.

No dessert this Sunday because Miss Georgia gave the kids some M&Ms at church and then A. took them all to the mountains later and got them all a popsicle at some point. I figured the Sunday dessert had been taken care of, so I didn't make anything. 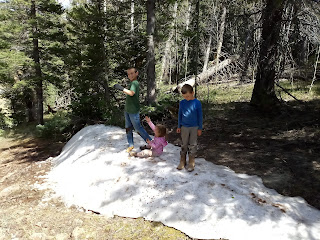 There was still snow in them thar hills. The children were pleased.

Long version: Browned sausage, diced leftover potatoes, a bit of diced chicken, some frozen peas, and the rest of the liquid from the sheep stew.

Definitely not exciting, but serviceable.

Long version: Everyone got bacon, but I let each child choose either eggs or beans. There was a fifty-fifty split, but who cares! The real excitement was the garlic bread the size of their faces.

I didn't mean for them to be so big. They look pretty small when I cut the dough up, but then they rose, and rose again in the oven, and then there were these big breads for each child.

They didn't mind. They didn't have any trouble finishing them, either. And they sure do have a good time kneading in their chosen spices: 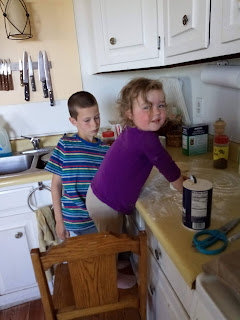 Long version: Jack brought me to the refrigerator in the morning to point out the sourdough starter jar that was overflowing its banks. So, since I had to take some of the starter out of the jar, I decided to make pizza for dinner.

I also had to harvest more garlic scapes, with which I made more pesto, so pizza seemed like a reasonable option.

I had already taken out some ground beef, so one pizza was ground beef--just browned and then mixed with some of the pesto--and onion, and one was just cheese.

For the sauce, I opened a can of pasta sauce that was in one of Miss Georgia's boxes of food. The pasta sauce had both high fructose corn syrup and MSG in it. It was . . . not very good.

I fixed it reasonably well by adding a small can of plain tomatoes and vinegar to it--to mitigate the sweetness--plus some olive oil and the pesto. It ended up being acceptable, although I would never buy that sauce myself.

Long version: I still had about a pound of ground beef left, so I added eggs, the bread crumbs I usually have in the freezer, milk, garlic powder, salt, and basil to make the meatballs.

The pasta sauce was the leftover pizza sauce, with cream added. We had spaghetti because that was the only kind of pasta I had left. Every child proclaimed spaghetti their favorite kind of pasta. They are actually getting old enough that the eating of the spaghetti isn't a complete mess. Well, except Poppy. She still makes a mess.

For the Graduates (And Everyone Else)

Dedicated to G. and all her classmates. Congratulations to the Class of 2020.

When my older brother graduated from college, I put together for him an abridged version of Walt Whitman's poem, "Song of the Open Road."

This is, perhaps, not the most usual thing for a 21-year-old to give to her 23-year-old brother, but what can I say? I was an English major.

The reason I put together an abridged version is because DANG, that is a LONG poem. And parts of it are, in my opinion, pretentious and unnecessary. (You didn't know I was a literary critic, did you?) But there are still so many good lines in it.

I revisited it this week because my eldest niece is graduating from high school this month.

And what a time to be graduating, right?

I still believe, though, that those first few lines of the poem are some of the most inspiring for anyone embarking on a new phase of life.

Afoot and light-hearted, I take to the open road,
Healthy, free, the world before me,
The long brown path before me leading wherever I choose.

Such optimism! Such breezy self-confidence!

So maybe that long brown path seems a little more treacherous these days, but the open road awaits for the graduates, there to be traveled. And that is still a glorious prospect. Even if it doesn't seem like it right now.

What To Do If You See a Lion


I found this piece of paper randomly on a kitchen chair the other day, written in Cubby's handwriting: 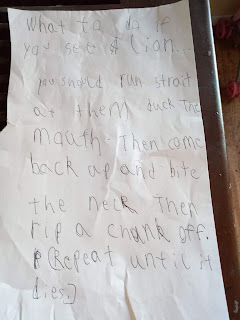 It reads as follows:

"What to do if you see a lion . . . you should run strait at them duck the mouth. Then come back up and bite the neck. Then rip a chunk off. (Repeat until it dies.)"

I have no idea what precipitated this instructional sheet. I can only be thankful we don't have any lions around here, lest my sons decide to put this advice into practice.