Friday Food: The End of the Tomatoes

Long version: A meal that was foreordained by the foods on hand. Dough from the bread I was baking that day plus some of Finny's sauce from a batch I had made to freeze plus asadero cheese from the freezer=pizza. A bit of lettuce in the refrigerator plus a bit of ranch dressing that needed to be used=salad. And the leftover pork for A. and me.

Long version: I get 50-pound bags of potatoes from the school Sysco ordering program. The variety of potato in the boxes is not the same every time. Last time, it was a waxy variety of potato. This time, it was nice big russets. That made me happy, because russets make much fluffier, and therefore more delicious, mashed potatoes.

I much prefer a vinagrette dressing for salads. The rest of my family does not agree, which is why I've been making ranch dressing most frequently lately. I decided to indulge myself with a vinagrette this time, though. Because I am a master of self-care.

Cubby usually chooses and mostly bakes our Sunday desserts now, but I decided on this one. Two reasons: One is that A. can eat it because it doesn't have any flour in it. Two is that we were almost out of eggs, and this doesn't use any.

It also doesn't hurt that it is insanely delicious. It's like a superior version of commercial peanut butter cups. The dipping in chocolate is messy and annoying, but the end result is most definitely worth it. I hadn't made it in a long time, and everyone is now thinking it would be an excellent permanent Sunday dessert. Which would mean this would be our Sunday night face: 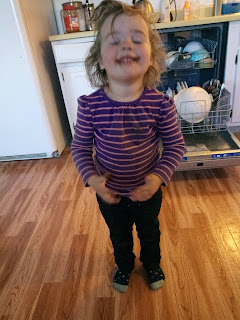 The chocolate-smeared face is a sign of great happiness.

Long version: Pork for A. and me, those frozen chicken patties for the kids, and nothing remotely exciting otherwise. Must be a workday.

Long version: We're getting pretty low on meat, which means I'm much more motivated to use the packages that have been sitting at the bottom of the refrigerator for a long time. Like the package of oxtail.

It's not really an ox's tail, of course. It's just the tail from the cow we bought almost two years ago. It looks pretty gross, since it's literally just a skinned and partially segmented cow's tail, but it makes excellent stock. All that cartilage, you know.

I browned and simmered the tail in the morning, then did the tedious job of pulling the meat off the bones. It never looks like a lot, but I got over a cup of meat from the tail. Enough for soup. Which is what I made, with the meat, the broth, onion, garlic, tomato, carrots, potatoes, green beans, and peas.

The kids thought it was hilarious we were eating a cow's tail. "Did it have poop on it?" they asked. Har har.

Grilled cheese to fill things in a little. Because a cup of meat in a whole pot of soup may be enough, but it's not a lot.

Long version: This was the very last package of actual meat from the cow we got two years ago. Now all that's left are nasty organ meats, fat, and soup bones. Time for another cow.

We were anticipating a freeze this night, and I decided it wasn't really worth covering the tomato plants again. So we harvested all the tomatoes, ripe or not.

Poppy and Charlie--who was home from school with a slight sore throat, but was otherwise fine--helped me. 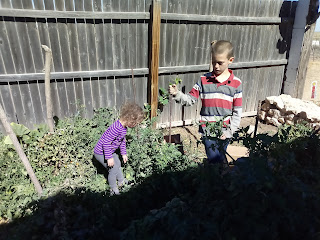 "These aren't plants!" exclaimed Charlie. "This is a jungle." Accurate.
Odin helped, too. 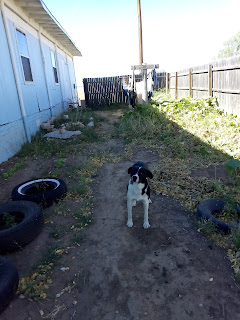 Well, he was willing, but his lack of opposable thumbs made him quite ineffective.
We harvested a lot of tomatoes--most of them green--but I didn't use any of them in the goulash. I elected to open a can of already prepared tomatoes instead of chopping up two cups of fresh tomatoes. Lazy.
I used my own sauerkraut, though! It was the sauerkraut Poppy and I started a couple of weeks ago. I just scooped out a cup or so and then covered the rest up to keep sauering.
Also our squash, of course. Forever.

A Journey of a Thousand Miles

I'm sure you're familiar with that profound little nugget of wisdom: "A journey of a thousand miles begins with a single step."

If you aren't familiar with it, now you are. You're welcome! Also, I looked it up to see where it came from, and it's attributed to a (possibly apocryphal) Chinese philospher.

The particular long journey we're going to talk about now began over a year ago when we bought the abandoned house next door. We only bought it because we didn't want anyone to move in right next door to us. We're real friendly like that.

A. had thought he might someday fix the house up, because it's a hand built adobe and stone house and A. is a self-taught stone mason, but it wasn't high on the list of priorities.

Cleaning the house out, however, sort of was.

The house had last been lived in by an elderly man who moved out to live with his granddaughter, and quite a lot of the contents of the house were still in there.

It was a little creepy, to be honest, what with the man's clothes hanging in the closets and personal things like poetry written by the granddaughter still on the walls of her bedroom. It was also disgusting, because all the old blankets and things had made very cozy nests for rodents. 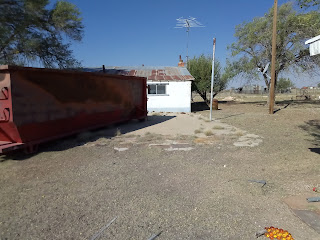 Here's that very first single step.
It looks like a big dumpster, I know. It is a big dumpster. There was a lot of get rid of.
Last Thursday, A. and I just dove in.
We began with the detritus in the rooms. Clothing, papers, stuffed animals, blankets, particle-board furniture . . .
Well. Why don't I let the photos tell that story? 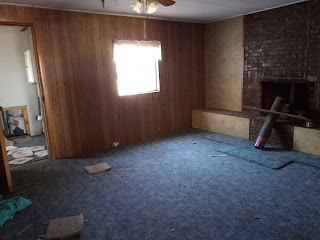 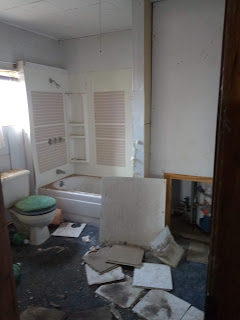 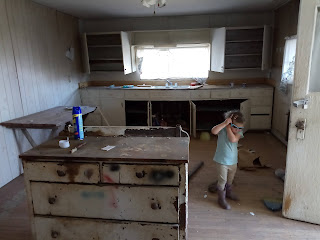 Kitchen (the least cluttered room in the house). 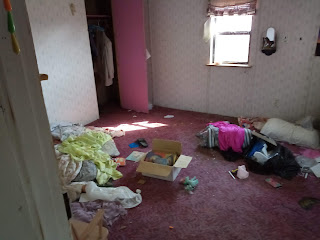 One of the three bedrooms.
It was so gross to be touching all that stuff. My face was set in a permanent expression of disgust the entire time.
But that was nothing to what came next, as A. started tearing out all the old carpet. 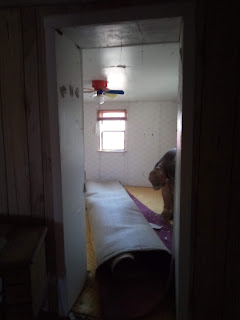 Good thing everyone has plenty of face masks around all the time now.
Getting rid of the carpets made an immediate improvement, because there are few things more filthy than 50-year-old carpeting. 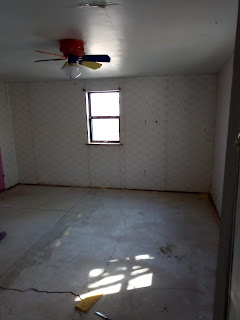 That same bedroom, minus the appalling pink carpet.
The dumpster was filling up rapidly. 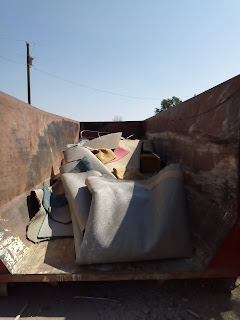 We are definitely going to fill this.
A. was on a roll--and also curious to see the actual structure of the house--so he then started pulling off wall paneling. It was the same kind of cheap particle board paneling that was on the walls of the living room in our current house when we bought it. And underneath, we found the same kind of perfectly acceptable walls that definitely did not need to be covered up with that nasty stuff.
In the case of the kitchen, there were actually two layers of paneling. 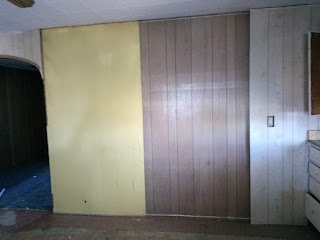 Right to left: The top layer of horrible grayish paneling, the middle layer of horrible brownish paneling, and the actual wall that was painted an appealingly cheerful yellow.
A. had to stop at this point, because he was exhausted from pulling up and hauling heavy carpets. But the demo was only beginning.
Stay tuned for when the ceilings came down. Literally.