Friday Night with the FFA

We went out last night. This is a rare occurrence. Especially for me. However, last night was the annual fundraiser for the Future Farmers of America. So we went.

Now, just where do you think the Future Farmers of America would have a fundraiser?

DINGDINGDING! Yes! On a FARM! Specifically, on a giant dairy farm, in that farm's absolutely enormous shop. Really. HUUUUGE. The shop has to be big enough to fit all the massive combines and other large machinery that are now a part of farming, so it's about the size of a high school gymnasium. And insulated and heated. Sort of. It even had bathrooms. Well, ONE bathroom indoors, which was allocated to the women. The men were directed to an outside porta-potty. Except it didn't look like there was any light out there, so I'm guessing a good number of the intoxicated males in the crowd--and there were many--probably just wandered into the dark and peed on the ground.

I didn't investigate, however.

The venue was none too big, because there were at least 300 people in attendance. There was good food (chicken barbecue--a local institution), giant tubs of iced beer and a whole table full of wine (sometimes being pregnant is kind of drag--this was one of those times), a silent auction, and . . . The Farmer's Challenge.

The Farmer's Challenge is a quiz contest. Think Jeopardy! for rural people. The questions were all about animals and tractors and stuff. Which meant I knew the answers to exactly four of the fifty questions--the miscellaneous category questions about movies and country music. Luckily, we were in teams, and A. and the MiL, plus a retired dairy farmer, were on my team. Unluckily, it was a really hard quiz and we only answered 23 out of 50 questions correctly. So we didn't win.

However, the winning team only got 28 correct, so we didn't do too badly. And the prize is a big, ugly trophy in the image of a grain silo. So, you know, no hard feelings that we didn't go home with that.

What we did go home with (from the silent auction) was a literal ton of grass hay (though we did not literally go home with it, as we were driving my car and a ton of hay is not going to fit in a Nissan), a giant container of Round-Up weed killer (with feed cap included!), many tickets to university sporting events, and some free Arm & Hammer products (baking soda, toothpaste, and deodorant--wheee!), because one of the organizer's best friends sells Arm & Hammer products and donated like $20,000 worth of products.

Chicken barbecue, beer, The Farmer's Challenge, hay, and free Arm & Hammer products. Does a Friday night get any better than that?
Posted by Kristin @ Going Country at 6:40 AM 18 comments:

An Ode to the Humble Oreo

There are some foods beloved in childhood that have not stood the test of time or the maturation of my adult taste buds. Case in point: Kraft Macaroni and cheese. Loved that stuff when I was a kid. Now it just tastes like chemicals. ORANGE chemicals. Yum.

However, there is one food that I still love with the same passion I had when I was a child. And that is the Oreo.

Oreos were a staple in my house when I was growing up. Our big cookie jar would just fit one entire package, and a full package was purchased every week. This seems like a lot, but there were five of us. And a few of us (I include myself here) were definite cookie monsters.

I don't buy Oreos very often anymore. Mostly because when I do, I eat the whole package by myself within a couple of days. I can somewhat justify this* by saying that this is the only time I will voluntarily drink a glass of milk. It's a rule I have for myself: I must drink the small glass of milk used to dunk the Oreos (until they're soft and mushy, but not falling apart--it's a delicate balance). Therefore, Oreos mean calcium. It's for THE BABY!

Enough about me. What about you, duckies? Is there a beloved childhood food that you still love? Or one that you now loathe?

* Except not really, because I am not completely delusional.
Posted by Kristin @ Going Country at 5:27 AM 16 comments:

Labels: all about me, confessions, family, fun with food

I need to keep a professional photographer on staff*. That way, when I tell you that there was heavy fog this morning and it all froze into a surprisingly beautiful covering of hoarfrost on everything, I might actually be able to post a picture that shows you what I'm talking about.

It really is pretty, though.

* "On staff." What a joke. The staff around here consists of me and A. And they're volunteer positions.
Posted by Kristin @ Going Country at 5:35 AM 6 comments:

Labels: all about me, confessions, weather

I've been thinking a lot about clothes lately. Mostly because mine have become so annoying. I am officially in Maternity Wear. And let me say this about maternity pants: They always feel like they're falling off. Seriously, I spend all my time yanking my pants up. It's very attractive, I'm sure. Even MORE attractive? When I wear A.'s old clothes for manual labor, so I don't ruin my so-called "nice" clothes. Let me tell you, there is nothing more appealing than a woman in an extra-large long sleeved t-shirt and paint-stained men's khakis.

You know what I miss most from my previous, normal wardrobe? My flannel-lined jeans. They are also quite ugly, but at least they stay UP and keep me WARM. And I can't wear them this winter. This saddens me. They are, despite their ugliness, my favorite item of clothing.

I still remember my favorite item of clothing when I was in third grade, by the way. It was this pale yellow sweater with three pastel-colored (blue, pink, and green) bows in the center of it. I wore it for my first day at my new school in Alaska. I was totally stylin'. Yes, in a pale yellow sweater with bows. What can I say? It was the 80s. And I was eight years old.

I think today I need to stop making it all about me and instead ask YOU to share with ME your most favoritest item of clothing. So what about it, duckies: Woolly socks? Flannel p.j.'s? The perfect t-shirt? Kick-ass boots? What makes you happy whenever you wear it?
Posted by Kristin @ Going Country at 5:49 AM 22 comments:

Labels: all about me, baby stuff, randomness, the A team 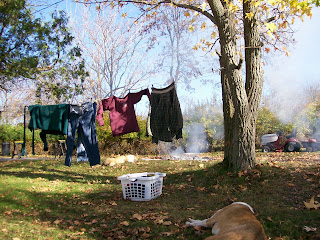 Laundry, burning leaves, seemingly dead dogs in the sun . . . yes, we've seen this before.
Then again, some repetition is inevitable, I suppose. I mean, this IS post #600.

It was a wonderful Indian summer day yesterday, 60 degrees and sunny all day. So how did we celebrate? With manual labor, but of course! This IS Blackrock, after all. There was much raking and burning of leaves, laundry on the line, and gutters cleaned.

And about those gutters.

This is a task that in the past has fallen to me. It is a disgusting job, what with all the rotted plant material and insects that have collected in the gutters. Also a precarious job, as some of the gutters are pretty high. Also a tedious job, as the extension ladder gets inched along the miles of gutters, with the gutter cleaner ascending and descending the ladder multiple times. And this year, since I think climbing extension ladders is not on the list of Recommended Activities While Pregnant, the nastiness, precariousness, and tedium was ALL A. All I did was steady the ladder and sweep up the mess afterward. It was great. I think we should do it this way every year.

Yesterday A. and I attended the craft fair put on annually by the MiL's church. This is actually the first year I've gone. While I am filled with admiration for people who can craft, I do not generally find a lot of use for craft items. However, I felt it was time for an outing (yes, the craft fair TOTALLY COUNTS--in my cloistered life, anyway), so away we went.

It was way bigger than I expected. It's held at the local high school, in the school's gym, lunch room, and front entry hall. There were something like 50 vendors there, selling everything from knitted items to pottery to wood furniture. We walked through the whole thing, admiring many fine crafts, and what did we buy? An old, rusty metal snow shovel for 50 cents. Because of course we did.

Then we came home and I managed to convince A. that it was a fine time to work on getting a headboard on our bed frame. Now that it's cold and the condensation is starting to drip down the wall behind our heads at night and all. I wanted a headboard on the bed before we got to the point that our pillows were freezing to the wall.

How I wish I were joking about that.

But instead of just going to the store and buying a bed frame with headboard included, like NORMAL people, we instead spent two hours disassembling A.'s childhood bed frame (a double) so we could scavenge the headboard and re-attach it to the cheap metal frame that came with our bed (a queen). This required drills and hammers and extra boards and all other kinds of fun. Most of which was done by A., while I did things like wipe thick layers of dust off of every surface we uncovered (GROSS) and attempt to hold things steady while he drilled (I mostly failed). Then we put up the MiL's old bed in the room A'.s old bed had been in, since the MiL now has the high four-poster bed that used to be in the north bedroom before we painted that room and moved the bed out so there is NO bed in the north bedroom anymore.